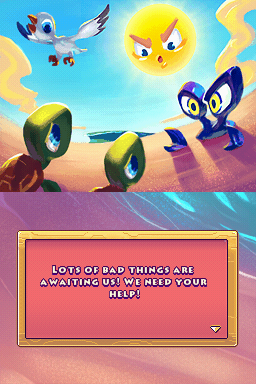 Made by the pioneering bunch at Sabarasa, Save the Turtles is a new DSiWare exclusive puzzler with real heart; a match 3 with a difference, Save the Turtles asks players to line up rows of 3 or more similar turtles so that the waves can sweep them away to safety. The only available game mode to play from the start is ‘Save the World’ which in a sense is the story mode of the game, where you play through 32 different real-life locations, the game gets progressively more difficult as the number of turtles that you must save rises and you discover more species to save as you travel across the world saving turtles.

Of course lining up turtles isn’t as easy as it sounds, not only can they get so hot in the sun that they are unable to move, but there are also every-day issues that turtles face such as oil spills, turtle-eating crabs and hungry birds that will attempt to thwart your every move, it works cleverly by limiting the movement of your turtles to simple L shapes, however you can move your turtles as many times as you wish, as long as there are no obstacles in their path. An extra added bonus with matching more than three turtles is that by rescuing six or seven you are rewarded with a momentary solar eclipse that removes the threat of the sun.

After playing around an hour of ‘Save the World’ you will unlock two modes, Quick Game; which is rather self-explanatory, and Tidal Wave where you are working against the clock as the waves no longer react to a turtle match-up, instead waves come and go randomly as they please, however you lose time off your clock if you don’t save any turtles when a wave comes, so you’ve got to think and act fast; this mode is actually quite well done, and in some aspects works better than the ‘Save the World’ mode. 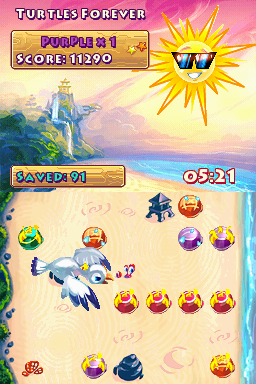 Finishing ‘Save the World’ unlocks the game mode ‘Turtles Forever’ which is practically a survival mode; you start with a set amount of time, saving turtles rewards you with extra time, as well as occasional power-ups. ‘Turtles Forever’ begins easy with one variety of turtle, slowly adding more as the game gets progressively difficult.

On top of the four varied game modes there is also a set of six trophies that you can unlock via special feats, such as obtaining 20 Gold rankings in ‘Save the World’ or finishing all 32 levels to keep you playing as long as possible, but with the quick game and survival mode, or even the bronze, silver and gold rankings in ‘Save the World’ there is oodles of gameplay in Save the Turtles to keep you glued to your Nintendo DSi.

Save the Turtles is both addictive and challenging, and combines a well thought out puzzler with cute animations, and tropical music, and for a mere 500 points; the equivalent of £5 you are getting a game with the value of at least £20. If you are a fan of casual puzzle games like Jewel Quest or Bejeweled and feel like a change Save the Turtles is definitely worth a purchase.