The Penal Zone is a welcome return to the crazy universe of Sam and Max; focusing on the invasion of General Skun’ka’pe; an intergalactic criminal warlord man-ape who is searching the universe for a box of toys.. oh yes and the toys are psychic, and so is Max, as always there is a running theme with the series which this time appears to be keeping to a B-movie aesthetic, with a Narrator the likes of The Amazing Criswell, who narrates our episode, I expect he will be sticking around. 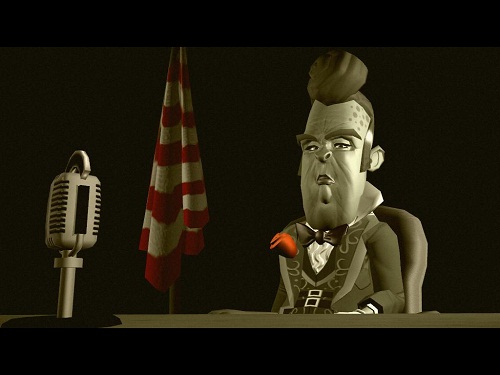 Sam and Max’s universe has changed since we last saw them; Max is still President, Bosco has gone to Las Vegas with Bluster Blaster; the arcade machine from C.O.P.S, Sybil and Abraham Lincoln are still on their honeymoon, Stinky and Grandpa Stinky are still at the diner, and currently Sam and Max’s office is cordoned off. There is the addition of a few locations, which may or may not become a regular in this series, with Dr. Momma Bosco’s Science Lab, seeming the most likely to be a regular location. The Straight and Narrow has had a slight overhaul also, the streets are now grimy and falling apart, Bosco’s is boarded up, and the C.O.P.S have taken residence in the DeSoto, offering the new service of the Crime-Tron; a nifty scanner that will take two related pieces of evidence and create a new location on your map that is integral to the case, which was used a couple of times in the episode, and will likely be seen for the rest of the season.

I'm sure that you all want to know about the psychic powers however! Max infects his mind with psychic powers when he finds one of the psychic toys; a 3D View Master that gives him the ability to see into the near future, the psychic powers actually work really well, and we are shown three different psychic powers in the episode through the deranged mind of Max; who apparently sees apparitions of cows, bananas and all host of random objects floating around daily life, the power that you will probably see the most use of is the Futurevision; which is extremely handy for solving puzzles; by using the Futurevision on a certain person or object you are shown an event in the not too distant future that involves Sam and Max, and works very much to your advantage if you are stuck on a puzzle.