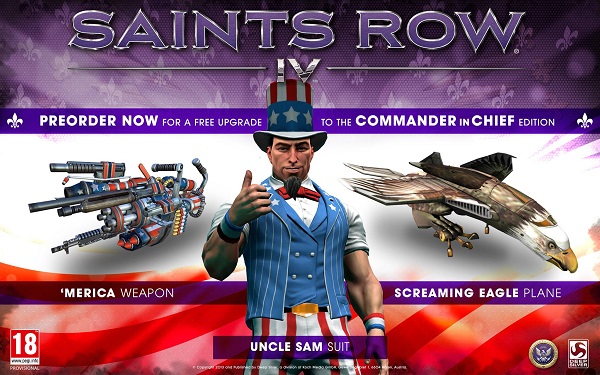 The Commander in Chief Edition will be available as a pre-order for the latest in the Saints Row franchise and gets a limited edition American 'Uncle Sam' uniform kitted out in the classic red, white and blue, as well as some ridiculously overpowered weaponry that the 'Merica Weapon provides; including mini-guns, flame-throwers, machine guns and rocket launchers, and the Screaming Eagle Plane so your alien enemies will know that you are there to free the world as you fire rockets out of its talons, and invoke the Sonic Scream attack to leave your enemies dazed and confused.

In Saints Row IV the head of the Saints has been elected to the Presidency of the United States, however a catastrophic alien invasion transports the gang to a bizarro-Steelport that you will have to escape whilst defending yourself from the invading alien empire the Zin with superhuman powers and an arsenal of alien weaponry.

With more ridiculous crazy action, enhanced customisation, and the ability to leap over buildings, outrun cars and send enemies flying with telekinetic powers it is set to be the most insane instalment of the Saints Row series yet! Saints Row IV is scheduled for a release August 23rd 2013 on Xbox 360, Playstation 3 and Windows PC, be sure to keep your eyes opened for when we get our eyes on the game at E3!