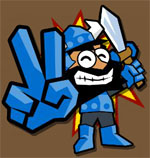 Did you play Peggle to death but were left wanting something that wasn't such a game if chance? Well Parisian developer Dancing Dots have made something that may please you if you're up for a challenge. Rotastic; originally an IGF competitor for the 2011 competition was picked up by Focus Home Entertainment, and released for XBLA and PSN very recently.

I won't make any promises; Rotastic is not Peggle, it's actually quite tough to give the best analogy of it. You could say Rotastic has taken chunks of different games and merged them all together to make a fun and entertaining experience. The goal is set out at the start of the level and will generally consist of collecting a certain number of gems or surviving for a set amount of time, or every so often asks you to defeat an enemy in a versus style game. There are also missions spread across the game that teach you combinations of movements on your rope that give you bonus points, so performing a figure of eight or making a triangle in one swoop will get you extra combo points. To be good at the game you simply need an eye for timing and physics, as your button presses will be key on getting the right momentum required to pick up the gems. 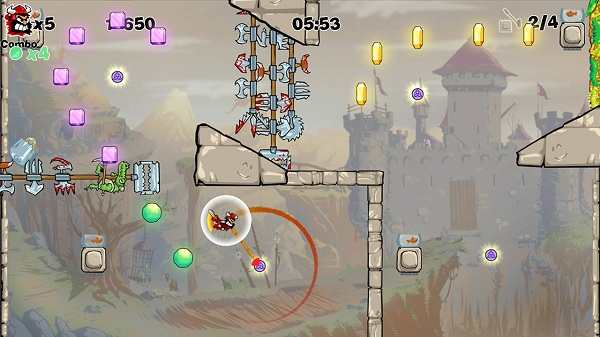 From the start of the game you can only play as Fraghar, your average bearded Viking, who oddly reminds me very much of my father, in beardy appearance anyway. As you progress through the game you'll unlock other characters and different costume variations that differ between colour. If you do decide to change character mid game, you'll be glad to know that it will still continue within the same save game as opposed to force you to start a new story. The characters themselves don't seem to actually make any difference when it comes to playing the game but are a nice visual change for if you're getting bored of Fraghar in blue.

The scoring system is pretty simple, at the end of the level you're given either a bronze, silver or gold or the ultimate Viking helmet, your reward is based on your end score result which is based off time remaining in the level, your score acquired in game and your remaining lives. Even if you do really quite badly in a play-through you still manage to come out with a pretty big score, but the bronze, silver and gold helmets do require large score to attain them.

In order to give a bit of variety to the game you won't just be swinging on basic anchor points getting the same gems throughout the whole game. There are moving hooks and ones that burn your rope out after so long, then requiring quicker reaction times to swinging. As well as a variety of anchor points you also have other things to help you across levels to collect those gems. One of those things is sticky stuff, which works really well, although sadly when you're first introduced to it, it's very much overused in the exact same way across a level that makes it feel less of a fun mechanic and making it more menial and dull. Plus you've then got anything that gets in your way and can potentially kill you, these can range from rotating buzz saws, spikes, burning wood, men being shot out of canons or even giant fish-like dragons. 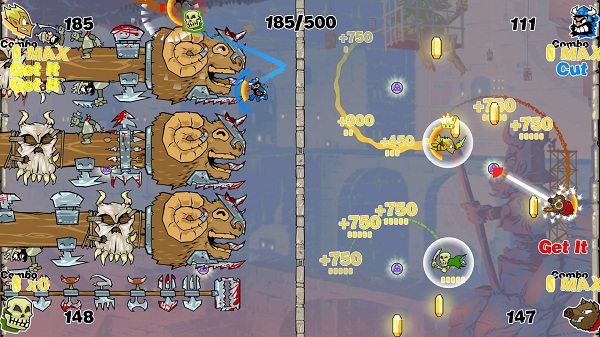 One issue that does arise if you're playing it for fun, you can actually manage to not get enough silver or gold helmets on a play-through, then meaning you have to go back and replay levels again to unlock the other worlds within the game. Which although makes sense from replayability terms but it can be a little tedious if you've already replayed a level so many times.

As well as single player challenges Rotastic features a multiplayer mode that allows you to play against your friends in a variety of modes. They play in a similar fashion to the versus challenges in the single player and have you pitted against up to four players in either Item collect; requiring you to get x number of gems before your friends. Race to the points; which works similarly to a race style game where you need to get to locations before your friends. Or of course good old deathmatch where you just need to do your best to kill your friends. However the multiplayer is only local and doesn't support online, so hopefully your friends don't live half way across the country. That said the multiplayer features work really well and it's great to play with a friend or even the AI bots. 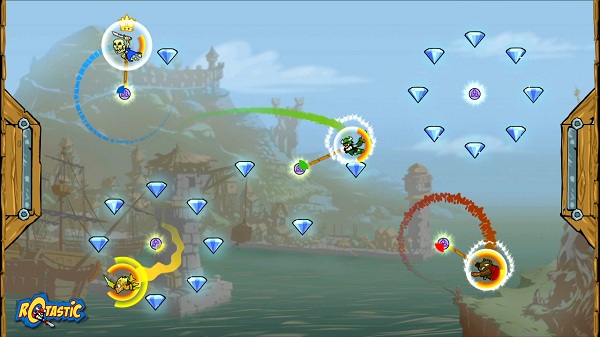 My main gripe with the game would have to be the narrator, introduced before the game even gets to the title screen he comments on the developer and publisher and then when you actually play the game he says an introductory line before the level starts. Which seemed fairly comical and funny at first, telling you to "get everything" or "follow the trails, and please don't forget this is artistic" but when you end up retrying a level a few times he does start to grate a little.

Overall Rotastic is a fun and at times challenging experience which only at times feels a little monotonous, but not enough to stop us from playing. Its biggest downside of course is the lack of online multiplayer as the local multiplayer works really well. With those issues though it is still an enjoyable game, I just wish I could mute the narrator.

Rotastic is available now for Xbox Live Arcade for 800 MSP, and will be available on the Playstation Network and for Windows early 2012. If you want a challenging game and have an eye for physics then you should definitely pick it up.