Rocket Knight is the newest game following the exploits of the heroic Opossum; Sparkster who first graced our television screens back in 1993 on the Sega Megadrive, around 15 years later Tomm Hulett; Associate producer at Konami persisted at reviving Rocket Knight, two years later the long cherished obscure platformer saw a new lease of life when Climax Group were picked to develop the XBLA, PSN and Steam title, that was released May 12th.

Rocket Knight is set 15 years on from the last game, and Sparkster has returned to the kingdom of Zephyrus to find it in a shambles, the Wolf Army have invaded and the Pig Army are ‘protecting’ the opossum civilians, however not everything is quite right with the ‘heroic’ opossum Axel who seems to be fighting for the good cause. 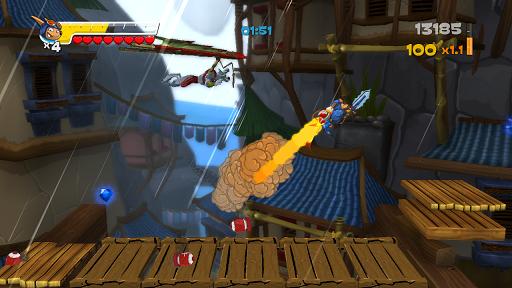 There is the choice of arcade and freeplay mode; arcade gives you the option to play through the game with limited lives and no save points, with certain achievements rewarding players if they complete the game in one sitting, whereas in freeplay mode you can pick and choose levels individually and compete with high scores, or achieve levels on par time.

The first obvious point of the game is it’s cutesy cartoon art style, don’t let this fool you, Rocket Knight isn’t just aimed at kids; it’s a complex strategic platformer that has you questioning the best strategy for levels, it’s also far too frustrating at times for a kid to muster the patience to crack puzzles in order to proceed. In fact the art style is a nice addition to the game, letting it stand out from most platformers while keeping the feel of the 16-bit original.

Sparkster has a wide range of attacks, including simply using his sword, using his jetpack, he can perform a simple rocket burst, burst shot, burst assist, burst vortex, rail spin and burst drill. Using the sword is extremely fluid and responsive, and any attack with the jetpack wears down your auto-filling burst power, which works as a good constraint of the game, as well as this the rocket will only travel a certain distance so it is up to your own skill to master the best positions to rocket off of to bounce off walls, and like the crazy little opossum that you are, hanging around on rails with your tail is still a key feature. 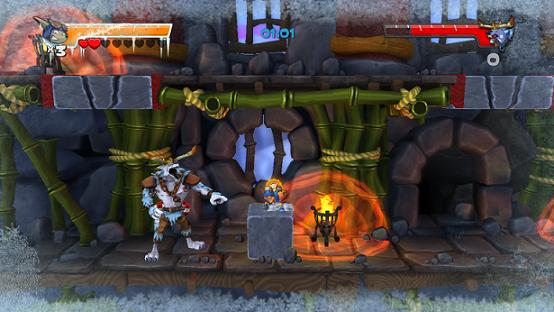 Rocket Knight incorporates both platform side scrolling, and aerial side scrolling in shmup style gameplay, that are equally distributed throughout the 4 different worlds, at the end of each world is a boss, that in some instances can be quite tricky such as the Forest Shredder, or particularly easy once you’ve learnt the pattern like the Wolf King. The levels also evolve smoothly in difficultly, eventually assimilating puzzle-like elements into levels, requiring you to flip switches to progress further, the highlight of the game was the Wolf Fortress level that plays cleverly like the Snowblind mission in Battlefield: Bad Company 2, where you must stay around heated torches in order for your jetpack to refuel itself, as the cold air doesn’t allow it to function properly.

Rocket Knight is a solid platformer, and although the title only has 14 levels across 4 different worlds, it has 3 different difficulties to play, as well as personal achievements such as collecting everything in all levels, and alongside the the high score and speed run leaderboards it is lengthened with playability, while starting out easy, Rocket Knight gets progressively harder, it’s worth checking out whether you’ve played the original series or not. For platformer fans that want a new challenge, look no further than Rocket Knight.

Rocket Knight is available now on XBLA and PSN for 1200 points and £9.99 respectively, as of yet Rocket Knight has not been released on Steam in the UK.