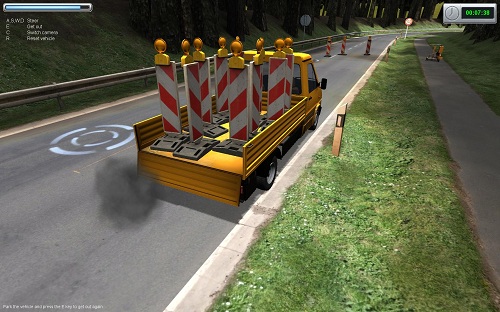 Road construction workers are not exactly a select group of people that everyday drivers aspire to; in fact they usually cause more distress than anything else. However the humble road construction worker is now the spotlight of a new simulator straight from Excalibur Publishing; the saviour to those that just can't put simulators down.

Within a few minutes you will get to grips with the usual pastimes of a road worker; marking your work area with ever-trusty cones, drilling through asphalt with the pneumatic drill, digging channels for new roads with the trusty bucket digger, when you create a new road you'll even get to lay the asphalt. However you'll find that you will get the most use out of the Steam Roller and the Asphalt Planer that appear to be the most useful tools for the men of the road.

For the serious simulation-fan in us all, there is a fantastic setting on the digger, which you can change from 8 to 64, basically this means that when digging new sections of road up, you can choose to go all out and dig up 64 pieces of land, or be a bit of a wuss, and only dig up 8. This is a great option to the game when you consider that some folk may love diggers, but others may just want to play for the thrill of painting lines on the road. The vehicles themselves are what you would expect of a simulator; the Steam Roller chugs along at its own pace, and the game prides itself on the details, it would have been absolutely fantastic if the dirt physics of Digger Simulator 2011 were present! 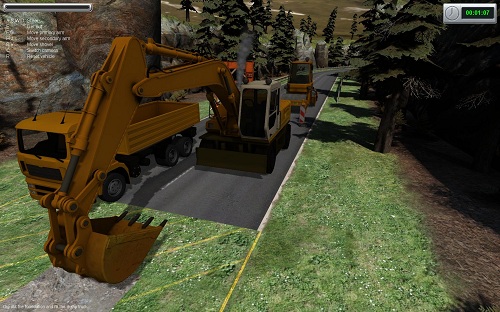 With 10 missions Road Construction Simulator is not short by most standards, and has a fair amount more missions than most simulators, however the main fault with Road Construction is the missions are very repetitive. Granted, this is a very likely chance in the fast-paced world of road construction, but half of the missions take place on the same stretch of road. It's not until the final four missions that you actually feel like you are a road worker as you place down your cones on your empty expanse of motorway as cars buzz past on the other side of the road. Some variation in your surroundings would have been good, but if construction workers got to pick and choose their jobs, I imagine they'd all be on a nice hot beach.

The motorway missions are fantastic, and there’s nothing like chugging along on your steam roller as cars drive past, doing your thing as a road crewman, watching the world go by, which is why it is a shame that you have to work through six country road missions before you'll even see another human driving past. However, these missions make the game what you have been waiting for, all they are otherwise missing is the occasional honk of a horn as people drive by, oh and the obligatory litter thrown at you. But as soon as you hit them you will feel like a fully fledged roads-men.

There are small issues with Road Construction Simulator, like the settings menu, which can only be opened from the start screen, and never during missions, not that it matters because you are unable to change any settings pertaining to graphics or controls, all they allow you to change is audio settings. So you are unable to map your own keys, change the mouse sensitivity or make the game perform better on a low end PC, this is really something that should be available to the player. 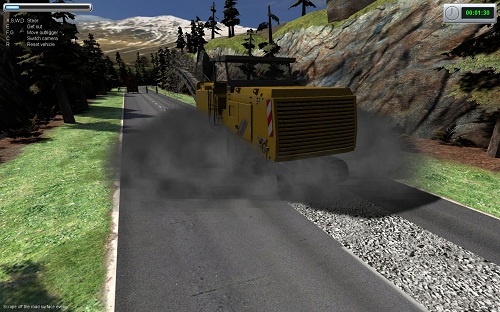 Road Construction Simulator is a game that could have been fantastic in the world of simulators but just falls too far off the mark, whilst it is still an enjoyable game its repetitiveness and incapability to keep up with the vast improvements that simulators have took in the past couple of years it will remain a niche of a niche.

Road Construction Simulator is available now for Windows and has an SRP of £24.99.