It’s Earth’s last stand against the inhospitable depths of space; the titans are taking over, it’s up to you and your rag-tag army to save the last of humanity from the titans as you halt their takeover on Earth, Mars, Saturn and ultimately Titan. Will you step up to the plate in this challenging, engaging and genuinely fun addition to the tower defence sub-genre? 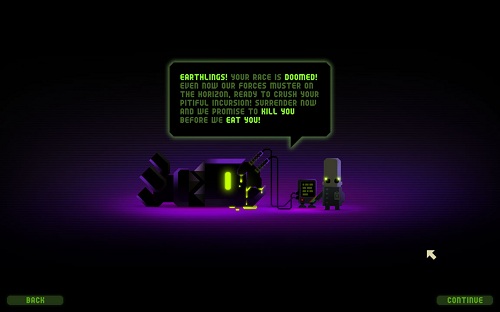 Revenge of the Titans is your typical tower defence, less linear-pre-determined-paths like Plants vs. Zombies or PixelJunk Monsters, and more hectic and nerve-wracking like Desktop Tower Defence giving the player an extremely open base to defend with towers that have very little field of view, Revenge of the Titans is all in the careful placement of your turrets, trial and error, and most importantly; researching the correct upgrades.

Before each level you will be taken to your research lab where you have over 30 technologies to research that will allow you to unlock over 30 buildings ranging from new turrets, explosives, and assists to barricades, droid factories and rockets, pick the wrong subjects and you’ll find yourself in at the deep end as the game progresses. However, much like life, it all comes down to how many crystals you have in your pockets.

Crystal refineries are the name of the game and your main source of income; if you discount random aid drops, killing particularly nasty enemies, and the occasional achievement. On every map you play there will be a random amount of unrefined crystal deposits. Setting up a refinery will eat away at the crystals and put dollars in your pocket for those well-deserved turrets; that definitely don’t come cheap! 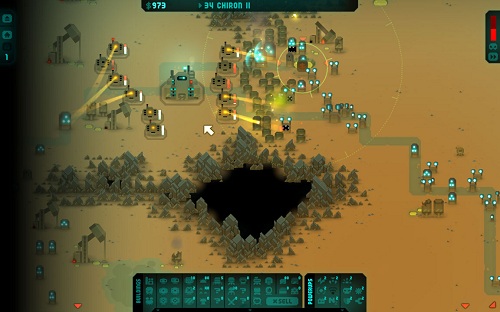 The most endearing part of Revenge of the Titans is the simplicity in its art design; whilst it doesn’t just forgo graphics for gameplay, it keeps everything uncomplicated, pixellated, and beautiful science fiction.

Revenge of the Titans does make use of craze of achievements, but with good use, with certain achievements rewarding you money for your hard-earned purchases in your next level, they range from finishing a level without having any turrets or your base scratched, to blowing up a specific amount of enemies with explosives; they’re fun, pointless and completely addictive; just try and ace the mission on Titan!

Now the achievements added are not a feeble attempt at adding replay value to the game; Puppygames know their audience, and they’ve tailored the after game experience exactly for that; after saving Earth you will be rewarded with Survival Mode, a fantastic sandbox styled Revenge of the Titans, however you’ll play the Earth map with the last technology that you unlocked, unfortunately your amassed knowledge will not simply carry over. 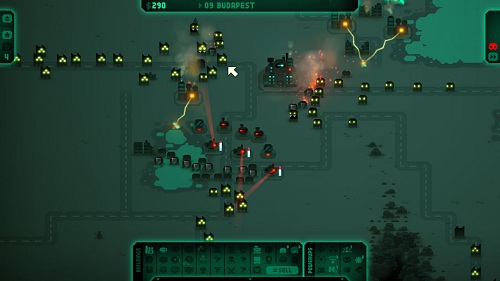 The game does progressively get more difficult, and you’ll know when you’ve made the wrong research choice when you hit a bit of a brick wall, however all is not lost; in Revenge of the Titans you have the ability to scale the difficulty when you begin to feel a little hot under the collar. You won’t receive a gold medal at the end of all your hard work, however you will get an easier level generated, perfect to get you over that step that was a little too steep.

Along the way you’ll kick some xeno ass, beginning with your standard slow-moving grunts, some lightning fast spiders, right up to your gigantic Megatitans, ready to rip into your base like an overly ripe banana. Best of all, the variety of the enemies keeps levels fresh, so it won’t feel like every level contains the same rehashed waves over and over again.

The great thing about Revenge of the Titans is that the range of weapons and buildings allows you to spice your game up, perhaps you’re a defensive player, so you’ll surround your base with barricades, or maybe you’re a bit greedy, so you’ll fill the map with refineries, and pick the enemies off with more cheap mobiles forms of destruction such as mines. Then again, maybe you just want to play the game properly, equal amount of defence, sensible resource management and turret offensive. Personally I get a bit greedy, that and the mines have spoilt me, at $25 a pop, you can knock out pretty much anything with them, even a Megatitan! 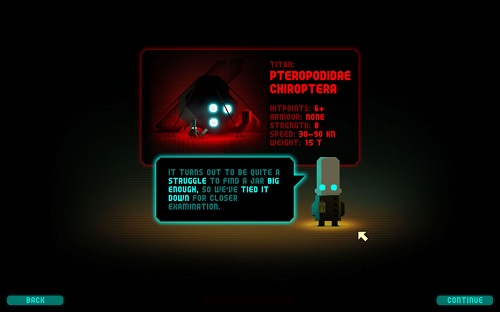 It’s not difficult to fall in love with a game like Revenge of the Titans, it’s simple graphics, engaging gameplay, and challenging levels make an almost perfect game, and with the added replaybility included with endless and survival modes, you will never want the onslaught of mindless aliens to end.

Revenge of the Titans is available now in all good retailers and comes with a bonus poster, soundtrack, desktop wallpapers, and Steam code for the game all for the SRP of £19.99, alternatively you can own a souless digital download of the game which you can buy via the PuppyGames website, or off Steam.