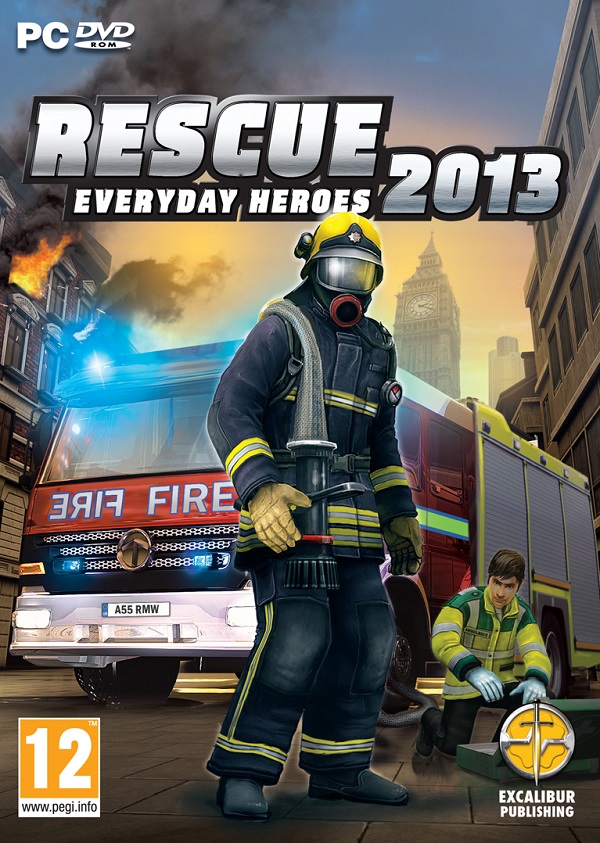 Rescue 2013 is a new top-down emergency services management simulator; think theme hospital meets Age of Empires. It strikes an alarming similarity to the Emergency series, however one very important difference is in Rescue you play the part of an ‘Everyday Hero’ so you won’t be taking part in any ridiculously staged scenarios, in Rescue you're put in charge of a small no frills fire station, as you succeed in emergency missions you'll climb the ranks, and unlock new vehicles, units and rooms to increase your ability to tackle more challenging scenarios such as full house fires and large road accidents.

Rescue 2013 has two very distinct phases where you will dwell management and strategy; at the station in between emergencies you can place items for your crew, set them about tasks and purchase new vehicles and hire more men in this management mode, -and we mean men, you won’t find any ladies in this game- then there are missions that you will be called out to, these must be tackled within a time limit as you command your vehicles and personnel in real time, the two phases are very far removed from one-another, but thanks to the 'alert' button you can enjoy whichever of the two takes your fancy as often as you like, in choosing to always be on call for a mission coming up, or sitting back and managing your force without having to be on edge for emergencies. 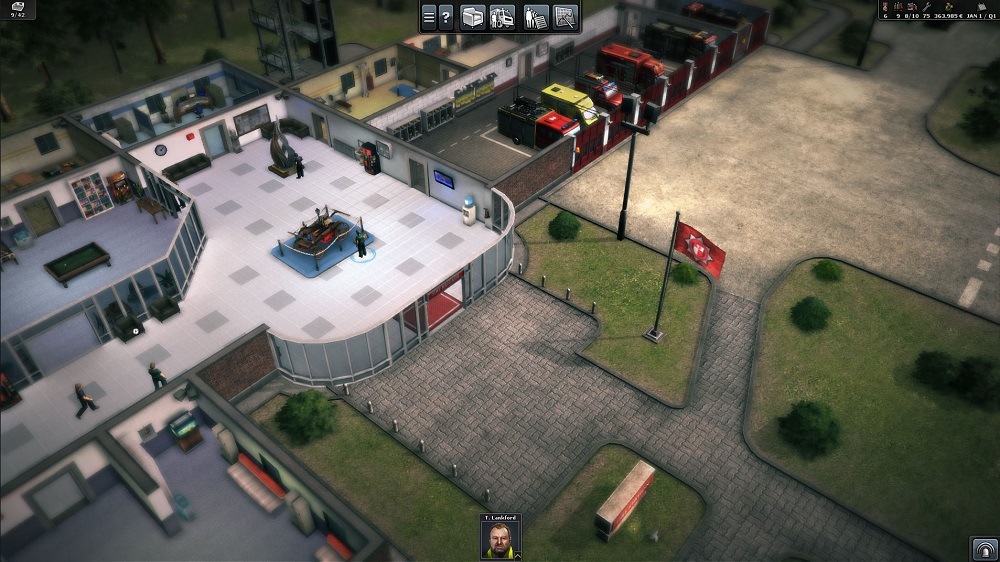 One downside for management fans out there, is you won't find any time compression whilst at the station, and personnel won’t improve their skills at the drop of a hat, so sending one of your firemen to the gym to work on their fitness will take a very, very long time. The decision to not include time compression does seem a little odd, so if you aren't very patient you'll probably want to spend more time on ‘alert’ to fill in those slow periods.

That said, you won’t be left watching your men do nothing, whilst you are waiting around at the station for something to take place you may bear witness to a few random events, these can range from anything as trifling as helping out a games developer with the fire fighting simulation they are making, or giving money to charity, events will have their advantages and disadvantages, and it’s important to pay attention to the outcome of each choice as you may end up with fatigued men, however most are positive boosts to your staff or the station. The random events are a nice touch to add a little more to the management side of the game, but you’ve never really got to make too much of a choice, as there always seems to be a clear good or bad answer.

The management itself is pretty basic, you won't need to hire a cleaner to keep your station clean, nor will you need to ensure that your firemen keep a tight schedule of meals and rest, all the management side of the game really allows you to do is increase the skills of your men, and maintain your vehicles which is a little disappointing. However it’s not all for nothing, because you can see the results of your hard work, and when all your men are running around to put out fires it does make you a little proud, but unfortunately it just doesn’t make up for how long it took to get to that stage, thankfully the real time missions are exponentially more fun!

In the campaign mode your station is a far removed from the rest of civilisation, only because the mission offerings are far greater, but it does mean that you won't get to watch as your vehicles leave their bays and traverse to the scene of the emergency, instead you chose which vehicles and units you will send out via the dispatch screen, on this screen you are informed as to your current emergency which may be the size of the fire or the amount injured, and are advised on a recommended minimum amount of units to send out, so you won't be expected to make a judgement call, that's what freeplay mode is all about, but we’ll get to that in a bit. 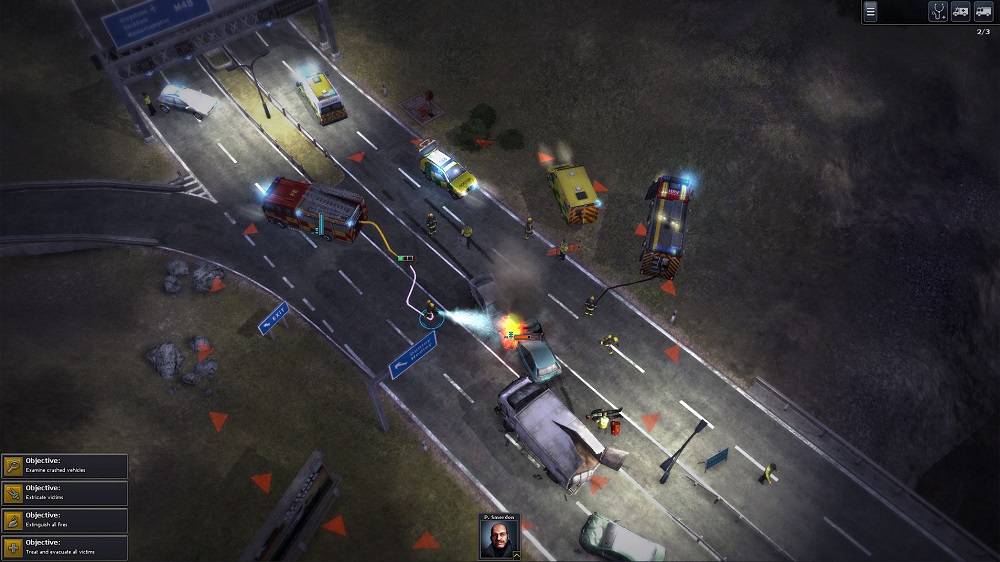 In Rescue 2013 you won’t simply be commanding firemen, after-all, firemen can’t do everything, and so when the time comes your fire station will become home not only to a group of burly fire-fighters, but a bunch of paramedics too, these add a good deal of variety to the game and the two complement each other well, a blazing fire can have casualties, so rather than leaving unconscious patients at the scene of a fire, you can care for them and ship them off to the nearest hospital. The two services mix together nicely, although tending to patients is considerably more long winded and fiddly compared to the needs of a fire; each patient must be assessed and then treated before being taken to hospital in order of their priority, bearing in mind that a patients condition, just like a fire will increase over time.

So you've sent your personnel with a fully equipped fire engine out to the scene? Inside of a mission, Rescue 2013 turns into a real time strategy of sorts, when your vehicle arrives from the station you'll have a tight time limit to race to the scene, disembark your crew and set them about their job. This isn't quite as simple as it sounds, after all, this is a simulation game, when your crew are out of their vehicle you'll need to get them properly equipped and tell them what to do. Unfortunately it's a little more awkward than it needs to be, and in order to get an attack hose on a fire you'll need to take your fireman out of the engine, make him take out a coupler, attach it to the water source, lay it down on the ground, go back to the engine, take out the attack hose, attach it to the coupler and then you may use it, all of the steps make sense, but in such a tense situation its not ideal to have to fiddle around with each of your firemen in this way.

Instructing your men is undoubtedly the most strategic part of the game, you'll often need to size up each emergency, and more importantly in the case of a fire; just how much water you're going to require, obviously a fire extinguisher is a capable tool for a very small scale fire, but when your fire is the entire floor of a building, or larger yet, a plane crash you're going to have to find a hydrant connection to connect your hose coupler to, or you may find you deplete the water supply of your engine far too quickly, leaving dead in the water, this is by no means an oversight from the developers, and if you do find yourself in such a situation there is a way out.

If you did overestimate the scale of a fire, or perhaps there were a few more casualties at the scene than you could handle, you always have the ability to call in extra vehicles to help out, these come at a cost, but when lives are concerned money means nothing right? Whether it’s my incapability to handle an accident, or perhaps the game being far too tight in recommending the amount of vehicles and staff you call out, the feature is a necessity when you simply can't complete a certain mission, which does become disheartening after the fifth attempt at a mission proves that you will need some extra help, I’m not going to lie, some of the missions in the game are pretty challenging.

But that's just the main campaign, we've not even mentioned Freeplay mode, which is not simply a sandbox version of the standard game! In fact, Freeplay is what I originally expected of Rescue 2013; you are placed in the middle of a small town, set up with a modest Fire Station and Hospital you'll need to dispatch units to emergencies as they take place, basically freeplay is an endless mission mode that will only end if you fail to bring three emergencies under control, contrary to management mode in the main game, Freeplay comes with time compression, and if you're just here to put out fires and resuscitate helpless victims it's where you're going to want to spend a lot of your time.

The missions inside of the main campaign and freeplay can be relentlessly challenging, and many you'll find yourself finishing very close to their time limit, however from time to time you may come across a few issues completely out of your control that result in a failed mission. Thankfully the developers at Fragment decided to give your vehicles no collision when driving about, much like a real time strategy this stops horrendous bottle necking, and worse blocking other vehicles in confined spaces, however in the busy roads and spaghetti junctions not all is perfect, and pathfinding can sometimes work against you, and after a minute of waiting for my fire engine to turn up at the location I requested I found it turning around in circles unsure of how to access the point that I had marked, these nasty issues weasel their way into the game, and whilst they won't be blocking your fun left, right and centre they aren't well-received when you're fighting against the clock. 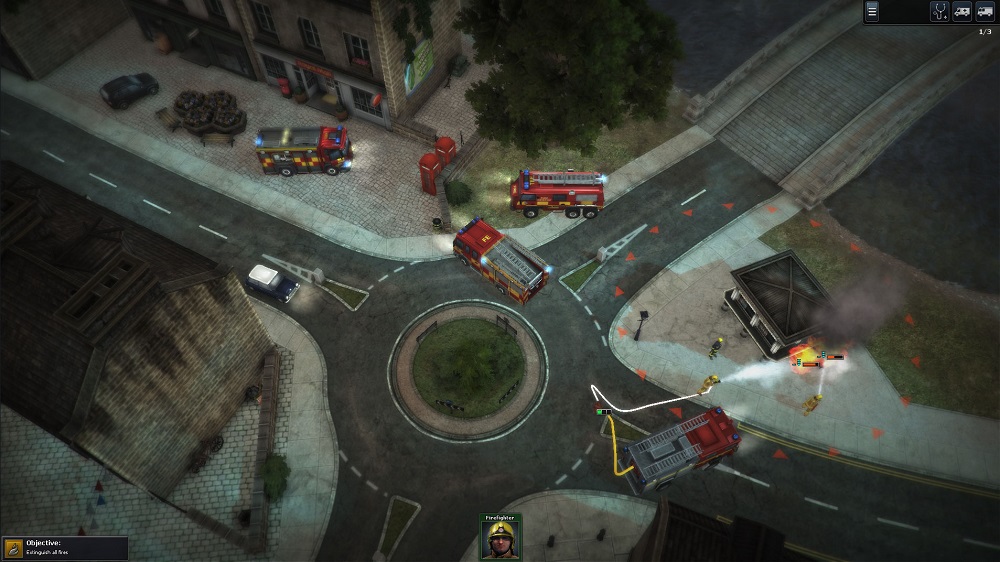 However one of the key features of Excalibur Publishing's release of Rescue 2013 is in its slight modifications, despite the game seeing a native release in Germany a few months ago, the publishers wanted to give its British audiences a bit of familiarity, so the liveries of your emergency vehicles are the ones you'll be used to seeing out and about, and throughout missions you'll spy traditional British staples, such as Mini's, red telephone boxes, even the odd Police Call Box for those Doctor Who fans out there. Now this isn't to say that the game is only 100% British, if you like you can play the generic German version without the modifications, or if you would prefer to see the Welsh, or French equivalents the game is totally mod friendly, so I think it’s about time we saw some Ambiwlans, go on, someone make them!

Rescue 2013 is an interesting mix of real time strategy and management simulation, although some may find the management aspect lacking somewhat, the missions of the campaign and freeplay mode are made suitably intense thanks to the fires that whilst still controlled, will spread if left too long, if you're looking for an RTS with a difference, and dont mind the prospect of some fiddly commands, Rescue 2013 is most definitely different.

Rescue 2013 is available now on Windows PC for the SRP of £24.99 and can be purchased in all good stores and online retailers.