We know what you are thinking? Trials rip-off, Konami have gone and jumped on the Trials boat hopping to get aboard the island payload with a branded name.

Well you’d be wrong, far from it! In fact, there is no comparison, Red Bull X-Fighters is not deeply rooted in precision skill, if anything, Red Bull x-Fighters is closer to a more simpler time in motocross gaming; Excitebike.

To create a good picture in your mind of what to expect, Red Bull X-Fighters is Excitebike meets Tony Hawk; this is fuelled with a roster of 20 tricks to perform in the game, which to be fair is quite a low number as trick-based games go. The obvious reason for this is that the analogue sticks are not utilised, so each trick is executed via a combination of the triggers, bumpers and the face buttons. 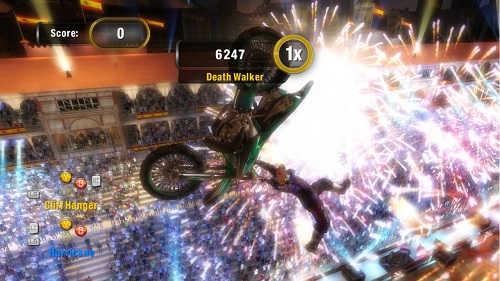 Whilst this sounds as though tricks would be a fantastic walk in the park it makes for extremely difficult hand positions to ensure that you hit a ramp at maximum acceleration with a wheelie for that extra bit of air, sure it doesn’t sound too hard, but now I’ll tell you that you hold A to accelerate.

To make matters worse, whilst there are only 20 tricks in the whole game it is strikingly easy to perform a different trick by mistake because so many use similar button combinations that when pressed a fraction out of sync your biker will perform the trick you did not intend to pull off, yes it's all about the accursed Saran Wrap.

Whilst practically unnecessary, there are a selection of training levels to get you used to the game, however as soon as you know how to accelerate and understand that your bike is controlled on a 2D plane there isn’t really much more required of you to know, however they introduce you to the bronze, silver and gold system present, and are great at getting you used to your bike. 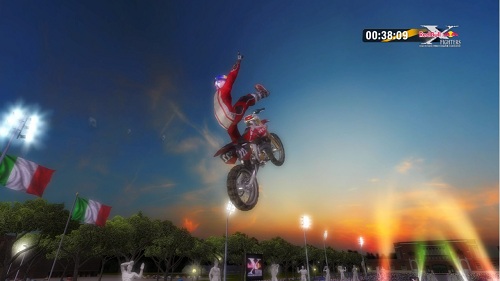 The Red Bull X-Fighters motocross sells to a niche market and is a highly competitive sporting event that is held yearly across the globe. So rather surprisingly you cannot chose to play as your favourite X-Fighter, instead the only customisation is present in the handful of motorbikes that at your disposal. These are unlocked as you progress through the game’s events and each bike has two stats; speed and acceleration — which unfortunately do not give much scope, or variation; there’s never really a want to go back and use an old bike, you are always using the next bike that you unlock.

The game is pretty big, if you want to achieve 100% in it, it is the simple task of getting enough gold medals and fans to unlock the best bike, regretably after that point, almost every challenge will be plain sailing, with a only a few ridiculously difficult time trials added in.

As easy as the game becomes, you will occasionally just miss the Gold, and you can’t help but retry your events multiple times, to obtain your prize. Of course this will only be driven by your willpower and your own obsession, and to be fair, the only way that Red Bull X-Fighters can be compared to Trials is for the addictive nature it can bring out in it's players. 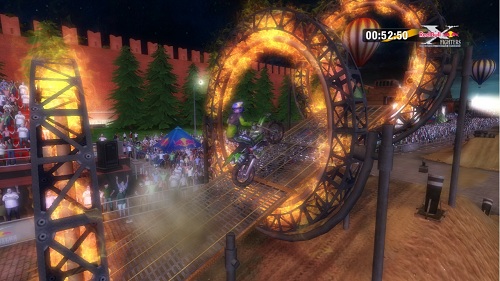 The game is split into three main types of event; Tour Stops, Race Tours and the Red Bull X-Fighters World Tour, each takes place over six locations around the world including; Mexico City, Giza, Moscow, London, Madrid and Rome.

The Tour Stops make up the largest part of the game, and employ the four different varieties of event; Show Off, Performer, Pressure and Time Trial. The Tour Stops are the pick-up-and-play aspect of the game and some events take as little as 20-30 seconds to complete. If you can get past the visual and audio elements that some gamers may find offensively simple, then you’ve got a pretty solid game to keep going back to.

The Race Tours are a race on the full track, these last up to 2 minutes long, and are for the speed junkie who’s not so big on performing tricks, these are simply Excitebike with improved graphics which is great for a bit of nostalgia, however some may find the less than innovative tracks a little too simple.

If you love your tricks then the Red Bull X-Fighters World Tour is the event you were hoping for. Taking place in the same six locations, you are given the whole run of the track to get in as many tricks as possible for the maximum high score. With such fiddly combinations for tricks you’ll find yourself fumbling for them, however much like Tony Hawks or other trick based games, you’ll find that rapid button combinations still manage to work more often than not. 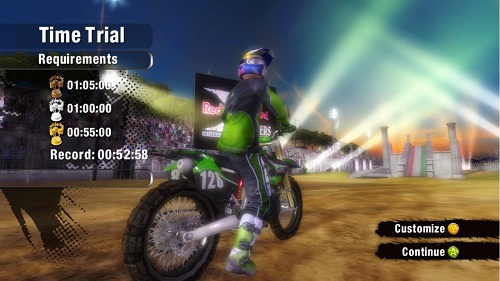 For a bit of fun there is also the option of World Record, these allow you to put your skills to the test performing the Long and High Jump, both require great skill; I could only get silver! It’s just as shame that these are the only sidetracks from the main game.

Whilst the game does not look very polished, and you'll hear the annoying announcer spout the same few phrases throughout your career, Red Bull X-Fighters reminds you how simple, but fun, Excitebike was, and if your biggest competition is yourself, this game is perfect for the obsessive score setters out there.

If you want an enjoyable pick up and play game that mixes Excitebike with Tony Hawks, then Red Bull X-Fighters may just be for you, whilst there are not a wealth of tricks at your disposal, and you’ll often find your fingers in a jumble there is an addictively challenging arcade game here that will keep you entertained for a good while.

Red Bull X-Fighters is available now for Xbox Live Arcade for 800 MS Points, if you're looking for something to keep you entertained for a few days it is a good contender, but fans of the motocross itself, don't expect a faithful game geared towards you.