Realms of Ancient War is a new hack’n’slash action-rpg-cum-dungeon crawler from developers Wizarbox that brings co-op back to the couch in a faraway fantasy world that has been at war since anyone remembers, complete with loot, three very distinctive characters and a quest of greatness, does it hold up to rest of the genre?

Realms of Ancient War contains all of the familiar archetypes you would expect of a fantasy game and in a realm of persistent war you must take up the imperative task of bringing the world to peace with the barbaric Warrior, the powerful Wizard or the mysterious Rogue. Each character comes with a distinctive set of skills, and whilst the Wizard is a clear winner in terms of power and reach, both the Rogue and the Warrior do have their own advantages and strengths nothing beats obliterating wave upon wave of gribblies with a chain of lightning or a well-placed fireball. 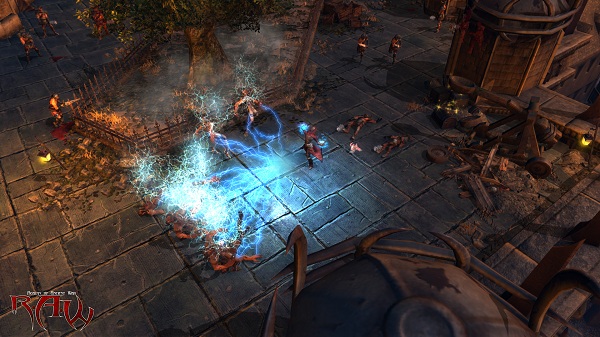 The story is your standard fantasy foray, in a continent split between four kingdoms; the Dwarves, the Elves, the Humans and the North have been at war with each other for far too long. When the collective vows a stay of peace with a truce, a mysterious circumstance takes place at the meeting that throws all of the kingdoms into a state of ruins, left to be preyed on by raiders and looters as their kings lay hopeless. Like any true tale, Realm of Ancient War is full of double crosses and general mistrust on the backdrop of a fierce environment that will pit you against many a human, dwarf, elf, demon, troll and more as you fight to help the good fight.

The combat in Realms of Ancient War is very standard, and a lot of button mashing ensues when you give in to using a character’s default attack, this will of course ward a few gamers off. However you aren't simply limited to one attack, and your character can have two pages of skills within hands reach on the two quick shortcut menus, and cool downs guarantee that a variety of attacks are used, although in the most frantic of fights you really cannot help but fall into the same clicking syndrome of most similar games.

Now the best feature of the game is its inclusion of local drop in/drop out co-op, now unfortunately it does stop at local, so you won't be able to fight alongside your brethren online, but you can invite them round for some fantastic couch co-op! Unfortunately despite there being three characters in the game, Realms only supports two player co-op, which is a great shame when it comes to having your partner pick which character to choose, however, playing just in co-op the game is a little easy, and not totally balanced for two players so we understand why three players are not an option. 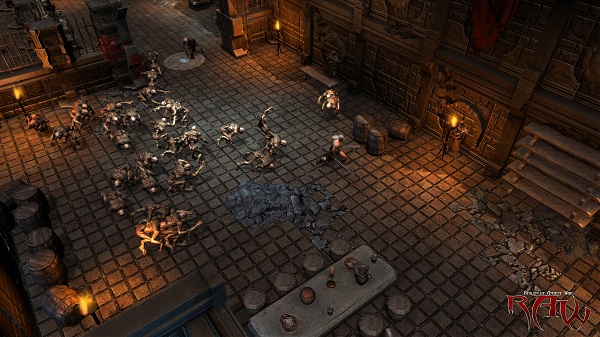 The co-operative combinations possible are fantastic, and after many a mission with Warrior, Rogue or Wizard, there is not a duo quite so complementary as the Warrior and Wizard when using the combined strength of the Warrior’s Deadly Grab that will pull a number of nearby enemies towards him, and the Wizards’ chained Lightning Bolts; you’ll have a fantastic team on your hands.

Realms of Ancient War does boast a unbelievable amount of enemies on screen at a time, which does make for a few frantic fights, however with a selection of powerful area of effect spells and attacks at your disposal, such a crescendo in activity on screen unfortunately does not come without its problems, and very occasionally performance issues do occur.

So you get to attack a large amount of a wide variety of enemies, big whoop right? A neat trick embedded into combat is the ability to take over the more frightening of enemies with Incarnation. Taught to you by the King of the North, Incarnation allows you to switch the scales of battle by taking control of 12-foot high trolls, beholders, giant spiders -pretty much anything that you need to look up at- and turn them against their allies for some very satisfying damage control. 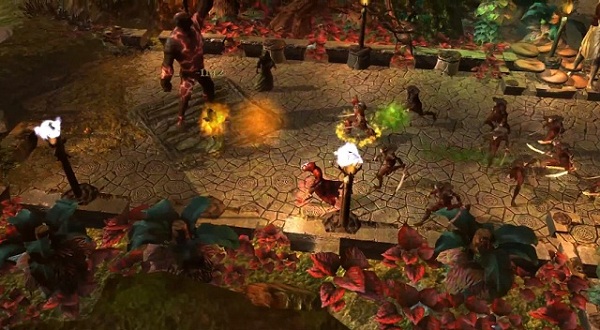 Loot is always king in the dungeon crawler, however in Realms of Ancient War there’s something missing, you never really feel fulfilled and end up falling into the rut of picking up everything and heading to the nearest merchant to sell your wares, it may be because there is a distinct lack of grinding quests. But much like other dungeon crawlers the best equipment is found in the field, and merchants are practically useless, so you'll find yourself using them simply to sell items, rather than buy anything of any worth.

If you do happen to fall in Realms of Ancient War, it’s not game over just yet, it contains a checkpoint system similar to Sacred, wherein if your character falls; or both of your characters in co-op, they will be respawned at the last activated checkpoint and a Soulstone will be taken in return. Throughout the game you’ll pick up the Soulstones and they are never really in high demand making it a little on the easy side, however that means no grinding, which still produces an enjoyable experience. Now I don’t know about you, but the less I have to grind in a game the more compelling the game right?

The skill trees are fairly standard, with three tiers that unlock alongside your characters level, each skill has three ranks, and some extremely powerful attacks can be found amongst a string of passive and supportive abilities. However it almost feels as though the gusto was lost when designing each characters’ final tier of skills, and you are not rewarded with mind-blowing skills after getting fully tangled in the game, just a few practically useless supports. 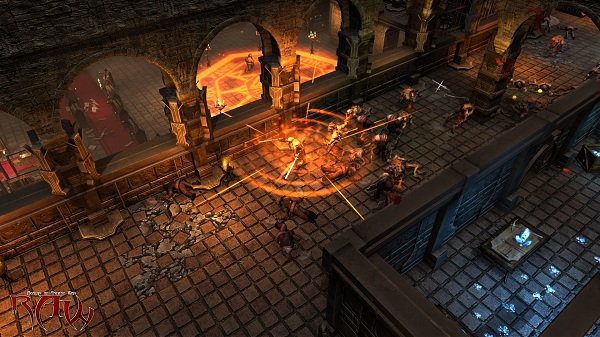 Unlike the towering playtime of big dungeon crawler hack’n’slash and action-rpgs like Diablo, or Sacred 2, Realms of Ancient War is not an expansive open world full of side quests, multiple paths and many, many hours spent. Instead RAW is a bit more of a linear affair cut up into many bite size levels, so you won’t find yourself stuck in a dungeon for hours upon end, and with only a maximum of 3 side quests per level that are entirely optional, it poses as the perfect isometric experience for the modern gamer that has no time on their hands!

Co-op, loot, characters and skills aside Realms of Ancient War does boil down to one fact, there is not much that makes it differ from your standard action rpg/dungeon crawling experience which is a downfall of its kind, the story is engaging but not overly complex, the skill sets are about standard, the combat is average and for those that like to play in an open world for hours you will not find the game that you are looking for. Unfortunately it’s one of those games that you stumble upon, enjoy the ride but find little longevity after one playthrough.

With an exceedingly entertaining co-op experience, a comprehensive story line and hours of dungeon crawling, Realms of Ancient War is a fantastic addition to the sub-genre, whilst singularly it is not the most thrilling of games, get your mate round and begin on an epic quest to save the dying realm.

Realms of Ancient War is available now on Xbox Live Arcade, PC and Playstation Network for the RRP of 1200 MS Points, £11.99 and £12.99 respectively.