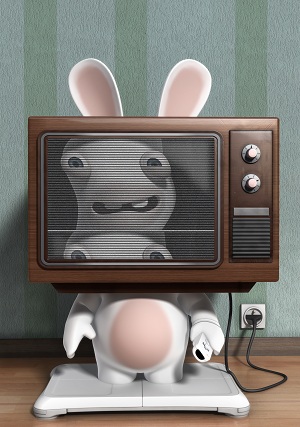 It’s annoying sometimes how much everyone loves Ubisoft’s accidental hit the Rabbids, but you just can’t help but find a childish innocence in them found nowhere else. Well it’s about to get easier to find with Ubisoft's announcement of a new licensing agreement with Nickelodeon to bring a television series based on their world-renowned Rabbids to audiences around the world.

Beginning in 2013 Nickelodeon will broadcast the 78 seven-minute full-CG snippets into 26 half-hour episodes across its channels worldwide; excluding France.

Created back in 2006 the Rabbids viral videos attracted more than 41 million fans on Youtube. The television show will be created by Ubisoft Motion Pictures with Ubisoft’s French studios to create a series just as unexpected and quirky as the Rabbids games that fans know and love.

We absolutely loved the Viva Pinata tv show that lasted a few episodes so we'll be interested to see where Ubisoft takes the Rabbids.