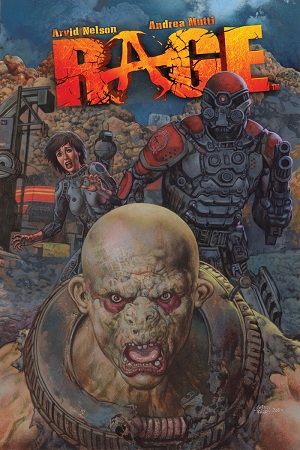 Bethesda have announced that they will be partnering up with the dark and brooding Dark Horse Comics to release a three-issue comic series based on id Software’s upcoming game RAGE.

Written by Arvid Nelsion; the acclaimed creator of Rex Mundi, and lesser known writer of the Killer7 run of comics, and penciled by Andrea Mutti. RAGE will also feature fabulous cover art by the brilliant Glenn Fabry, known best for his covers of Preacher and Hellblazer.

The series will be set prior to the events in the game, and are more of an extension to the RAGE universe, with numerous insights into the game’s storyline. The first of three will be avaible in North America and the UK on June 22nd.

Developed with direct participation of RAGE’s creative director Tim Willits it isn't just a comic created with no cohesion to the game and takes a new twist on the average post-apocalyptic near future as a woman discovers that the survival of humankind doesn’t necessarily mean the survival of humanity. After the Earth is devastated by a collision with an asteroid, a tiny fraction of the population manage to survive in life-sustaining Arks buried deep below its surface. Those who survive emerge to find a wasteland controlled by a global military dictatorship called the Authority. But a rescued scientist learns that the Authority has lied to her and the other survivors about how this new world came to be.

RAGE is the latest game from id Software the fantastic developers of Doom, Quake and Wolfenstein, and is due for release September 16th on Xbox 360, Playstation 3 and Windows.