Puzzle Agent is the first game to be pushed out of the newly created Telltale pilot program; testing the ground for new ideas. So instead of your well-known protagonists such as Guybrush Threepwood, Sam, Gromit or Strongbad, players assume the control of the little known Nelson Tethers; the FBI’s best and only Puzzle Agent.

As the story goes the Whitehouse’s eraser factory has stopped producing erasers, and it is matter of government importance to get them back up and running, the FBI have had their finest on the case, however when they try and find out what is going on all they get is puzzles in return. All heads turn to the FBI’s Puzzle Department, a little known subdivision that look specifically at puzzles, so it comes as a surprise to Nelson Tethers when his puzzling expertise are required all of a sudden. 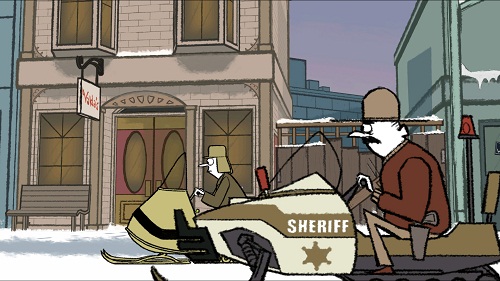 Everyone will be comparing Puzzle Agent to Professor Layton, and rightfully so, because Professor Layton and young Luke have been left behind in the dust. Although the puzzles may not be as tough or logical, the sheer bizarreness of Puzzle Agent, and familiar loveable setting of a Mid-Western American town makes the game an absolute hit. Not to mention a hint system makes brilliant sense!

A very misleading part of Puzzle Agent is that the puzzles themselves are actually a lot more complex than they may look, granted some are extremely simple, some are just darn head-scratching, and there are a few that need to be explained slightly better, however like any good puzzle title, Puzzle Agent has a very well thought out hint system.

Those of you may remember the hint tokens that you would find in Professor Layton; small coins that had practically no bearing on the game or story itself, however turning to Puzzle Agent, hint tokens are pieces of chewed up gum. Like most people Nelson has certain things that help him concentrate, most effective of all is gum, however the town of Scoggins are all out at the moment, however luckily enough Scoggins do not seem to have chewing gum fines, so Nelson has no choice but to find used gum throughout the town in order to increase the number of hints that can be used during puzzles. 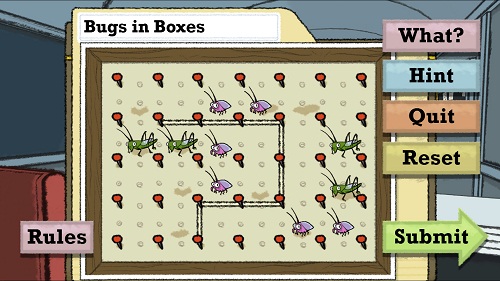 You explore the town of Scoggins with a sort of radar like mechanic that appears with a click on the screen which displays; puzzles on inanimate objects, people to talk to, doors you can use, as well as the gum that you will find absolutely everywhere.

The best part about Puzzle Agent is the games’ consistency to the governmental theme, a filing system is present to display all of the puzzles that you have encountered, each guess to a puzzle costs Taxpayer’s money, which is totalled on your menu screen, you are ranked as an agent after each successful puzzle and Nelson uses his trusty ruled pad of paper to ask questions to the locals. 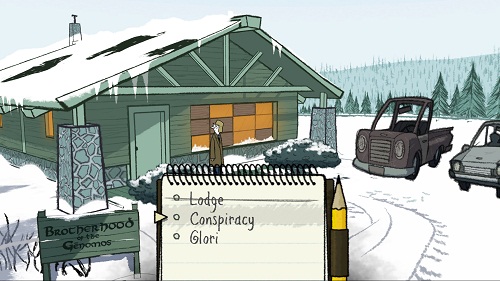 Without a doubt the inhabitants of Scoggins are fantastic, and you do feel that the town itself is very Lynchian; the seemingly normal town with a shady underbelly, and the mid-western setting cannot help but remind you of the Minnesota setting of Fargo, and the Nordic sing-song accents of Scoggins’ residents fills you with charm. This is simply added to by the raw art style that this Mid-Western thriller that is full to the brim with puzzles ever more endearing, and let’s not forget the hidden people as well who just add that oddly sinister Lynch twist to the story.

Telltale have gone and proved that a brand new IP such as Puzzle Agent, based on a little known doodle can make the most extraordinary and compelling game in the Telltale engine, and they have definitely struck gold with their pilot program, and I’m sure we’ll be seeing some more of Nelson Tethers!

Puzzle Agent is available to buy now for Windows and Mac on Telltale's website for $9.95