Pucca is a brand well known amongst fans of the East and lovers of anything cute with an Asian twist, she has been around since early in 2000 and has since evolved into different lines of apparel, TV shows and even a theme park in South Korea, well now she’s jumping over to the Nintendo Wii and WiiWare and you get to take control of her in Pucca’s Race for Kisses.

With a release on Valentine’s day you will expect love to be a major theme of the game, and it doesn’t disappoint, Pucca is on a mission to win Garu’s heart and she won’t stop at anything that gets in her way. If this means she has to freeze time to avoid enemies or obstacles so be it, however she can also utilise katanas, pens, fans or even towels in specific levels. Each item having its own special ability to allow you to progress through the game. Use a pen to draw an escape route, or a fan to remove clouds in the level, if it helps you get to your love then it’s the best thing to do. Should you succeed in grabbing Garu at the end of each level Pucca will show her affection with a very wild kiss ending each level with something to remember.

As well as the main gameplay found in the Story Mode you also face a whole barrage of mini-games to play as well. You will be faced with mini-games at the end of each level in the main story, giving you a continuation on the gameplay that leads to a little more brain scratching than the rest of the game. You may be faced with a maze you must escape, or have to put a puzzle back together. The fun doesn’t stop there though as the game also features a Multiplayer and a Score Attack, the latter allowing you to repeat the levels you may have not done so well on in order to beat your previous score. Multiplayer then puts you up against a friend, one takes on Garu, another Pucca, and you must either chase or run away to your heart’s content to try and win while avoiding any obstacles in your way. Which is a nice twist as instead of always being the chaser (as you would in the Story Mode) you can become the chasee. 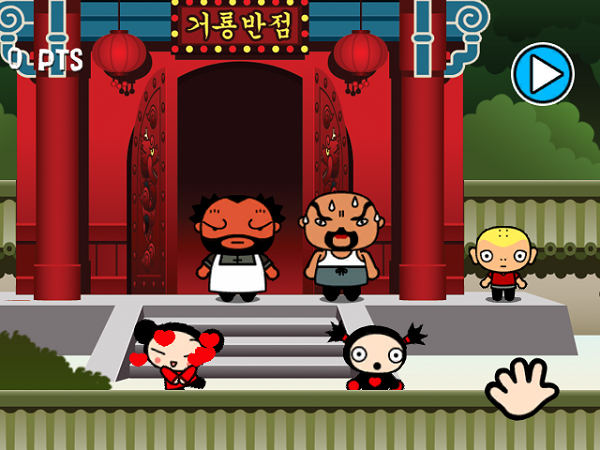 Pucca’s Race for Kisses will be available on Valentine’s day otherwise known as the 14th of February 2011 and is exclusive to the Nintendo Wii for a srp of £29.99. Also Pucca’s Kisses will be available on WiiWare on the 4th of February with a price of 1000 Nintendo Points, however it has been edited down and features about half the levels that the retail release includes.