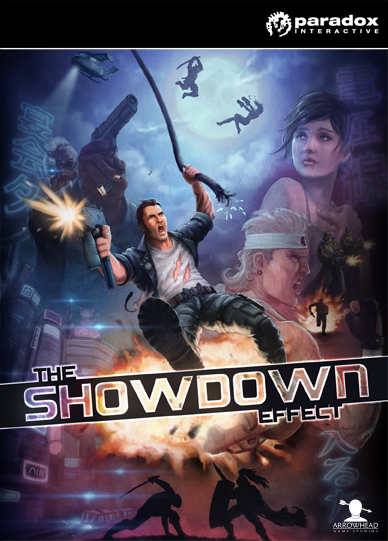 One of my favourite announcements from GDC was Arrowhead Games' The Showdown Effect, after watching the trailer I was captivated and knew that I had to play the game for myself. Luckily I managed to have a play recently and even in a pre-alpha stage it was just as amazing as I expected it to be.

Arrowhead Games are of course best known for their hugely successful Magicka series, an isometric, alchemy based gib-em-up that has been so successful, they've created four map packs, two story expansions and 6 items packs all based around Magicka. Even after releasing only one title with a large array of expansions you can very quickly see that they know what they're doing and The Showdown Effect helps convey this even more.

The Showdown Effect is a 2.5D multiplayer-action packed-insane-deathmatch style game which focuses heavily on super-fast gameplay. Currently the game is being developed to work with 8 players, however if they can manage to fit in more then they'll up the limit.

In order to create a believable action hero they need a lot of variation between characters, be it the retired cop, medieval knight or maybe even a Ninja, who knows what Arrowhead have up their sleeves. All we know is there will be three male and three female characters for you to play as when the game launches. However there was promise of more characters to be put into the game post launch.

est feature about the characters is that you won't be picking them based on their stats or values. The only differences between the characters are purely for cosmetic value, and your reason for choosing them will ultimately be determined by their cool factor; who you think looks best. As long as Arrowhead distributes the cool evenly you should have a nice array of characters each time you play against people. When choosing your character you have the choice to change your weapon and armour load-outs. However you will want to be careful when selecting them as the heavier the items you pick the more impact it has upon your character's weight, making them more sluggish to move around.

The map we were shown was the same as the one in the videos and screenshots "Neo-Tokyo" they're currently working on a medieval map which is of course where the knight hails from, but the rest are currently unknown but we can't wait to see what great action scenes they create. Will there be a space map, a jungle or a fighting dojo, only time will tell!

As you may presume from watching the trailer it's all about super awesome moves and scoring points; the points may not be that apparent but cool moves definitely are. Arrowhead Games are working on a great movement system, creating a seamless and fluid animation system to allow for the best look and control system to suit the game. You can easily dodge attacks with a click of the right button and you can aim your weapons with the mouse. All-round the controls feel like they could very easily be mapped to a gamepad and even in very early stages felt quite solid and you could easily tell what the finished article would be like. 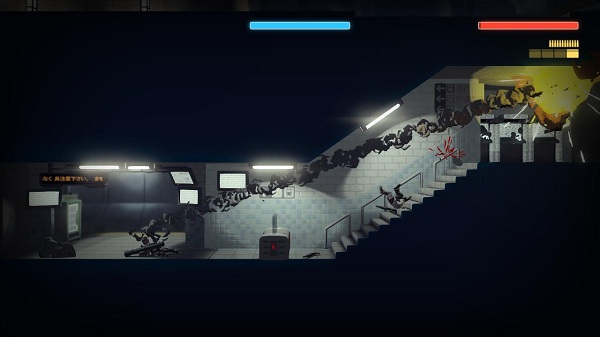 One of the biggest features of The Showdown Effect is the emphasis on in-your-face visual effects, similar in style to what you may have seen in Is Tropical's music video for their song The Greeks. The Showdown Effect has an impressive visual treatment on the explosions to make them standout and give the game the ultimate 80s/90s action movie feel. As well as this they've tried to keep a certain atmosphere about the game, making the damage persistent throughout the levels to give the place you're fighting in a demolished feel thanks to your fighting. However areas will reset back to normal when you start a new match.

A similarity can be drawn with Double Dragon and Dead Rising with The Showdown Effect as once the magazine, rockets or bullets have been used from a weapon that's it, it's pretty much useless in terms of shooting, however each level features a variety of environmental weapons that you can use which are an array of items you'd expect within the location. Be it a kitchen knife, pool cue, frying pan or even a bar stool, anything you would expect to be able to use in a fight seems to be possible.

Arrowhead also has plans to potentially add a slowdown system, similar to Max Payne's bullet-time. However as The Showdown Effect is a multiplayer title they aim to tackle to problem of slowdown across multiple users by having an area of effect style slowdown which encompasses an area when you activate it, adding a larger cool factor to the fights while not giving every other player the advantage. 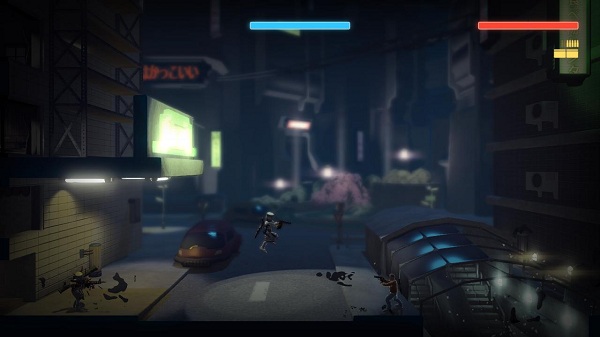 Currently the Showdown Effect only has Showdown mode, but Arrowhead are planning on adding an additional mode, similar in style to a King of the Hill defending ground style experience, but they're still working on exactly what it's going to entail.

If you'd like to check out some more footage of The Showdown Effect you can watch Paradox's longer gameplay video with Emil Englund the Design Director of Arrowhead Game Studio. The Showdown Effect is currently set for a Q4 release during 2012 on Windows and Macintosh and looks to be a great addition to Paradox Interactive's line-up for the year.