id's new post-apocalyptic adventure is set for release in less than two months and with a vast array of trailers and behind the scenes videos they're doing a great job of getting everyone super hyped up for its upcoming release.

To put a cherry on top there's now another edition of the game you can get your hands on. Sadly it's not a more expensive edition with some variety of massive art book and cool statue, but I can't always get everything that I want.

If you wanted a little extra for your money and were planning on picking up the Anarchy edition with the bonus DLC you can now get the GAME exclusive Collector's Edition of RAGE which features a few more little extras. Containing the following: 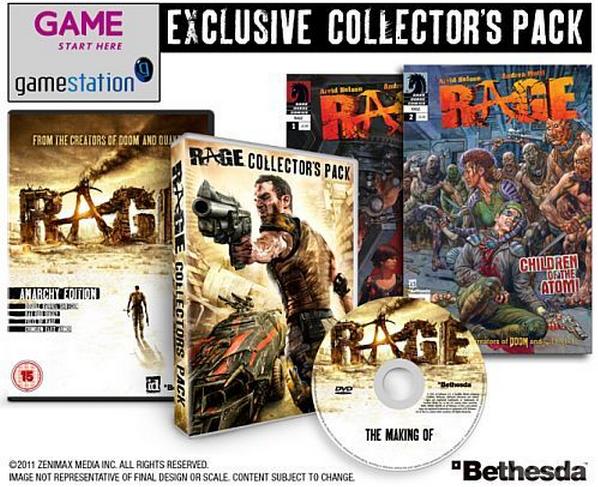 While the DVD features the behind the scenes videos which are available to watch on the internet it also promises interviews with the team as well as exclusive videos from Quakecon 2011.

The comics are two of a three part mini-series which are set prior to the events in the game and act as an extension of the RAGE universe and give more of an insight into the game's storyline.

The Anarchy edition features four downloadable in-game items to help you on your quest. These items are:

Priced exactly the same as the standard and Anarchy edition should you want to watch making of featurettes and read two of the comics then this is the edition for you!

If you're still not sold on RAGE and think its all wasteland and dust check out the newest video below showing off Gearhead Plaza. We're completely sold and can't wait until October for id's new release.

RAGE comes out on October 7th and is available for £39.99 on Xbox 360 and Playstation 3 or £29.99 for Windows you can pre-order it from GAME and Gamestation here. If comics and making of DVDs aren't your thing you can still pre-order the RAGE Anarchy edition off most retailers for the same RRP.