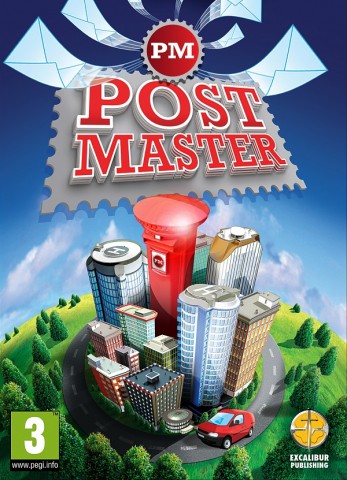 The world of simulators is like no other, and thanks to folks like Excalibur Publishing the halls of PC retail is full of strange and interesting games that allow you to delve into any number of fields, their latest offering is a brilliant example of this that gives gamers the chance to enter the world of the postal industry with Post Master.

Your goal in Post Master is pretty straightforward, from the moment you step into the shoes of a postal mogul it is your responsibility to deliver and collect letters and parcels, transport mail around your multitude of post offices and expand the size of your company to meet the demands of a growing city. 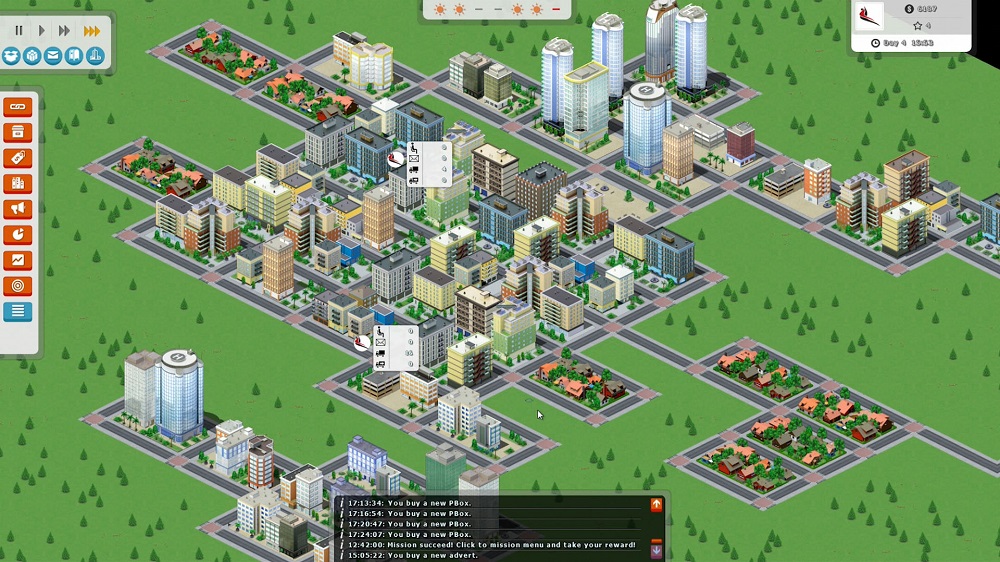 How do you meet the demands? One step at a time that's how, and whilst you can't collect and deliver post with a few grumpy men trudging around with messenger bags, you do get a nice variety of vehicles to choose from including the humble bicycle ranging all the way up to motorbikes, cars, vans, and even trucks, each has their own clear advantages and disadvantages, but to make things a little balanced, you'll only start off with access to bicycles, in order to gain access to the others you'll need to unlock them, but we'll get to that in a moment.

A workforce is nothing without a face, and people are somewhat required to use post offices to send post, so on top of letter collection and delivery out in the town, you'll also need to hire personnel to work in your post offices on the customer service desks, sorters to get your mail ready to post and... Security, to stop your offices being robbed, because apparently that's a thing! Surprisingly enough you don't need to hire actual postmen or women, presumably they come prepacked with the vehicles you purchase.

Once you've hired your workers and bought your vehicles you're almost ready to go; believe it or not, postmen don't just turn up to work and amble around the town in their jurisdiction. Each vehicle must be given a set path around the blocks of your town, and how often they wish to frequent it, this is the main mechanic of the game and using this strategically with the vehicles at your disposal will allow you to efficiently service your town. 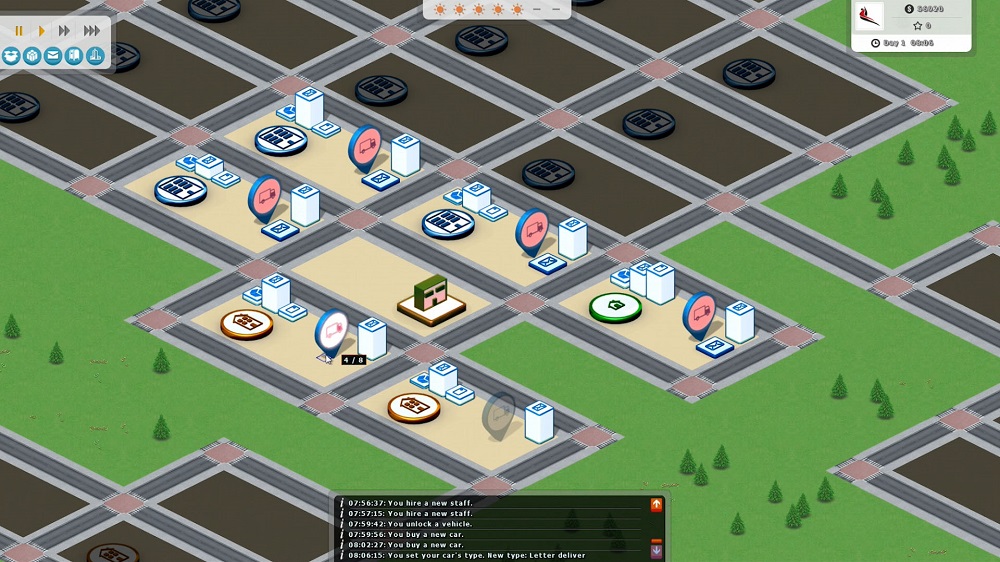 When you start out you'll be limited in the vehicles you can buy, if you want to cover as much of your coverage area as possible this will be tricky early on; you see each vehicle can travel so far in a route namely due to how much it can carry, starting with the bicycle you can only plan a path that is four blocks long, however these can be anywhere in the coverage area of your post office and you'll find handy illustrations of the particular demand that a block has, allowing you to cater for the more profitable areas, it's a very straightforward system and allows you to set up routes without issue of one way roads in a very user friendly way, you don't even have to worry about which direction they'll start!

Surprisingly enough demand is considerably high for the logistics of letters and parcels, so much so your hands will be full right from the get-go, and you'll have trouble keeping up with your competing Post Master whilst you try and raise enough stars to unlock the more lucrative vehicles and equipment for your post offices, but ones like a simple truck will allow you to service almost the whole of a coverage area in one full sweep, so its important to know what unlockables you're aiming for before you start spending your precious stars. If you want to compete in size above overall efficiency you could always 'up' your coverage by expanding on your current post offices or even buying new ones, now this can all get a little out of hand when you've got five or six post offices, but it does ensure that your coverage will never be inadequate.

If you want to be the best darn Post Master you can, you'll find you're not the only one vying for the logistical control of the mail in the town, on the statistics page you'll be able to track how your figures compare with your rival. But unfortunately again much like their previous game City Builder, your faceless competition does not appear to be invasive enough to make you aware that they're even there, and interestingly if you do sit and watch them work in the other city, you may start to wonder exactly how they do so much more business than you. 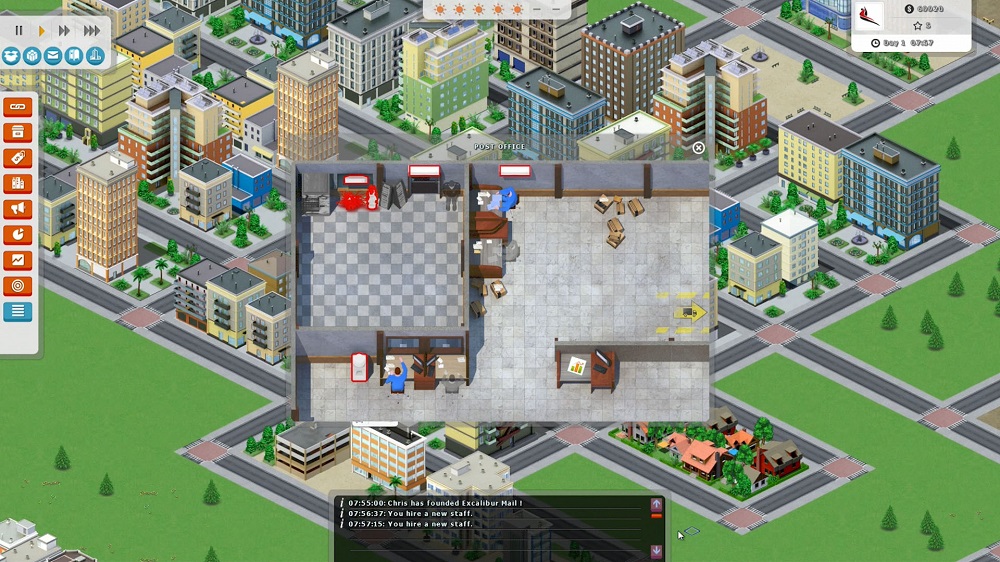 One definite trick that has been missed in Post Master is with the game's calendar, Post Master works on a five day week with weekends automatically skipped, obviously some postal services work different to the UK, but over here we like to get our post on Saturdays, heck some couriers even deliver on Sundays now, but you've no room for expansion in that respect. It's a lot to ask, but the way the game plays out, you never really feel like you're attached to any reality; days aren't numbered or named, they're just a day, this makes holidays feel even stranger, especially when some of them fall midweek, you never feel like 'right! Valentine's day is approaching, were going to have to hire more staff' which you sort of want to feel in a game that relies on holidays somewhat.

You might be thinking that Post Master looks a bit familiar, well you'd be right, as it's a game from CyberPhobX the developers of the very similar looking City Builder and Police series. If you have played their preious games then you might be interested to know that they have taken their evolving city mechanic from City Builder into Post Master, so every-now-and-again you'll notice a building site crop up that steadily grow into a building. Like any other in the city, this building will need its parcels and letters collected, pairing the city evolution with a game such as Post Master works brilliantly, and requires you to keep up with the demand of a growing city, as it asks you to expand your coverage on a regular basis. However this familiarity does come with the same 2D style of City Builder making the game look somewhat akin to the original Sim City, so some gamers needing their fix of realistic pc-busting graphics may need to look a little elsewhere.

On the subject of their previous games, it must be said that the UI for Post Master is a great improvement, some icons are still a little mysterious, but on a whole everything is pretty self explanatory, which is brilliant. Though like with all management based games you're always best to play the tutorial first, and whilst you will be inundated with walls of text, it doesn't take long to get into the swing of Post Master's ways. 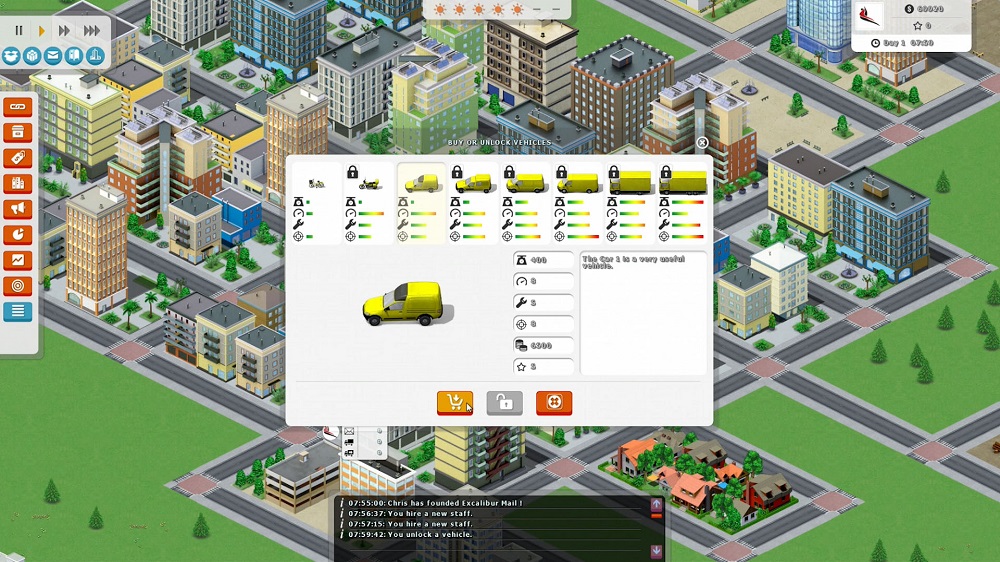 As an owner of a postal service one of the highlights is that a day only lasts from 8:00-16:00, as nice a concept that this might sound, it often strikes four for you to find that you've still got mail to sort, and parcels to deliver, and just not enough time in the day! Unfortunately the time between 16:00-23:59 becomes an achingly long wait for the next day to arrive, thankfully later on in the game you will unlock different shifts, but for the time being you have to suffer the wrath of watching the timer as it steadily increases.

On the subject of time, much like you would expect of the life of a post master, the game itself is pretty slow paced, and if you think I'm overreacting, an in-game minute passes every few seconds on the normal speed, and not much takes place in the span of a minute, so unless you play the game on its 'super fast' setting you will be sat watching the town for a very long time indeed!

As a big fan of the timetabling systems of the great Cities in Motion and A-Train, sampling the path and daily task system of Post Master is a little underwhelming; you are unable to set specific times for deliveries like post boxes state, instead you must set your vehicles to deliver or collect round the clock, leading to poorly maintained equipment, for a slightly more forgiving rota you can give an hour or two between each completion of a route, or even schedule them to carry out one shift in the middle or beginning of the day, a little disappointing if you want your operations to run to the exact minute.

It can't be ignored that once your vehicles are set up that's practically it, you just sort of sit and watch your employees do their rounds with very little interaction required, you may decide you wish to run a new vehicle, or perhaps employ another customer services team, but even then you can't tailor them to work during the busy periods when you really want them to. In fact the only other real interaction requested of you will be the occasional priority mail, and possibly a robbery, but both of these happen so infrequently, -or at least they did to me- that you just sort of glaze over as you watch your minions do your bidding.

Post Master is a brilliant little insight into a very complex world, but is just far too simple to push the right buttons, some simulation fans will enjoy this, but a lot of others will expect a deeper, engrossing management game to pass the days away.

Post Master is out now for Windows PC and Mac in either boxed form from the Excalibur Publishing website, or digitally through Steam.