Simulators often focus on a vehicle or a group of vehicles, what makes Ports 2011 so different to other games before is it focuses on a location, similar to Farming Simulator, the heart of the game is to be found in the iconic setting of the harbour and the work that goes on inside it.

You’ll find a few of the usual simulator vehicles present in Ports, such as the Wheel Loader and Forklift truck, however you’ll also control a variety of harbour-themed vehicles including the Straddle Carrier, the Reach Stacker, the Container Gantry and the Crane, each is controlled with similar keyboard controls for the least confusion possible which works rather well for a multi-vehicular game.

Some gamers are not unfamiliar with the docks setting, fans of Shenmue will reminisce over forklift truck driving, racing every morning and getting down to business shifting crates. If Shenmue and other games has taught us anything, a port should be a living, breathing environment, unfortunately, instead Contendo have created a sterile, isolated atmosphere, where work is more of a laborious task than one of enjoyment. 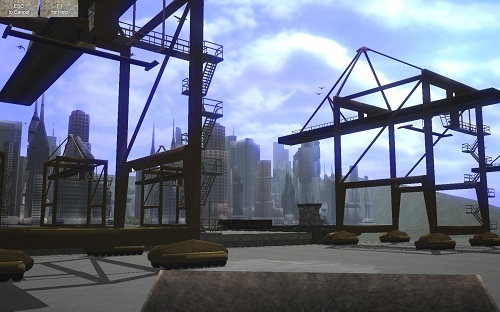 The game consists of three different modes of play; Missions, Business and Free Play. Missions are the most structured part of the game, and over 20 missions you’ll find yourself loading up ships with containers, taking temperature controlled containers into cold storage, racing colleagues around the port in a variety of vehicles. The missions are entertaining, however there is a lot of repetition, after all, how many different jobs are there to be performed in a port.

That said the types of missions you’ll be undertaking are long and arduous; Ports 2011 is not an arcade simulator like the recently released Demolition Company Gold. If you came to the plate expecting more than unloading containers from ships, or loadings containers to ships, there is, it's just under a different guise as you unload coal into trucks, load cars onto ships and move containers around your port.

However if you prefer to get on with your own work at your own pace, then you’ve always got Business Mode; it’s sort of the poor man’s career mode, that acts more like a sandbox. Looking after your Port, ships will pull in that require you to unload them which brings in money, without money your Port will go into disrepair, and you will have to buy new vehicles to keep up with demands. As you go about your Port duties you’ll find other jobs appear such as cleaning rubble off of the premises and moving containers out of the way, however the time between jobs is quite long, and the Missions mode is just far more engaging. 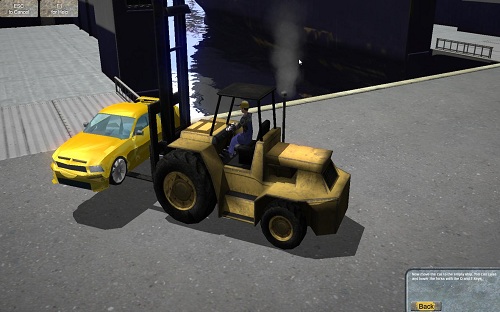 If you were never very good at managing money, perhaps you found yourself running low on funds in SimCity, Theme Hospital or Theme Park, then maybe the Business mode would put a little too much pressure on you, well you’re in luck with Free Play. Free Play is practically the same as Business but without profits, without the need of taking out a loan when your funds get low, or buying new vehicles. Without this, Free Play is only truly for the most dedicated of harbour enthusiasts, as there is little appeal without the thrill of profit.

There is a strange allure that comes with the monotony of unloading containers from a ship using the Container Gantry, loading them with the Straddle Carrier up to a warehouse and then dumping them inside with the Reach Stacker. But unfortunately that strange allure is all the game really has going for it, once the 20 missions are over and done with, there is no pull to the Business Mode. After all, there are no new vehicles to unlock, or contracts with shipping companies to properly engage in, and so you are left feeling a little empty, and wishing that you were carrying out as many jobs as you encountered in the Missions mode.

The real surprise feature in Ports 2011 is the added Editor that allows you to create your own levels from a standard level, and populate it with components like containers, vehicles and general props to busy yourself with. These levels can then be played in the Business or Free Play modes, and although you cannot place down warehouses and buildings the ability to design your own levels in a simple and straightforward way is pretty unique to a simulator. 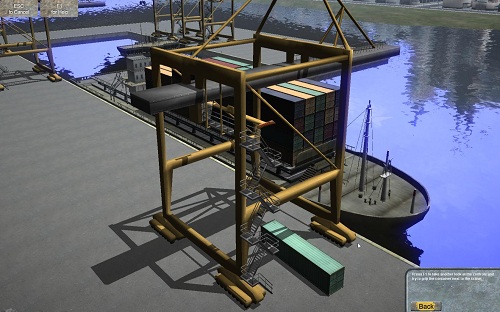 To increase the potentially unlimited longevity of the game, Contendo also included some inbuilt Trophies, that'll have you completing some pretty crazy feats if want to get them all; prepare to load 100 containers with everything that you can, and drive over 1,000km in each vehicle, and most challenging of them all; play the game for over 2 full days.

Alongside the disappointing Business mode, there a couple of issues that must be mentioned; your avatar skips around like an army man in Toy Story, and simulators in the past have had far better -however still poor- examples of run cycles; however this is only a minor issue in the world of simulators. In Ports 2011 collision is far more of an issue, and you’ll find yourself having to reset your vehicle often as your cargo gets stuck onto other objects and cargo.

It’s a specific sort of simulator fan that enjoys a game like Ports 2011, with great potential, and some engaging missions, the game falls a little flat with Business and Free Play. Whilst there is a strange allure that keeps you loading and unloading the containers, there just isn’t enough to keep your attention in this enjoyable but badly executed simulator.

Ports 2011 is available now for Windows in all good retailers for the SRP of £24.99, if you like your simulators arduous and very different, then Ports 2011 just may be for you.