Police Force is a new simulator from Excalibur Publishing; with less management than the recent Police Simulator it takes a more hands on approach, and it easily appeals to those looking for a bit more action in their simulators, or just the chance to try out police work for a few hours before they realise that it is definitely not for them.

You begin as a pair of rookie Constables fresh out of Police Academy ready to hit the streets and enforce some justice on the scum that infests a district of your town. Whilst you start off as a small fry in a big pond of villainy Police Force contains an actual tiered gameplay system so you can watch yourself rise up the ranks with good policing, and before sooner or later you’ll be overseeing the whole town rather than a small district.

To keep you on the straight and narrow there are a number of commendations and achievements that can be unlocked by ‘doing good’; completing shifts successfully, checking on civilians and chasing cars will put you in the good books, however fail all your emergency calls in a shift and you’ll get a stain on your records.

Every shift that you take is 30 minutes long; you’ll be given an order for the day to investigate such as checking 25 people on the street, taking photos of drug dealers, busting cigarette smugglers; even taking down posters, and most orders only take around 10 minutes of your shift to complete, depending on the job of course. 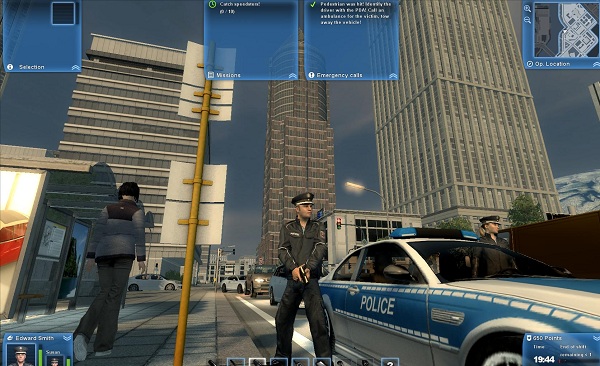 So what do police officers do all day? Mundane police tasks of course and you’ll have to take it all in your stride, or you’ll never be the task force that citizens can believe in and depend on. Whether you want to take up the role of a beat cop and roam the streets on foot, or drive around with a watchful eye on your district it's up to you; either way you’ll come across many offences in a day’s work simply from pulling over vehicles and looking out for suspicious characters.

To keep you on your toes you’ll also get calls in from HQ on time specific crimes such as robberies, riots, hooligans, traffic accidents and fights. If you don’t reach the crime scene in time you’ll find that criminals will leave, and riots will break up and there’ll be a few empty jail cells and a few more criminals wandering the streets. Successfully completing the HQ calls will ensure commendations in your future in the police force.

To aid you in your policing work you’ve a few tools of the trade at your disposal, some of them you can find a way to live without, others are in-disposable such as your trusty PDA used to hunt out the crims as they walk the streets, or your Walkie Talkie which you could never make an arrest, tow a truck or call an ambulance without. Then there are your two best friends; the Pepper Spray and Handcuffs, that is unless you like a bit of rough-n-tumble, in that case you might want to enforce law with the slightly more brutal Baton and Gun combination that will see your suspects leaving in an ambulance rather than a Police transport.

Occasionally on the job you will carry out shifts as plain clothes officers; you may be investigating clubs selling alcohol to minors, or investigating drug dealers incognito, these make a great addition to the game, however you are still expected to carry out the everyday duties as a police officer; calling for illegally parked cars to be removed and chasing down drunks, in fact you can arrest someone in front of the those you are supposedly disguised from and they don’t even notice, it just seems like a waste to have such a brilliant concept so poorly executed in this fashion. 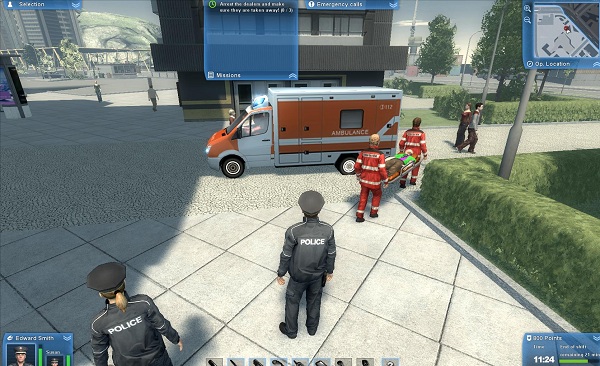 The one let-down in Police Force is like some simulators, there is just no soul in the game; the people of your district are pretty ungrateful, there are no thank yous when the thief of a briefcase is caught, no good mornings as you trundle up and down the streets, and riots are a mere three disorderly youths. Similarly most animations are rubber banded, and those that like their animation fluid may not be a fan of Police Force when they watch injured citizens shuffle onto stretchers, and as criminals abruptly wear handcuffs when caught, if there were a little more polish on the game, it would be a gem of a simulator.

Although we don’t usually appreciate them at Gamercast, one system that Police Force is missing is traffic rules, which in a game where upholding the law is key it seems very out of place. No one minds if you run red lights in a plains clothes car, or drive on the incorrect side of the road, and whilst traffic rules do not usually aid you in a simulator, being able to drive around like a crazed lunatic leaves you desiring a few more regulations. However there will always be one traffic rule that rules them all; do not run over innocent pedestrians, it is a rule tarnished in games, and you’ll usually find yourself doing it through lack of patience, in Police Force if you happen to run over a civilian in the line of duty you will be taken off of your shift and penalised, and when you’re 20 minutes into your shift, the last thing you want to do is have to stop it abruptly!

The car driving is very good however, and rather than simulation driving, the system in place is more like Grand Theft Auto arcade style, which to some simulator fans will be a little disappointing, to make matters easier, there is also a handy damage system to keep you in check with any collisions, and an even greater indicator system that activates as soon as you begin turning, so no need to set off the indicators yourself!

Patrolling the streets in Police Force will teach you to never judge a book by its cover; the guy dressed head to toe in black with a matching beanie is not a suspicious character, and it is definitely not the black guy walking towards you, Police Force teaches you that it is always the old woman in a knee length skirt or the lady in the tracksuit, unfortunately if you are a man in a t-shirt you’re also very likely a criminal; the random designation of criminals to npcs gives a good variety to the game, so you are not able to pick out suspected criminals from a mile off, or execute your personal prejudices. 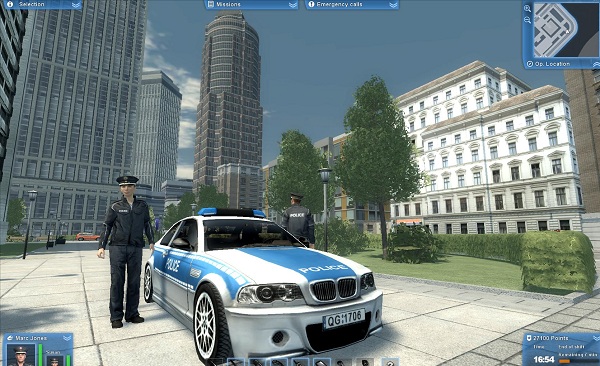 Police Force is a fun if slightly rigid simulator, and it is far more action packed than the usual vehicular affair, although the whole game is practically rinse and repeat, it can’t be too different to a realistic policeman’s shift, although it seems Germany appears to have a bit of a problem with revolutionists putting up posters.

Police Simulator is available December 9th 2011 for the SRP of £24.99, if you wanted to be more hands on than the recent entertaining management based Police Simulator, then you may have just found what you were looking for in Police Force.