Every year Rising Star Games release a large amount of high quality Japanese developed titles which the UK would never get to see if it wasn’t for them hand picking these little gems. Well this time round Rising Star Games have teamed up with Mitchell Corporation to release the amazing PANG: Magical Michael on our shores.

Taking a new spin on the original series, the game follows Michael a young aspiring magician who foolishly failed an experiment of his that lead to balloons being dispersed all over the world, wrecking havoc at major landmarks. To right his wrong Michael has to travel the world to destroy every balloon in order to save the world and bring it back to its original state. 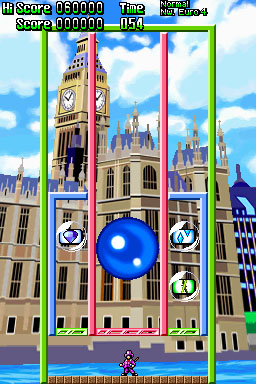 PANG: Magical Michael is a great re-imagining of the original Pang, staying true to the series, by keeping hardcore arcade-style gameplay. Containing the old one hit dead mentality, so if you accidentally walk into a bubble or don’t shoot soon enough you’ll find yourself retrying a level, so you need some quick reaction skills to be great at this game as well as a good sense of foresight in bubble bouncing.

The story can be found under Tour mode which features a variety of locations around the globe that Michael has to fly to on his magic carpet, along with four smaller locations within each area. With each level you have the chance to be stylish or boring which is rated on a variety of terms such as shot speed, skill, item pickup, etc and you are also given a degree for your score, you could get anything from penniless or cool. This of course puts a large emphasis on the need for high scores which is of course one of the hooks of an arcade game.

There are a lot of hidden modes in PANG, once you've met the correct criteria in Tour mode you can unlock the hidden stages, and once completing them you unlock the Challenge mode which is a mode centred mainly on getting the highest score possible. Once you've completed all of those you then unlock the Arcade Special stages which allow you to jump, which was a feature I sorely missed in the Tour mode, as well as some extra items you can use against the bubbles.

One thing PANG: Magical Michael has more than enough of is a variety of powerups, ranging from different gun types and level altering items you'll find yourself hoping for certain item drops on those super hard levels, although handily each powerup has a tutorial to make sure you know what you’re doing when you get them, which are introduced just before you start a level with the powerup in it. Just make sure to dodge those washing tubs!

Multiplayer works extremely well, having the one more go nature to it stopping you from being able to put it down, especially when on a winning streak. There are two types of multiplayer which are Survive and Attack Ball. Survive pits you up against your opponent with the aim to keep throwing back a shockwave balloon at them, and causing them to have too many bubbles on screen, resulting in their demise. It is important to note though that all bubbles take off a piece of your health in this mode. 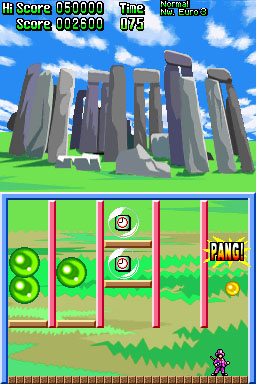 The aim in Attack Ball is to burst as many bubbles as possible in order to grow a large bubble of your own to blow at your opponent, and they have to try and do the same. Each hit you take of an opponent’s bubble will hurt you, and the amount of damage you take is dependent on how large the bubble was. And if bombarded with bad bubbles you’ll soon find yourself the looser. Also unlike 'Survive' the normal bubbles only render you useless for about 2 seconds, the only real danger is those opposing bubbles. All multiplayer modes can be played with multi-card play, vs CPU and single card play via DS Download Play.

The game also features a survival mode called Panic Mode, allowing you to attempt to pop as many bubbles as you can without dying, and featuring a level up system to let you know how well you’re doing, if you're determined enough to get past level 50 you then unlock a new touch mode for playing Panic. Generally Panic mode is slightly more lenient than Tour mode by being given three lives and having flashing bubbles which stop time momentarily. It does feature a Tetris style ‘this is where your next bubble is coming from’ feature on the top screen as well, giving you a chance to get ready to burst those bubbles. Also if you're finding Panic mode too hard on your own if you set up to play with a friend in multiplayer (it will only appear if connected with a friend) you can also play co-op Panic mode.

PANG: Magical Michael is a great sequel to follow on 21 years later; it's an enjoyable DS game that will keep you busy for hours. One recommendation however is; if you give up easily with games PANG may not be the game for you, it requires dedication and the mentality to keep retrying if you keep getting stuck on that one stage. Because once you've played it a few times you learn how the level works and the general areas the bubbles bounce in, meaning if you just keep trying you will move onto the next level. PANG Magical Michael is severely addictive and we highly recommend it to fans of the original and those up for a challenge.

PANG: Magical Michael is only available on the Nintendo DS and can be found in most game stores and online with a retail of £19.99