OMG: Our Manic Game, developed by Arkedo Studio was one of the launch titles for Windows Phone 7. At first glance it looks like a bog standard shmup, similar to some of the Space Invader reboots over the years, only mixed with the awesome bright neon graphics we've come to expect from the likes of Geometry Wars.

Like with most vertical scrolling shooters you play as a spaceship, or at least some sort of triangle with smaller triangles attached. Your ship constantly fires a beam directly out the front of it. The controls are nice and simple all you need to do it drag your ship around the screen to avoid enemies and any projectiles.

The real innovation with this game comes from the risk/reward mechanic. Tap an enemy and they go into manic mode, and fire off many more projectiles than normal. Sounds harder to deal with? It is, but when you kill an enemy all their projectiles on-screen also explode. Each projectile is worth a certain number of points as such having more projectiles on the screen from activating manic mode will give you far more points. Bosses have a similar system, but instead their projectiles bounce off the sides of the screen back at you making the playing space much more crowded. 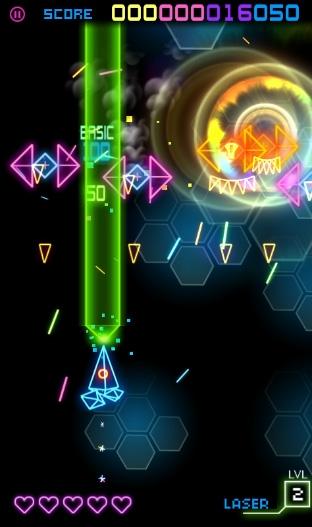 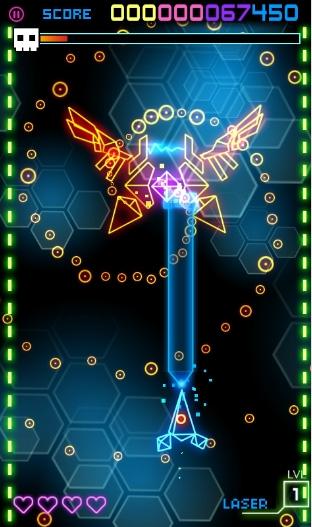 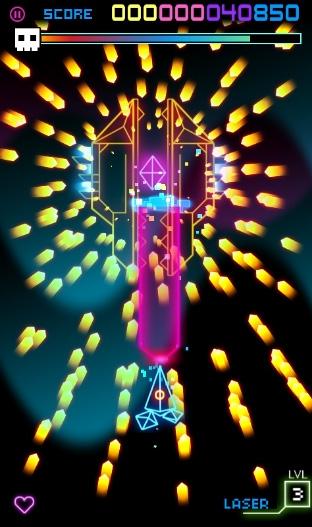 The game features two game modes, a five minute mode where as you might suspect will put you into a game that lasts five minutes, but it also features an infinite mode, where the game will last forever and get increasingly difficult as the game speed accelerates the longer you're playing.

Surprisingly for a game of this type the only upgrade your ship gets happens automatically, every five waves you pass without dying gets you a laser upgrade, die and you lose all your laser upgrades. There are only five levels of upgrades however each one making the laser more powerful but also slightly wider.

Overall this is a solid game, with decent gameplay, graphics and sound. I am so very tempted to give it a perfect score, but at the same time I want more. There's no question in my mind if the game featured a couple more game modes and maybe some weapon upgrade options it would be perfect. But with just two game modes it does get a little bit repetitive after a while.

OMG: Our Manic Game is available on the Windows Phone Marketplace for £2.49. It features Xbox Live support and as such has a trial mode and 200G up for grabs.