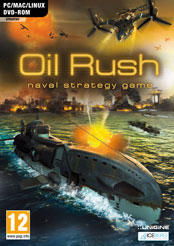 The toll of a nuclear war hits hard, or so we are told in countless stories, well Oil Rush’s universe is no different, and once the ultimate weapon is used on the earth to end a war, another begins. Earth as we know it is plagued under the sea and with no land in sight, man has reverted to the fight for oil, and he who controls the oil controls the universe!

Oil Rush throws a few game modes at you to change the way that you see strategy forever, if you are into management games and aren’t a massive traditional real time strategy fan, start reading!

In Oil Rush everything can be executed with the mere click of your mouse button, all units’ fire automatically so you won’t need to give out individual orders to fire, all you have to worry about is taking them from platform A to platform B, change your mind? You can send them back. Everything is simplified for the player and it whilst it does feel very strange at first to a traditional strategy player, it certainly grows on you. 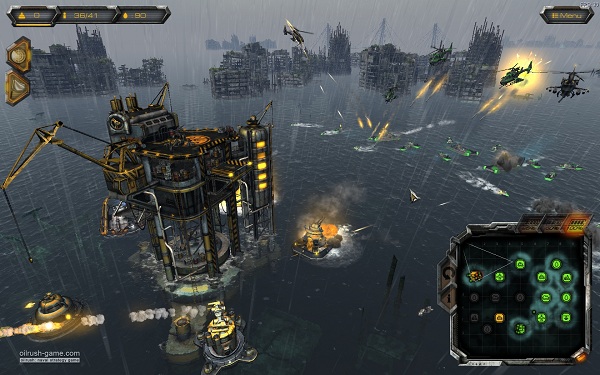 The campaign doesn’t really throw you in the deep end, it starts you off the paddling pool, and doesn’t really trust you to start swimming for a few chapters. Spanning across 16 missions it takes things slow; gradually giving you the whole game in what is actually an enjoyable and challenging experience. Whilst the story and dialogue is nothing to call home about, it's basic and entertaining, and gives you more than your money’s worth as you assume the Australian rookie Kevin taking on a variety of factions and bad guys as you and your commander gain control of the waters with a combination of naval and aviation units.

Quick game is where the game is really at, and if you want to try your chance at training yourself up for some multiplayer, quick game is your safest bet; with 15 different maps to choose from and up to four players on a certain maps, the three tiers of difficulty will have you sat on the edge of your seat and you try and best your opponents. What is superior with quick game is that it is considerably more entertaining than the campaign because you actually have the full game at your fingertips; and with the full tech tree, all three towers and all platforms types on a map there’s a lot more experimentation to be had.

Oil Rush is incorrectly billed as a real time strategy tower defense, but the only real towers involved are built around the platforms that you control as a basic form of defense, and with only three towers, and no wave based system, it is really just a straight simple strategy title. 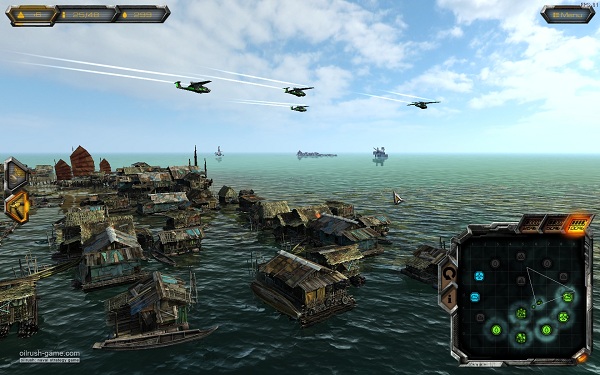 As well as removing direct control of attacking your opponents, Oil Rush also removes the need to base build and build units; each platform that you gain control of produces a set amount of units that will protect said base until you tell them otherwise. Lose a unit? In a short amount of time it will be regenerated. Basically, micromanagement is taken away from you, and all you need to worry about is moving your units around to do their business, taking away the arduous and repetitive nature of the RTS and instead leaving in its wake the perfect tactical test.

Oil is your commodity, it buys you towers, and will get you out of sticky situations allowing you to drop a nuclear warhead on your opponent, or call in reinforcements when it looks like you’re about to be wiped out; just a few of the notable technology tree’s active skills that can burn a little extra oil but can mean your survival, especially when you combine it with a number of the passive skills that will allows you to reinforce your defences or extract oil that little bit faster.

Oil Rush is all about precision timing and quick thinking, it takes X long to build a tower, so if you send 50% of your units from all of your platforms to the heavily guarded oil rig that is the main supply of your enemy, will your tower upgrade quick enough for their retaliation when your numbers are down? However you've enough oil to use your active skills to demoralise their offenses on approach and sabotage their towers, then you may just be in with a chance. 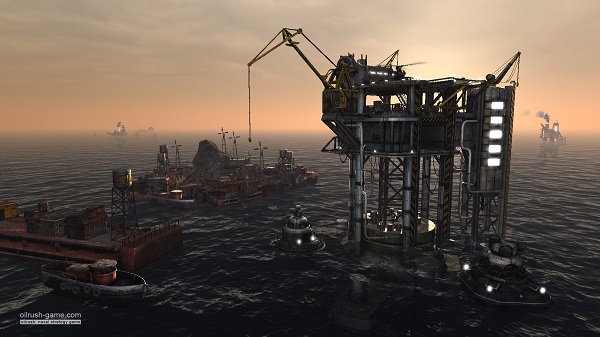 Not only is it fun, simple and engaging, but Oil Rush also looks very pretty, and features two of the best keyboard shortcuts that a real time strategy could ask for; a dynamic camera that will focus on nearby action as you send out your units, and at the press of a button you will immediately be shown any weaknesses of your platforms, two very simple features that again, make the game that bit more easier to play.

Oil Rush is a challenging and often hectic strategy, if you can keep on top of your platforms, equally disperse your units and always remain in charge of the oil rigs the world is your oyster in this fresh and simplistic real time strategy.