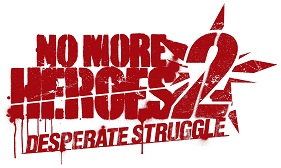 Travis Touchdown is back in Santa Destroy, however he is no longer No.1 ranked assassin, but has been pushed all the way down to No. 51, which he could care less about, until coincidentally, the current No.1 ranked assassin Batt Jnr; local conglomerate that owns the city, kills Travis’ friend Bishop, owner of Beef Head Videos.

As soon as Bishop’s head hurtles through Travis’ motel window in a paper bag, the shit hits the fan, and Travis is back in his element, vowing revenge upon those that murdered his friend, except this time his element contains softer shadows, with much smoother graphics, oh and expect more blood, more violence, and more sex. Frankly the game is dripping with style.

A lot has changed since the original, don’t expect to drive around Santa Destroy on the Schpeltiger, No More Heroes 2 is far more compact, it’s no longer trying to be a sandbox game, everything is far more linear, but in a good way. Because of this approach it means that you no longer need to save up mountains of cash for your next battle, making the gameplay far more approachable. Of course they have kept in the part-time jobs, and there are now revenge missions which are similar to the K-Entertainment missions from the previous game. 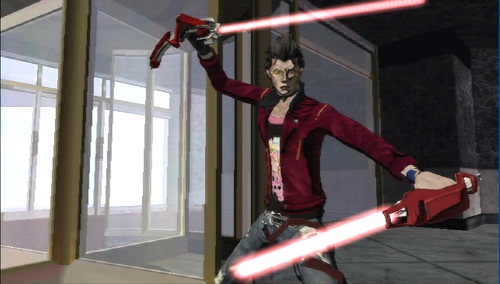 Unfortunately though, the assassin ranked matches are more about slashing the bosses, which still have a strategy, but it isn’t less necessary to defeat them.

It goes without saying that No More Heroes 2 is extremely violent; you can slice enemies in half, chop off their heads, all of which in a glorious fountain of blood. Decapitation is carried out in style, and the bloody screams of agony seem far more sincere than ever before as Travis utilises 4 different beam katana’s as well as some new Dark Side modes, the best of all being Cranberry Chocolate Sundae, which transforms Travis into a Tiger whom all enemies will run away in fear from.

As well as our hero Travis Touchdown, you will also control two other characters in Santa Destroy; Travis’ willing apprentice Shinobu who featured in the original, as well as his twin-brother Henry, both characters make a nice change from Travis, as their play styles are both very different, although they perhaps do not get as much screen time as they deserve. 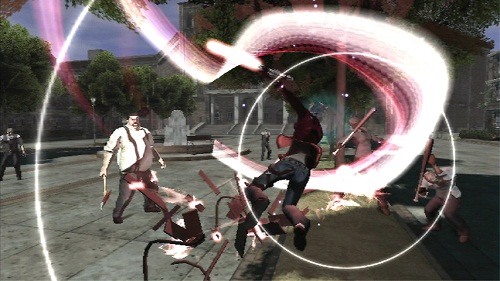 No More Heroes 2 is full of as many crazy characters as you would expect from a Suda 51 title, a personal favourite being Kimmy Howell, a young teenager who in wanting to prove to be Travis’ No.1 fan decides it’s best to kill him to show her devotion, oh and she’s wearing a school uniform, playing a recorder when this information is told to Travis in the form of a poem! On a side note, a rather interesting cameo of Takashi Miike pops up in No More Heroes 2: Desperate Struggle, as Bishop’s friend that pays a visit to Shinobu, his cameo was completely unexpected.

Mini-games are a big feature of No More Heroes 2, most of which are all played out in gorgeous 8-bit glory, with 8 part-time jobs, from a Bizarre Jelly schmup, to sparring and running at the gym, the best of the mini-games has to be ‘Man the Meat’ where as Travis you must fry steaks to your customer's orders, and the best mini-game of all; although not in 8-bit is your task to get your cat Jeane in shape, as she has put on a few pounds since the last game. 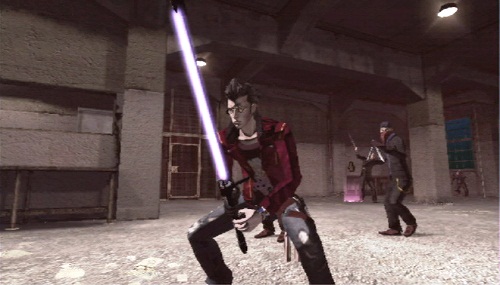 Like most of Grasshopper Manufacture's games No More Heroes 2 is constantly breaking the fourth wall, however one common attribute that seems to have disappeared —as strange as it sounds- is the dialogue is far too comprehensible, it is usually shrouded in mystery for its incomprehensibleness, with certain characters making no sense, however in No More Heroes 2, the dialogue seems too polished, of course this is good, but Suda 51’s games like Flower, Sun and Rain are elevated for their strange use of the English language.

After completing the game you also unlock a new option on the main menu of 'Death Match' which allows you to rematch all 15 assassin's individually in a time trial-like element, allowing the game to live on that bit longer.

Suda 51 has claimed that No More Heroes 2 is the game that he always wanted No More Heroes to be, and he’s definitely not wrong, the mini-games are enormous fun, the combat is less of a grind and the bosses are more whacked out than ever, the game has improved in so many ways, that the few issues it does have are insignificant, if only it were longer.

No More Heroes 2 is available now exclusively on Nintendo Wii at all good retailers for the SRP of £29.99, we hope you all enjoy it as much as we did!

You can also check out our feature video on the fantastic action game, alongside an interview with Rising Star Games' Tyrone Walcott. (subtitles following shortly)