After the sad recent demise of the longstanding Lucas Arts most would believe that old-school adventure games are dead as well, heck some have thought they've been dead for years but they'd be wrong. For those that know their adventure games would know that's not in the slightest bit true as Daedalic are one of a few remaining companies that strive to release brilliant and beautiful point and click adventure games. Within the next few weeks you can expect a brand new game to be heading to PC which will suck you in straight away.

Immediately the look of The Night of the Rabbit hits you square in the face, at a casual glance it looks more like a beautiful animation than a game, but then Daedalic have a keen eye for visually astounding games as you can see from their back catalogue. Of course the background images aren't the only beautifully made segment of the game, each and every character feels unique. All fitting perfectly within the world and never seeming out of place plus some are just completely adorable, like Ursula the owlet.

The game starts a little more mysterious than you'd first presume from a quaint game about a child who dreams to become a magician, however from the recently released trailer you can confirm that it's not just a little boy having fun. Straight away though things seem slightly odd, from the get-go you witness and take part in a conversation with an odd character. Plus of course from all the screenshots you can tell that our main character is not just spending his time in his own world as field mice aren't usually the size of a child. 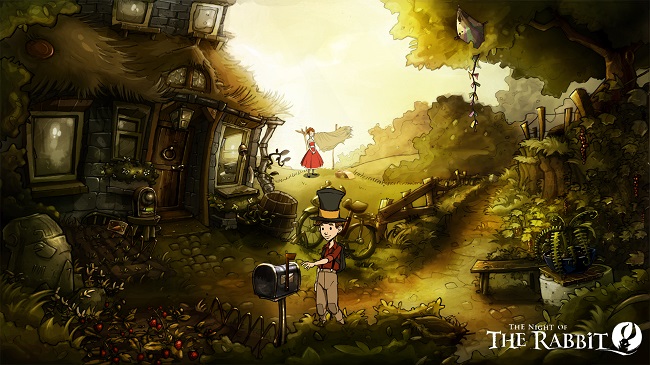 The initial conversation however is just a taster, from there on you get an example of how the game will really lead you. It all begins in a quaint little house on a summers day where you meet the protagonist, Jeremiah Hazlenut and his dream of becoming a magician. Helping his mother with baking a blackberry pie as a starter task helps set the mood and gets you used to their way of solving puzzles.
As a nice addition the tutorial seamlessly fits within the game while also being completely skippable for those veterans out there. The tutorial is explained by Radio DJ Ludwig Burrower on the mysterious station Swamp Radio 103.5 who magically starts talking with Jeremy; who was equally baffled with the fact that he was talking to a radio. The tutorial itself works well and teaches you all the available keyboard and mouse shortcuts for the small amount of things you need to know so you can have a favourite play style.

Being an adventure game you of course expect the standard puzzles, the game itself is simplified to a one button click to interact, dealing with choices of conversing, taking items and looking at things. It makes it a much simpler game when potentially stuck not having to try every single interaction type possible. Along with the simple interactions, from a key moment in the game you're given the ability to quickly see which items in the world that you can interact with for if you're a little stuck. It doesn't really have to be used but it can also show you magical story based beings within the game as well.

The puzzles start off very simple with not a lot of thought required, however as the demo progressed they do become a little more head scratching. If you do get a little stuck there is a hint system within the game which is through communication with the Marquis, a large white rabbit that you meet, although this only unlocks from a certain stage in the game. But I imagine it'll be very useful while playing when it is available if you're stuck, as the worst thing with an adventure game is having to resort to a walkthrough. 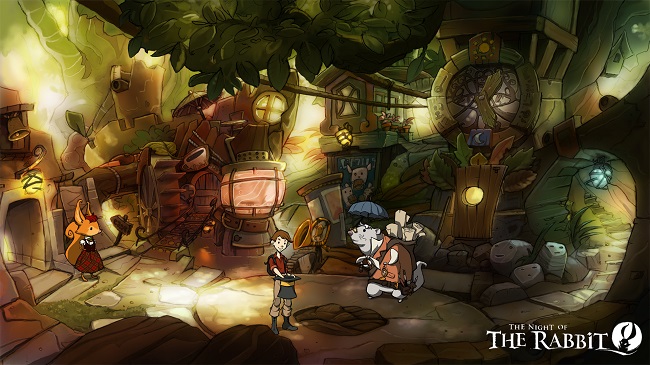 With every adventure game a key requirement is good voice acting and witty dialogue as you'll be listening to the characters more so than in most other games as the story is the key element of the game. Luckily their choice of actors has worked out well with not a single irritating voice, yet still keeping an exaggerated cast full of distinguished characters. The script in the segment I played was well written with funny moments here and there. Along with the dialogue they have accompanied the game with some delightful music, giving a light airy tone to the game while also keeping it energetic and fitting with the current mood in the game.

The Night of the Rabbit also promises to include a wide range of collectibles that include a deck of cards and magical dew drops that can be found in and around Mousewood. All the collectibles found in the game tie into the story and help expand the lore of the game. The collectables are accessible from the pause menu however I was unable to see what pieces of story they extended.

The Night of the Rabbit is set for release on the 29th of May on Windows and Macintosh. It will feature full German and English voices along with localisations for Russian, Polish, Czech, French and Spanish. The preview I played through was only probably a couple of hours long and only accounts for a small section of the full game, however I happily spent 8 hours mooching about in the world, listening to the music, conversing with the characters and taking it all in.