We’ve got everything from fighters to RPGs, hack-n-slash to puzzle games, the financial year is almost over and this huge line-up of titles is not surprising as companies bust out their games in time for the start of April. Here’s our pick of the releases this week.

Fight Night has come a long way since its introduction to the EA Sports brand in 2004, and the series now has such spectacular graphics it even has the time to fully integrate a gripping and story driven career mode that is not your usual climb the ropes affair. With an improved analogue sticks control system Fight Night Champion looks and feels fantastic, and you won’t find a better boxing game any time soon, that’s for sure. 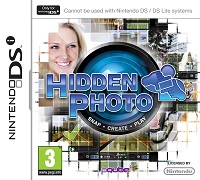 Hidden Photo is possibly the first game to make full use of the Nintendo DSi Camera, which means that the game will only work with the Nintendo DSi and DSiXL, the aim of the game is seek and solve, and you can take photos of anything from your living room to the streets of London to solve puzzles against the clock. Its surprising that for a console that has been out for two years, Hidden Photo is the first game to make good use of its camera.

Hyperdimension Neptunia is a new quirky and thoroughly Japanese RPG available exclusively on the Playstation 3, similar to Segagaga that parodied the Dreamcast console, HN parodies the consoles wars in a turn based RPG. Taking place in the world of Gamindustri the world is split into four regions, Planeptune, Leanbox, Lastation and Lowee... need I say more?

Pokémon returns once more to prove that it is still alive in the hearts of children with their newest entry in the handheld game series. Pokémon Black and White takes place in the region of Unova. With 649 Pokémon to catch you’ll have your commute sorted as you battle other trainers in a greatly improved isometric environment. We gave up on the Pokémon series after Gold and Silver, but the games are still as addictive as ever if you get into them quick enough.

Dawn of War II: Retribution is the newest instalment in the Dawn of War franchise, based on the Warhammer 40k universe, Dawn of War is an extremely effective real-time strategy game. Retribution allows you to play as six races each with their own separate campaigns, including the Tyranids, so it will be interesting to see how they communicate to each other... considering they speak telepathically to each other through the Hive mind.

The tried and tested Dynasty Warriors gameplay returns in another non feudal China setting, Warriors: Legend of Troy focuses on the Greeks and Trojans during the ten year Trojan War. Contrary to any Dynasty games in the past, Warriors is far more graphic than any game in the series and is rated 18, so if you are into your gruesome Greek tragedies, and hack-n-slash gameplay, then Warriors: Legend of Troy is for you.

With Dawn of War II: Retribution most PC gamers will be busy fighting this weekend, however more casual gamers will rejoice at the release of Pokemon Black and White, personally Hyperdimension Neptunia sounds absolutely marvellous. Will you be buying anything this week?