NeverDead one of our favourite games from the line-up at this year’s E3 has now been officially dated! Konami have also confirmed that NeverDead will obtain the full DLC treatment and will receive a number of add-ons after its release. 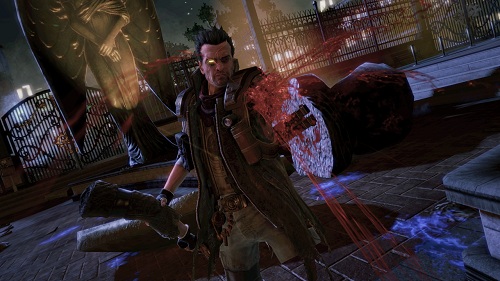 NeverDead is the Rebellion Software and Shinta Nojiri co-development that re-invents the hack-n-slash game with one simple gameplay element; your protagonist cannot die. No matter what is thrown at you, Bryce is immortal; an arm lost is merely a flesh wound, and even when all of his limbs have been removed he can roll around as a head and use his amputated arms to attack his foes.

Loose a leg? Bryce will have no problem hopping around; evading his enemies, he might not be as fast, but he’ll get to his ultimate destination. Loose both legs and you’ll be in a bit of hot water, but Bryce will continue to crawl around as far as his arms will take him.

Never before has a game been so wild, and crazy as NeverDead, and unlike what you may think, it actually works, and with a soundtrack by Megadeath, this fast-paced, gun-toting hack-n-slash will blow Devil May Cry out the water!

NeverDead is set to hit the Playstation 3 and Xbox 360 February 3rd 2012, if you like heavy metal, blood, guts and want a true fantastically gritty 2000AD experience, you are going to go crazy when NeverDead is released.