Mystery P.I The London Caper is once again another seek and solve title, this time set in as you may guess London, following the tales once again of a Private Investigator on the hunt for the Crown Jewels which have been stolen by thieves, the Royal Family have been given 17 hours to pay a ransom, and you have been hired to hunt them down and offered £10 million in return. Once again developed by SpinTop Games it's another seek and solve title in their collection, this one like Amazing Adventures spans across a large series to cater for all those casual seek and solve fans.

For each level in the game you have to find a number of objects hidden amongst the environment which differs between most levels, however Mystery P.I has a twist, because you are allowed a choice of which location to go to, and you can drop in and out of the levels when you don't feel like you can find anything more. So if you don't want to waste all your score on using hints you can attempt to find enough items across all the locations available to you at the time. There is also another nice little feature in the game, which informs you when you've found enough items to find the clue, where you then are confronted with the choice to find the clue or to continue finding items allowing you to rack up your score. 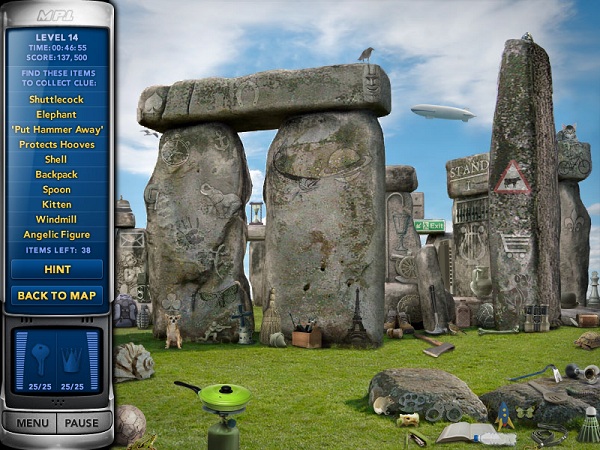 Like Amazing Adventures Around the World you have the choice to collect some special items through-out the levels which allow you to unlock an Unlimited seek & solve and a Match 3 bonus game. Being slightly British you must collect two crowns and two keys (which is why it's slightly British) in each level, both counting towards your ultimate unlocks. Also don't worry if you've missed out on any of the items as you will revisit locations giving you the chance to find that key which is hidden oh so well.

Unlimited Seek and Solve allows you to chance to find every single item hidden amongst the level, you're faced with all 25 locations and between 60-80 items per level, and of course no time limit stopping you. Whereas Match 3 which is also found in the main game when finding clues. It is similar to Bejewelled; wanting you to match 3 items to remove them from the board although you have to keep matching things until all the tiles on the board have turned to gold, which will turn when you've matched items on them. 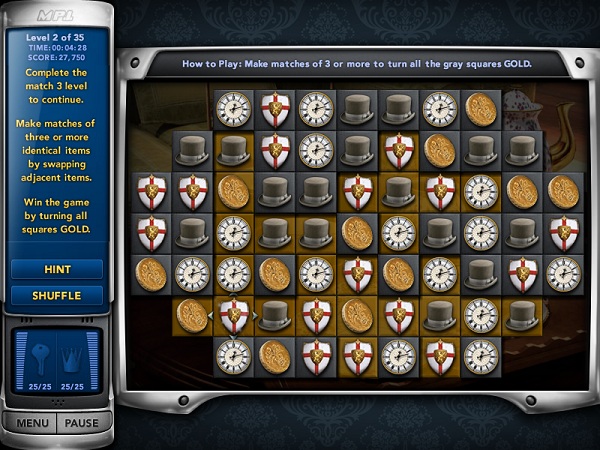 Overall Mystery P.I The London Caper is a solid Seek and Solve, I do warn some players though as if you have played any of SpinTop and PopCap's other titles you will see some repetition of some objects, however it's still nice and fresh on the eyes with a variety of backdrops and new items here and there. It's a great game to waste some time on and keep your visual memory up to scratch, and of course it's always nice to see a lot of locations from the UK put into a game as well.

You can pick up Mystery P.I The London Caper off PopCap Games. Also if you love this game you should definitely consider picking up Amazing Adventures Around the World.