When I first heard the title BlindGiRl I must admit I was more than a little intrigued, could it be that someone was having a go at a sound game? Would you actually be the blind girl? I am pleased to tell you that the answer to these questions was yes. So I fired up the 360 tracked down the trial and was instantly hooked. You are indeed BlindGiRl and she can only do three things; walk, sing and scream. To differentiate the three each one is a distinctive colour (red, green and blue).

I was very impressed with the game’s main mechanic and really liked the way the levels revealed themselves through the sound waves created as the player moves around the level. BlindGiRl’s ability to sing also helps to reveal the levels, and you will need to master both techniques and combine them efficiently if you are progress through the game. The simple graphic for walking indicated by a pair of little feet was a very nice touch, alongside BlindGiRl’s round pig-tailed head. 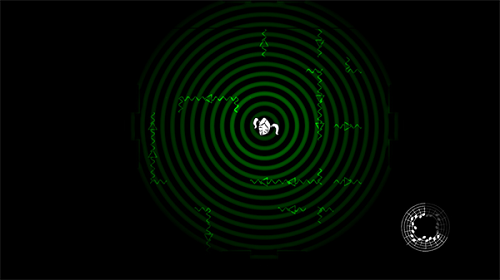 BlindGiRl eases you in with some fairly simple levels, introducing one concept at a time, for example in the first few levels when the seeing eye enemies appear, they are very few, so you have time to get used to them, giving a nice learning curve to the game.

Your main point of call is the level select screen represented by two staves filled with colourless notes, levels do not have to be played in order which is very good if you happen to get frustrated with one level and wish to try something else. You have to manoeuvre round each level to find a musical note that gets added to your song when you find it you will then be taken back out to the level select screen. Upon starting most levels you are given a cryptic clue about what you should expect to face, the levels are well thought out and in return may take a bit of thinking to finish them; some more than others.

One added feature was a colour blind filter, however this made the game much more difficult as colours became too similar for my eyes, I also much preferred the simplistic colour scheme that was used without the filters on, but the idea itself was quite intriguing. 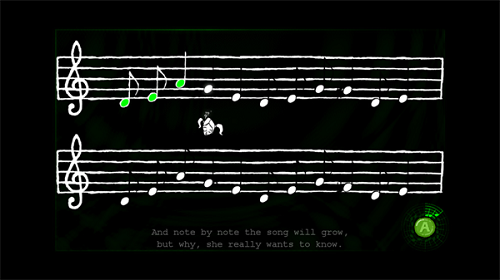 I can honestly say that it has been the most worthwhile 80 Microsoft Points I have spent so far, the game was a good challenge and very different, something I am glad to have spent a few good hours playing. You may notice that there are no bad points that have been mentioned which I’m pleased to say is the honest truth; there was nothing I disliked about the game.

A very innovative game that was fun to play while still proving quite a challenge at times.