March saw the release of one of my most anticipated Nintendo WiiWare titles of the year. Having previously been shown a video back in November, Muscle March was mentioned back on Episode 176 of the podcast.

Muscle March is the result of what you get when you cross muscled men, a polar bear and a woman with the Nintendo Wii. The story is simple an evil person ranging from a kappa to an alien has stolen your protein pills and your team of muscled beings -unable to live without them- must get them back! 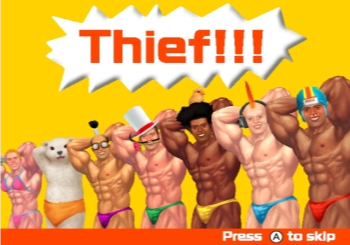 As you may notice from the screenshots this isn't your average game, however, in regards to gameplay, it could be likened to Tetris or even Blockout because your role as the player is to put the right shape in the hole you are presented with. Which may sound pretty simple, but as you progress through the game the faster the characters move, and the more difficult it is to make the required shape in time.

There are four different poses which the game uses while playing, as well as these you will also be required to move the Wii Remote and Nunchuk with a running style action in order to catch up with the stealer of your protein pills. 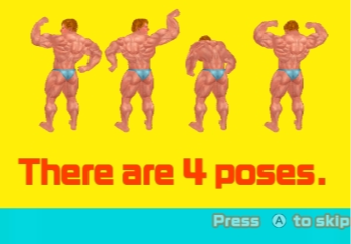 There are two versions of the game available to you; 'Muscle March' which is a single player game, where you have the choice of three separate locations which are the City, Village and Station, these feel fairly easy at the start of the locations, but the difficulty steadily increases on the final stage, the difficulty will of course be determined by your reactions and hand eye co-ordination, however the Gamercast team found it quite difficult on the final stage, and our reactions aren't that bad.

You then also have 'Endless March' which supports 1-4 players, which is accomplished via sharing a set of controllers. This as the name clearly states is an endless mode, taking place in a whole new environment and you simply play until you can't take anymore. 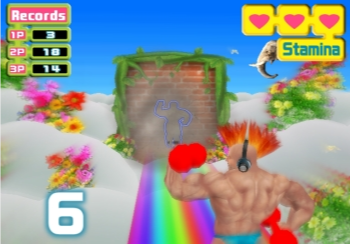 The level in Endless March is very reminiscent of the infamous Rainbow Road, which any Mario Kart fan will know, however, thankfully it's not that difficult, as there are not many obstructions in the way of the muscled man in front of you. The level starts with a rainbow road twisting upwards around a beanstalk, changing as you get progressively higher. On a first attempt I successfully posed correctly 61 times, which got my muscled guy running at 60mph, after many failed attempts 61 was the high score I set. 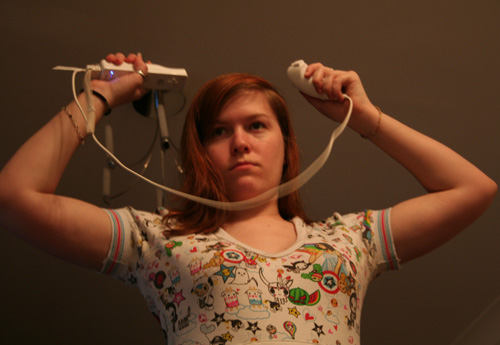 Overall I found the experience of playing Muscle March extremely enjoyable from the combination of the gameplay, audio and visuals. At a price of 500 points it's a great title to play on your own for a little exercise, or to have some fun with friends watching you pull silly faces and poses. I highly recommend it for anyone with odd tastes or wanting a bizarre WiiWare title. It's just a shame they didn't expand the game by adding more levels and perhaps a turbo mode.