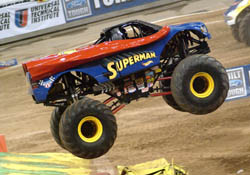 Feld Motor Sports and Activision today announced the return of Monster Jam 2011 for the Wii, DS, Xbox 360, Playstation 3 and PSP, and it promises to be the most ultimate monster truck experience out there.

Players will get to experience the truck inductions, pyrotechnics and lighting as they are brought to life in a way that they have never been before in a game, taking place in eight real life stadiums, here’s hoping that the Cardiff Millennium Stadium is in there!

With 30 officially licensed Monster Jam trucks, including fan favourites like Grave Digger, Maximum Destruction and Grinder, players will also be able to create and customise their own trucks, with thousands of options. In the singleplayer game you will need to rise through the ranks of your competitors to get to the Monster Jam World Finals, and head-to-head multiplayer will take competition to another level.

Feld Motor Sports love their partnership with Activision, and feel that "Monster Jam 2011 will be the ultimate monster truck video game, our fans are going to flip when they get their hands on it!" Monster Jam 2011 is scheduled for a release later in the Autumn this year.

I don't know about anyone else, but I'm hoping that Donkey Kong and Superman will see their way into the game!