As you may know, the London MCM Expo was held two weeks ago at the London ExCel Exhibition Centre at the London Docklands, it may not be E3, but it’s pretty much the closest we have in the UK to San Diego’s Comic con.

The MCM Expo caters to all, and you can buy a wide array of comics, manga, the latest anime, try out the newest board games and most importantly; play some unreleased games. Unfortunately, unlike most of the bi-annual expo’s there was very little cosplay that took our fancy this October, but to be fair, we were far more distracted by the impressive list of games that were on show. 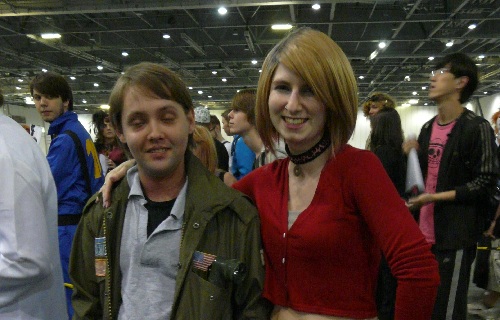 With Square Enix, Tecmo Koei, Rising Star, Namco Bandai, Ubisoft, Doublesix, 2K Games, THQ, Nintendo, Capcom and PQube exhibiting their latest games there was an overabundance of games to pick and choose from, so the real question is, what did you play?

When Rising Star Games announced their partnership with CAVE to release Dodonpachi Resurrection in the UK we couldn’t wait, so when Rising Star announced that they would have it playable at the show we couldn’t get our hands off of it. Its fast-paced bullet dodging action was just the thing to string you up all ready for a day’s worth of fun at the Exhibition Centre, and to think the game is available now!

We pride ourselves with our love of indie and low budget games, so we were pleasantly surprised to try our hand at Doublesix’s All Zombies Must Die with a group of suitably dressed zombies.

This four player local co-operative title is a quaint little twin-stick shooter that is not for the feint hearted! Its fun, but challenging story makes it a good contender for one of the best family games released in time for Christmas. 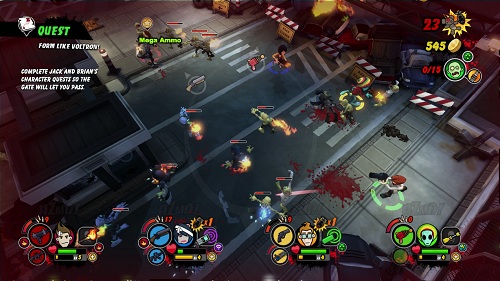 Gamercast have a very dark taste in games, and The Darkness was one of our favourite games of 2007, so we were tickled pink when we got to get a sneak peek of it at E3. However, with the promise of a hands-on at MCM, we jumped at the chance.

In the midst of a Carnival during our preview, the new graphical style did not jump out at you, however with a hands-on, the cel shaded hand-painted textures are very distinct, and very close to Borderlands in style compared to far more obvious cel-shaped games like XIII or Jet Set Radio.

The demo introduced us to The Darkness with the new powers that are at your fingertips with quad-wielding, the collection of essence, and the use of your environments. However it did also establish us with far too many complexities that the game appears to have; the demo presented to us was very linear, and vastly scripted with some very fiddly control methods, granted there was some reprise with the fun to be had with the use of the Darkness in throwing objects, the new Black Hole power and devouring the hearts of the wicked.

The sequel to Starbreeze’s underappreciated game is definitely a step in a different direction, however only time will tell if it’s for the better or the worse when it is released in 2012 to the harshest of critics.

Nintendo had a huge presence at the show, with a host of unreleased games for rabid gamers to give a play including Mario Kart 7, Super Mario 3D Land, Super Pokemon Rumble, Zelda Skyward Sword, Kirby’s Adventure, Go Vacation and the first appearance of Luigi’s Mansion 2 in the UK! 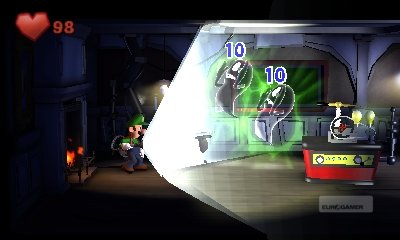 We couldn’t keep our hands off of Luigi’s Mansion 2, and being massive fans of the original, it was fantastic to see the game shrunk down for the Nintendo 3DS. For starters; it looks absolutely incredible, and Luigi is back in the game shocking ghosts with his torch and zapping them up with his pint-sized hoover.

However, playing around with the game you wonder why they are releasing the game for the Nintendo 3DS and not the Wii, after all, the touch screen is used for the map, and the 3D is not entirely necessary. Whilst the game is undoubtedly one of the biggest titles to look forward to on the Nintendo 3DS next year, it just makes you wonder the reasoning towards its platform release.

Similarly giving Super Mario 3D Land some play time, the 3D felt foreign, and moving into the different depths of field is very odd for those that have never played on the system before. But nothing the game hands us is revolutionary for the console; we’ve seen 3D Mario with Super Mario 64 DS, and whilst the prospect of a new Mario game warms the heart of every gamer, is it really something that is going to change the handheld?

Getting a bit jaded at the 3DS games it wasn’t difficult to focus on the tens of other games at the show, especially with Volition’s Saints Row The Third spreading utter mayhem and general craziness with their preview of the soon to be released story driven sandbox.

We caught up with the developers behind the game and asked them a few questions:

" frameborder="0" allowfullscreen>This was just a taste of the games on offer at the show, and although we might not have found as many video game cosplayers as we would usually spot, the MCM Expo only grows at each show, and fans were out in their droves to sample the newest upcoming games, meet the faces behind the voices of some of the biggest characters in video gaming, and pick up some great merchandise from the hundreds of stalls.

The MCM Expo London Comic-Con will return to the ExCel centre next year like clockwork on 25-27th May, after the fantastic line-up from this year’s events, we cannot wait to see what 2012 has on offer; we hope to see you there!