We had the pleasure of a preview of the new PDLC for Mass Effect 2 entitled Overlord. Taking advantage of the new vehicle Overlord is full of 2-2 ½ hours of emotional story entanglement with we were shown by project director Casey Hudson!

Overlord will tackle the issues that players of the hit title had in regards to the lack of exploreable worlds which many felt were missing from the sequel, Overlord addresses this with 5 main locations across Lush worlds that will be far more stimulating than the rather lifeless planets that you were forced to drive around in Mass Effect. Overlord re-uses the Hammerhead, with a different approach, where it will be more manoeuvrable. 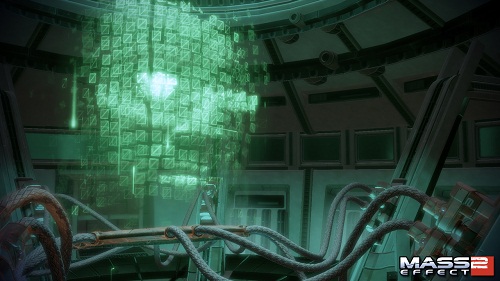 The story revolves around a distress call regarding a Geth base, where a Geth and human symbiote are calling to you, Overlord will be your standard, run and find mission, subsequently turning into an AI gone crazy scenario, however because this is Mass Effect 2, everything is done so well the ordinary become extraordinary.

Overlord will, like Mass Effect 2, focus on gaining an emotional response from the player, wherein a large portion of the end of the DLC focuses on Shepherd being pulled into the AI’s mind to give you a view into everything this person/Geth has suffered, ultimately leading to your decision; will you take it down or not. Overlord will hit Mass Effect 2 in June for 560 points on Xbox 360 and Windows.

Overlord also brings a welcome return to the loveable Space Cows that had yet to make a comeback in Mass Effect 2, hopefully there won’t be any more Shifty Looking Cows