As some DSi owners may have noticed, Nintendo have recently begun re-releasing their Game and Watch titles on the Nintendo DSi Shopping Channel, the whole series remains extremely faithful to their LCD originals, featuring both an alarm and clock feature as well as both game modes A and B and although you don’t play them with the touch screen, and instead you use the buttons, the series is definitely worth the 200 points that each game will set you back. 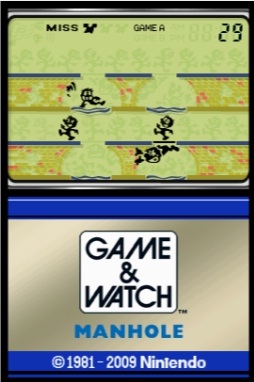 From the 9 titles available we picked a personal favourite; Manhole. The recreated LCD screen is gorgeous, and as close to the original screens as you can get; they have even included fake transparent graphics for when the characters positions on the screen are not in use.

For those unaware Manhole was the sixth Game and Watch game made in the series, you assume the role of a workman who must plug holes in the street, moving from hole to hole so that the pedestrians can cross, however if you don’t get to them in time they will fall into the sewers, three strikes and you’re out! Like all Game and Watch titles, Manhole can quickly get repetitive, but if you have a spare 5 minutes, Manhole is a game you can pick up and play straight away for some frustrating quick draw entertainment.

As strange as it sounds, the Game and Watch titles can also make beautiful music, think Tyres from Spaced raving along to ordinary sounds, then play a game like Manhole and you can’t help but become entranced by the multitude of beeps and boops.

The DSiWare Game and Watch remakes are certainly faithful to their originals, they are not the updated titles of the Gameboy’s Game and Watch Gallery, and are much closer than the ‘classic’ versions of the titles that the Gallery’s gave us, for 200 points; around £2 you'd never find the original LCD for so cheap, so if you’ve got a DSi, pick up at least one of the Game and Watch titles. In terms of faithfulness, and for bringing back memories of a time where LCD games were the best form of entertainment, you’ll not find a more original addictive games than those with the Game and Watch name, if Manhole doesn’t sound tempting, Mario’s Cement Factory is a great challenge!

Manhole is available now on the DSi Shopping Channel, where they have also released Ball, Chef, Donkey Kong Jr., Flagman, Helmet, Judge, Mario’s Cement Factory and Vermin, all for the low price of 200 Nintendo Points.