Magrunner: Dark Pulse is a first person puzzle game takes place in a not too distant future, where Kram Gruckezber -think about that name a sec- runs the giant corporation LifeNET, think of it sort of like Facebook in ten years time, its used by everyone, everywhere in the world, and has replaced all major public services in exchange for advertisement or other services. Gruckezber is also hoping to provide a has stumbled upon the limitless free energy Mag that utilises the power of magnets, which is where you come in.

For his innate scientific ability your character Dax is chosen as part of the Magtech trials, where he will compete with six other contestants with the hope to take LifeNET's new Mag technology to the stars after 3 months of rigorous testing where both your mind and body will be pushed to the limit, and all broadcast on LifeNET's social platform, no this isn't the running man, but its sure going to challenge your puzzle platforming! 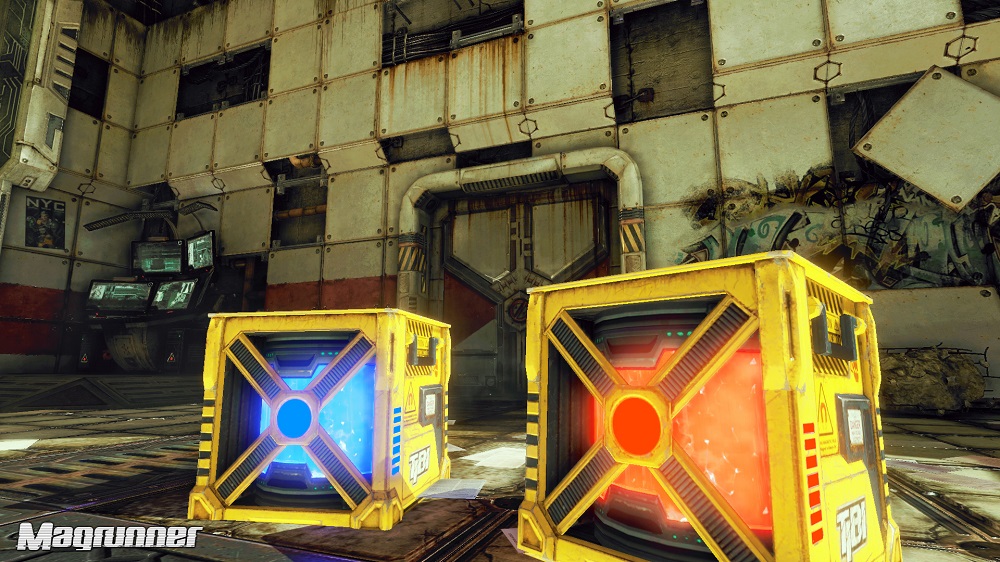 Its very easy to compare a game like Magrunner to Portal, after all the two both feature scientific 'guns', however unlike the portal gun, Dax's Magtech Glove deals with magnetics, its two distinctly coloured beams send out charged polarities that must be used to attract and repel various obstacles in order to proceed, although its interesting to note that rather than repel, two of the same colour attract. What you get as a result is a very interesting and tasking mechanic, that couldn't be any different to Valve's award winning game, in fact if there were a game I would personally compare Magrunner to, in both in look and feel, it would be Teotl Studios' The Ball.

The puzzle aspect of the game is genuinely involving, and yet is a very simple concept that you will grasp within minutes of tackling the first training room. Generally puzzles involve one of two aspects; small cubes, and platforms on a fixed rail, placing two cubes on the floor, and charging one with a green polarity, and the other with a red polarity will send the top cube sailing through the air, which more often than not, you yourself will use as a means to get higher. The same goes for railed platforms, charging the start of the rail with one polarity and the platform with the same will attract the platform to the start of its course, changing its polarity to the opposite will send it on its way to the end of the line. Its simplicity is marvellous and you'll find yourself hoping from platform to platform as you dictate the charge of tens of items in a room, ensuring that you remember to disable any charges when you get to hurling a small mobile cube across the level, because the last thing you want is for your cube to be repelled by a stray platform you used ten minutes ago.

It sounds pretty straightforward, and very simplistic, but when you've got to swing around a circular rail by changing a platforms polarity as it hits the middle of the circle, and jumping as it hits the apex of its curve, you've got some genuinely fun and thought-provoking platforming as you add-two-and-two together to figure out how you will reach your exit. For the first third of the game exits are clearly marked and well-thought-out signalling ensures that you always have a rough idea of where you're headed, that is, until things go a little awry after an unexpected power outage marks the arrival of some very fishy foes, and the sudden realisation that the Mag technology is perhaps not as new as Xander was trying to make out. 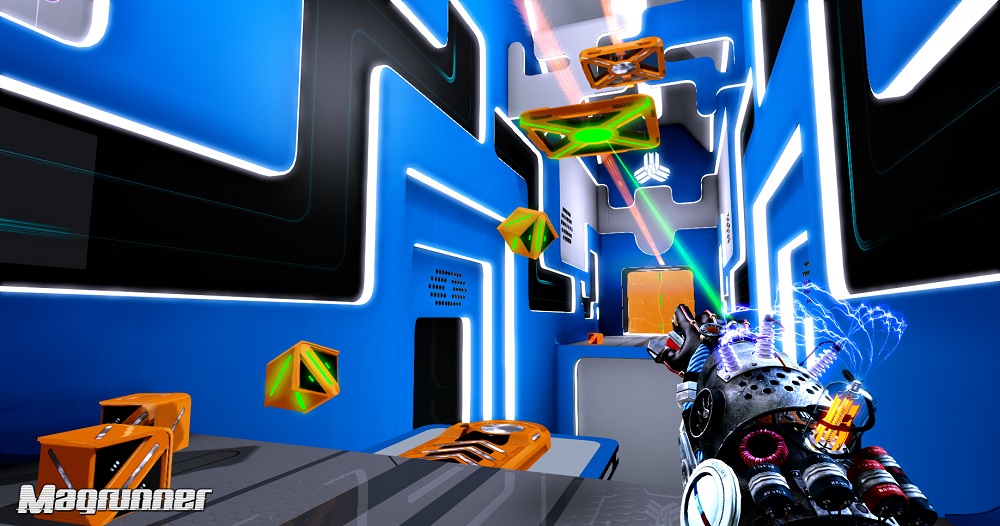 As you progress through the Magrunner trials, your Magtech Glove will have its firmware updated remotely by Gamaji, allowing you the use of your Nanomech Pod's that let you place your own magnetic charges in a level with the visage of your adorable robotic dog Newton, be warned though, if you aren't a fan of eyes that follow you, you may find this electronic pooch a little disconcerting. Aesthetics aside, Newton adds a great dynamic to the game, allowing for far more open levels that require you to directly manipulate and attract platforms, cubes and such, basically everything you thought you knew, just exploded, and now longer gaps between platforms and figuring out what is a solid wall comes into your platforming equation.

In fact its around this point that the complexity of the levels step up a notch, no longer do your puzzles have a clear cut solution that you view on the whole of one screen, levels become much larger with perhaps three or four smaller puzzles contained in one. If your brain can manage to hold out a little further, it isn't much long until you are introduced to enemies, these first take the guise of stationary turrets, and later, far more agile, monstrosities, evoking a similar dread to The Ball; no longer are your harmless levels danger free, suddenly you'll be worrying about the old Deep Ones more than the mildly hazardous floor beneath you.

Your character Dax is sort of like a boy genius and at his age he has discovered the wonders of science thanks to a little influence from his friend, mentor and the only Mutant in the game; Gamaji. You might be thinking, great, a boy-genius, I bet he says some pretty dumb things often and a lot, thankfully the writers of Magrunner actually remembered this pretty important trait of the protagonist for whenever he opens his mouth, which makes a very refreshing change! 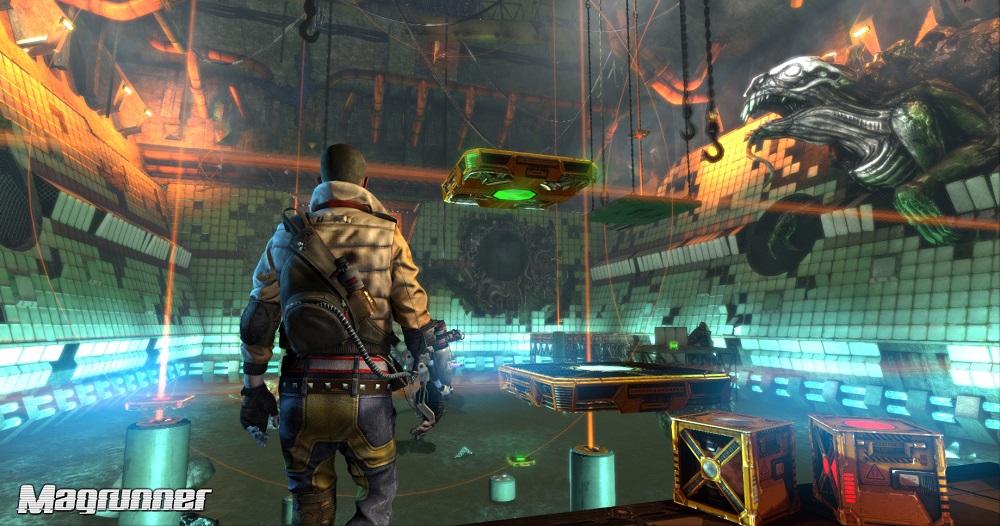 Unfortunately, mentored by a mutant, and self-taught in the slums, there aren't many rooting for you to win the glorious chance of space travel, and you'll find yourself constantly hampered with updates from LifeNET reporter Cassandra, and the very strange Xander, creator of Magtech who holds a particular unexplained hatred for your DIY scientific knowledge. You'll rarely see another person in the flesh though, so if you aren't a fan of intercom style communication, Magrunner may grate a little, however it's dialogue isn't half bad, if a little cheesy at times.

One of the only really irritating faults of the game is that each level is set up as a room with inter-joining corridors that quickly leads to Half Life 2 loading syndrome, and whilst the load times aren't particularly bad, they are quite frequent, and really interrupt the flow of the game. Unfortunately this implementation of self contained rooms does get a little stale across almost 40 levels, and you may get to the stage in the second act where you simply cannot believe that you are being made to solve yet another puzzle to keep proceeding, however as soon as you get to final third of the game, you'll forget all about empty corridors and grey service elevators.

If you're looking at Magrunner: Dark Pulse at thinking, 'eurgh a Portal rip-off', give it a chance, I did, and was extremely surprised at how engaging a puzzle platformer it really is, it just doesn't have Glados commentating on your every move. 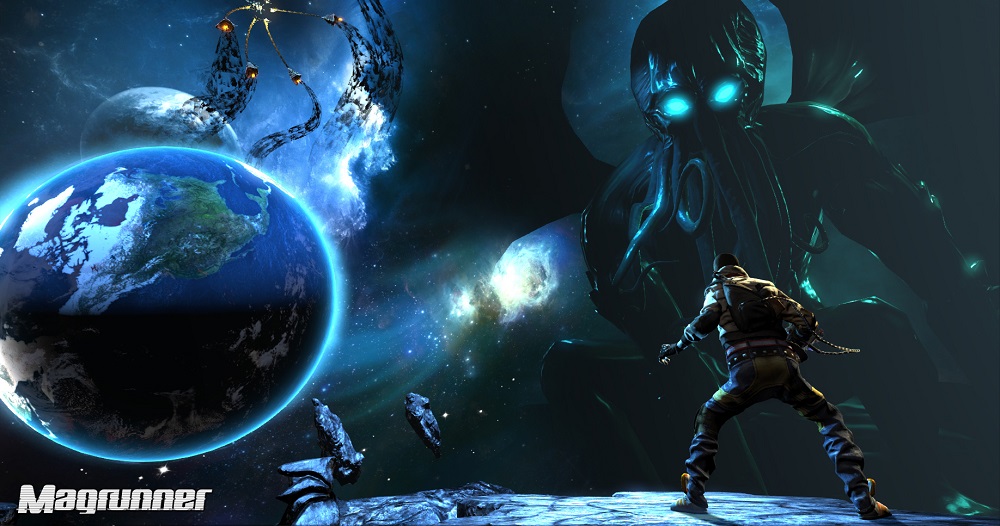 Despite it dragging a bit, Magrunner: Dark Pulse presents a competent and challenging game to sink your teeth into, you'll often find 'aha' moments of accomplishment when you figure out many of the particularly crafty solutions for a level; a much needed necessity that some puzzle games simply don't deliver. It even has a most fitting ending suitable for the Cthulhu mythos, just don't go comparing it to Portal!

Magrunner: Dark Pulse is available now on Windows PC from all good digital distribution channels for the SRP of £14.99, and will be coming soon on the Xbox Live Arcade and Playstation Network.