Mafia II is the sequel to the beautifully haunting and effective criminal drama Mafia that won critical reception in 2002 for its brash realism, and engaging city. 2K Czech, formally Illusion Softworks return with Mafia II a slightly less impressive and enchanting title, but nonetheless extremely well made and entirely engaging, bringing players forward a few years to 1943 and introducing players to Vito Scaletti the son of Sicilian immigrants in the authentic city of Empire Bay.

The most impressive part of Mafia II is the city, the design is most definitely in the details in Empire Bay, every section of the city is so beautifully sculpted, and every inch of design seems to have been taken into considered, from your introduction to Empire Bay, to the furthest edge of the city the environments have been lovingly crafted to remain faithful to the time period and authentic aesthetic of the game.

The game is strengthened by the consistent Americana aesthetic, with classic 40s-50s songs, matching clothes, beautifully modelled cars, and the overall atmosphere, Mafia II is a trip back in time to a more innocent age, and 2K Czech have surpassed Mafia II’s predecessor by creating a wholly more realistic environment to encompass the 20 year time period that the game covers. Perhaps the most iconic and memorable piece of the game is Vito’s introduction to the risquÃ© 1950s, summarising an era in the space of about 3 minutes in such a exquisite fashion, 2K Czech have created a fully-functioning time machine in their title, and it’s just a shame that other developers do not dare touch other eras simply for the amount of effort and detail that needs to be taken into consideration if you wish to do it well. 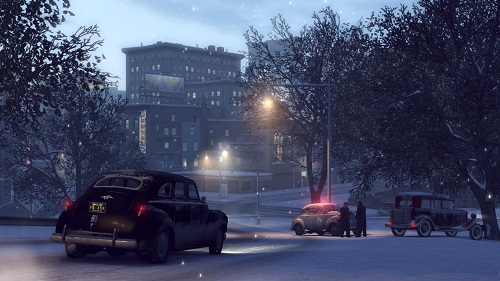 The strongest point of the game is it’s soundtrack that affectionately branches over 2 decades of music, with classics like ‘The Book of Love’, ‘Buttons and Bows’, and ‘When You’re Smiling’ the game is a true gem for fans of music from the era, and if you wish to find out the information on any of the songs you have heard in the game check out the music credits, available online.

Mafia II is a straightforward blend of third person shooting, with an extremely effective cover system, with a nice mix of guns available from the period you’ll find yourself in a variety of environments and shootouts, including stealthy sections. You will also find yourself in numerous fights, aided by the basic combat system that you will encounter throughout the story, Vito likes to throw a good punch, and with a selection of combo moves and counter attacks, though basic, is very effective and simple to use unlike Grand Theft Auto’s combat system which was all-over-the-shop.

The story in Mafia II although clichÃ©d is extremely well written, follows the Sicilian immigrant Vito Scaletti through his life, like Mafia you will go through all of the motions in the tale of epic proportions, and whether you driving home a couple of drunk friends, or trying to peddle stolen goods, you’ll never have a better time in the 1950’s in any other game. 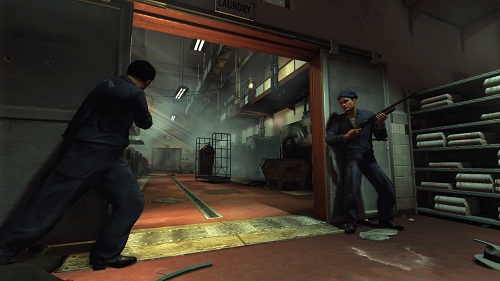 Although Mafia II does not carry as much realism as Mafia, the speed limiter is back! Thankfully 2K Czech have included one of the best, most realistic portions of Mafia, so you can’t just go speeding around Empire Bay crashing into cars, in Mafia the police will give you chase if you are seen breaking the speed limit, or damaging others cars, thankfully though you are not penalised for running red lights, or carrying guns in plain sight as you were in the original.

One absolutely fantastic option in Mafia II which brings it closer to its realistic predecessor is the choice to change the driving style from normal to simulation, which in the context of the game is incredible, so if you prefer a more realistic handling to your car, bearing in mind the time period of the game, switch the style to simulation to experience proper driving in an open world driving title that relies on shooting and combat, bearing in mind that your introduction to Empire Bay takes place in the Winter, so you’ll find yourself losing control if you happen to be driving too much over the speed limit, however if you prefer to screech around corners with relative ease like Grand Theft Auto then stick the driving style to normal, being given such an option in a game like Mafia is absolutely inspired, and perhaps one of the best features in it.

The only real problem with Mafia II which wasn’t an issue in the original was that the time in Mafia II passes far too quickly, the pseudo night/day cycle does not progress as you play the game, rather missions propel the game, making it particularly linear in the sense that you can explore the huge expanse of Empire Bay during each mission, but once you have completed the mission that day is over for ever, and if a certain mission takes place during the day, it will not change to night whilst you are messing around, if you wish to explore the city at night, you’ll need to wait till you find a mission that takes place at night. 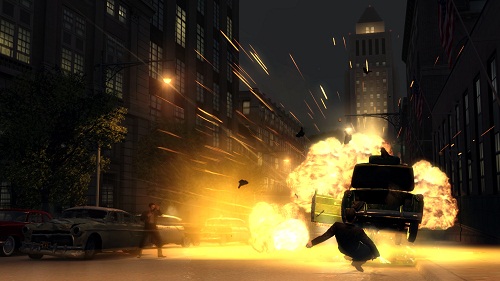 Each chapter is also compromised of one mission, which means that unfortunately the game is fairly short with 15 chapters, however this doesn’t drag away from the dramatic storyline of the game at all, but on a few occasions you will find that corners are cut, and time will skip years for the sake of storytelling which was slightly disappointing, however Shenmue goes to show that it’s not possible to successfully make a game that spans decades without requiring separate titles.

Mafia II is a beautiful game with amazing scope, set in a living breathing Empire Bay, it may not be as enchanting as Mafia was back in 2002, but you'll want to stay in the nostalgic setting that is made believable. It may be full of every mafia clichÃ© in the book, but what -mafia based- game isn’t.

Mafia II is available now for Playstation 3, Xbox 360 and Windows, for an SRP of £49.99 with a limited edition also available whilst stocks last for £54.99, and DLC to further the title is on the way.