2K Games have announced that Mafia II be having a Collector’s Edition for the Playstation 3, Xbox 360 and Windows, that will be available in limited quantites at selected UK retailers, and internationally. The Collector’s Editions will include both physical and digital elements to futher enhance the epic crime drama, 2K will also be partnering with selected UK retailers to provide free downloadable content to those that pre-order Mafia II. 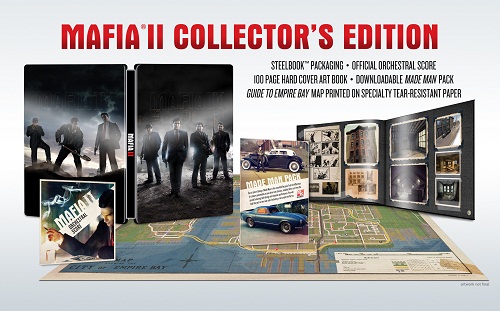 In the Mafia II Collector’s Edition you will get;

Made Man Pack: Free access to in-game downloadable pack that lets players get behind the wheel of two different luxury automobiles modeled after cars from the period. In addition, Vito will look the part with two new “made man” suits, including a vintage tux.

Hardcover Art Book: Get to know the families of Empire Bay with a 100-page photo album-style art book that takes fans through the artistic design process of the game.

Map of Empire Bay: Get familiar with the neighborhoods and own the streets with a high quality, tear-resistant map depicting the 10 square miles of Empire Bay and all the hangout spots.

Mafia II is currently in development at 2K Czech, who made the award-winning original, and will be available in the UK August 27th for Xbox 360, Playstation 3 and Windows.