One piece of news that certainly didn’t blow over our heads was the announcement of Grasshopper Manufacture’s newest game; Lollipop Chainsaw. 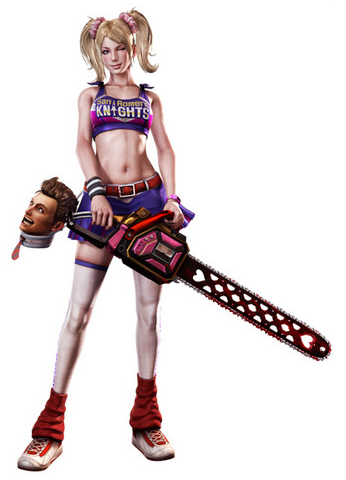 An official announcement was given today with Kadokawa Games affirming a partnership with Warner Bros Interactive to bring Lollipop Chainsaw to gamers around the world when it released in 2012 on the Playstation 3 and Xbox 360.

Lollipop Chainsaw is an all-new third person action game in development by the fantastic Grasshopper Manufacture; headed by legendary visionary Goichi Suda, and will feature the musical compositions of Akira Yamaoka. However the best piece of new all week is that they will have Hollywood writer/director James Gunn on board who will be bringing his cult pitch-black humour to the table.

Lollipop Chainsaw is the story of zombie hunter; Juliet Starling and her journey as she uncovers the root of a zombie outbreak. Chainsaw in hand she’ll slice, dice and split her way through waves of the undead only to realise that the outbreak at her high school is only the beginning.
Full of bright colours, dark humour, intense action and killer tunes Lollipop Chainsaw will be the cult Japanese hit of 2012 without a doubt, so we just cannot wait!