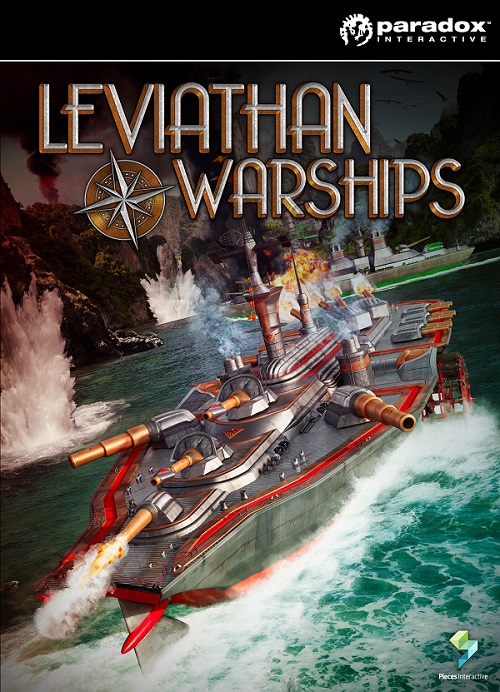 What makes Leviathan: Warships so special is that it can be picked up and played just as simply as a traditional game of battleships, it's just as complex, even more fun, and is a great tactical turn based strategy, wait don't go! It is turn based, but don't expect epically long Civilisation wars, thanks to its cloud saving and cross platform play this is one turn based game you can load up, take your turn and it'll still be light outside!

Leviathan is split into two phases; the planning phase where you will set the movement and actions for each boat under your command, and the action phase where you can observe the next ten seconds of movement and action for your boats and any visible enemies on screen. Turns are churned out relatively fast which works very well, however if you usually play turn based games with the type of friends that take hours to commit their turn, you can specify how long players will have in their planning phase, ranging from 30 seconds to 7 days, unfortunately no matter how long your planning timer is, there's no going back once you've committed your turn, so you'll just have to sit and squirm about it until your opponent/cooperative partner has committed also. 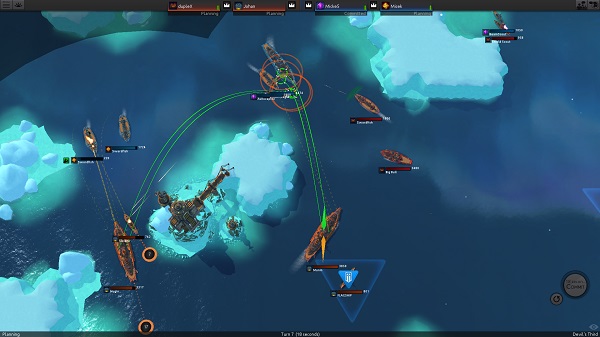 One beauty of the game is that there is virtually no standard HUD, and all action and movement is carried out via the flower menu that opens when you select a boat, movement and rotation is determined via a path that can be drawn from the bow and stern of your ship, that displays how many seconds it will take for the boat to reach its final destination. Unfortunately there are no hotkeys, shortcuts or indeed key configs, in actual fact when you look at Leviathan the game both looks, feels and plays incredibly like a tablet inspired game, which some hardcore PC players may be a little put off by.

With the same method the weapons on your boat can be selected and their reticules dragged towards their target, most weapons do have an automatic aiming system, except for special circumstances like the rail gun, however a true tactician will be more interested in ordering each ship to fire at a specific target on a specific point so as to disable a particularly tasking weapon, or just get that awkward Heavy Bully out of the way. In order to stop you from literally peppering your opponents in a hail of bullets, each weapon has its own cooldown timer before you may fire it again, and more importantly each type of weapon has a limited range in which it can fire.

However what is probably the best feature of the game is its adaptive cloud saving that allows you to carry out countless campaigns and indeed multiplayer games simultaneously and your game will be saved with each turn that you commit, making it literally the perfect game to play as you commute to and from work -on your tablet- allowing you to clock in at least one turn each way before you boot up the game on your PC and continue where you left off on the train! 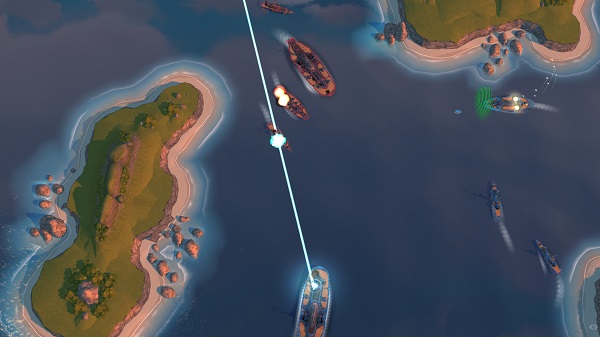 However it is important to note that there are two different ways to play Leviathan: Warships; online or offline, whilst this doesn’t mean very much on your PC or Mac, on your Android tablet or iPad this means a heck of a lot! Leviathan doesn’t actually create a local save of your online play, so if you are playing around in the campaign by yourself, and happen to lose internet or only have a wifi capable tablet you’ll no longer be able to play the campaign with your ‘online’ save, and are forced to create a new ‘offline’ save, whilst this is not the end of the world, it feels a little silly to have to have two different saves that you keep going back to.

However, the main focus of the game is the multiplayer aspect, and whilst you can partake in the 9 campaign maps or the ridiculously difficult wave based challenges alone, Leviathan: Warships is most definitely better with friends, and when you've no option to play with a computer AI you're down to depending on your friends where you can partake in a good old ambush and flank your opponents.

Successions against the computer aside, the real fun is had in versus mode that comes in two flavours; versus points and versus assassination, both types can be played in 1v1, 1v2 and 2v2, points lets you set a predetermined score that both sides will aim to achieve by destroying their opponents ships, and assassination adds an extra scout ship to your fleet that will act as a flag ship, knock your opponents flagship out and you've won, not forgetting that you also have the same weak link. Both game types are fairly simple and straightforward, but what it really comes down to is how you chose to customise your fleet. 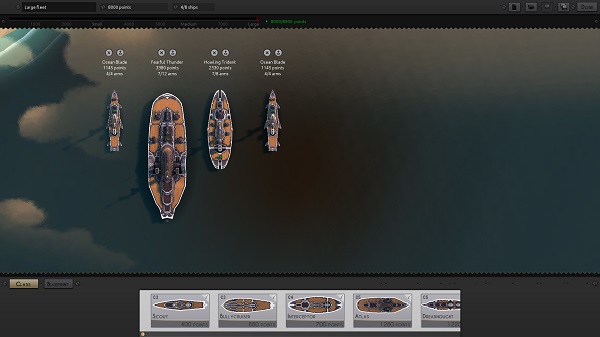 In the story based campaign you are limited with the weapons and ships at your disposal, and you are forced to unlock everything gradually with progression, however in multiplayer thankfully the guys at Pieces Interactive thought it best to give players everything possible in Versus mode, this means that instead everything comes down to your own tactical skill, oh and how well you can customise your fleet and balance your ships. You'll notice that not only do you have access to the five classes present in the game, but you'll also have access to the blueprint for most of the ships you will encounter in the campaign, each of these ships can be further customised to their limits with over fifteen different types of armaments including offensive weapons that range from standard cannons and artillery to short range lasers, rail guns and devastating rocket barrages.

However, no one really succeeds with a good offense unless they've got a full proof defence to back them up, don't worry cause the choice at your fingertips has you covered with the standard but essential shields, and tactical armaments such as the cloak generator and radar system or my personal favourite the monster munchers that call up the help of sea serpents to do your damage! Although just over fifteen armaments does not especially sound like very much, when you consider the amount of expansion slots, and the limit of arms that each class will take, each choice must be fully considered, and finding the perfect balance of offence and defence is definitely a highlight, and effective way of mastering the game.

When in the heat of battle, occasionally you or your opponent might just hit a boat right in the sweet spot that can cause all manner of problems for the crew, engines can fail, bridges can be knocked out, the boat may even careen out of control, or god forbid sink! The status effects add a level of spontaneity to each skirmish, and thankfully most come with a cooldown timer so you’ll be glad to know that your engine will pick up again, and you won’t remain out of control, however when you’re told that your boat is going to sink in 40 seconds, there’s very little you can do except for watch it go down in prolonged anguish. 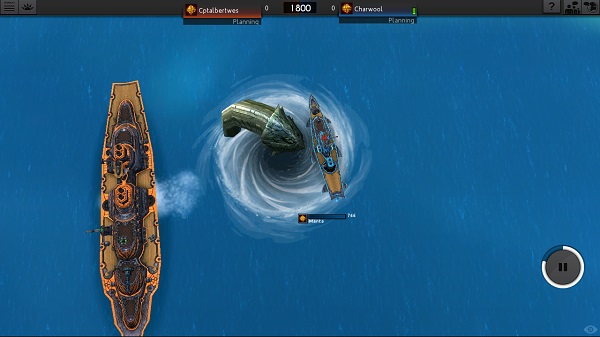 The only real downside to the game is that unless you're playing on PC and Mac, if you want to play Leviathan: Warships on the go you do have to buy more than one copy of the game, however you do not appear to be limited to the number of accounts that you may have, which means not only can you play on the go and at home, but it serves as vessel for multiplayer if you've a literally close-by friend. With that mentioned, don't go fearing that the portable versions are inferior, after playing both versions it is safe to say that Leviathan on the Android plays like a dream, those with chunky fingers may need to make use of a capacitive stylus, but you won't find anything that functions differently across formats, however again, some selective PC players may have a problem with this.

With a challenging campaign that will see you taking out enemy bases, protecting convoys and rescuing helpless boats, great co-op and the ability to watch replays of your matches, Leviathan: Warships ticks all the boxes, whether you are looking for a quick turn based game to fill in those odd minutes here and there, or a beautifully drawn out game between old friends, it delivers.

Leviathan: Warships is available now on Windows PC and Mac for £7.99 and will be released shortly on Android Tablets and iPads.