There were a few Kinect games at E3 but none of them really jumped out as being as amazingly fun as Leedmees did, perhaps with the exception of Once Upon a Monster.

Of course you could argue that it's quite similar to Lemmings, however with the exception of the EyeToy version you haven't really been able to play a Lemmings style game with your whole body, or with another player.

I had loads of fun with Leedmees at E3, especially after it was only announced at the start of the show, had I not been wondering around the Konami booth I would never have noticed the little gem. It may not look it but it is an extremely active game, which is even more fun to play when you've got a friend to play with. Although I warn you as you will need lots of space for two player because there will be limb grabbing and lots of moving around. 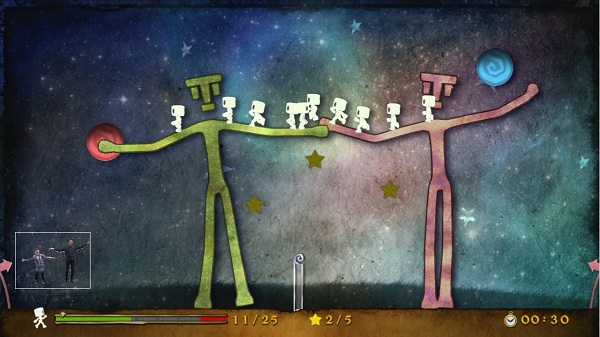 It was a really entertaining game which is great to play with friends, making it fall more into the party category, but it’ll sit there proudly as at heart it is a puzzle game.

Leedmees is out on Xbox Live Arcade for a mere 800 points. It was going to be the first Kinect XBLA title, however with Fruit Ninja Kinect and Hole in the Wall it hasn't gained that title, but it's definitely worth a download.