Made by the team at Inaria Interactive, and published by Lapland Studios comes Lead the Meerkats, possibly the most unique and interesting game to come out so far for Nintendo WiiWare.

As the name suggests the main elements of the game have you controlling and leading meerkats, developed in close association with Friends of the Kalahari Meerkat Project to ensure that all of the features in the game are true to meerkat life, and before you ask, no, thankfully it has nothing to do with comparethemeerkat.com.

I am not ashamed to say that Lead the Meerkats is an extremely cute game, and from the very starting cutscenes -that are drawn in a style akin to Watership Down's introduction sequence, with an African flair- to the little meerkats that you control, there is not one person alive that contest the adorable features of a meerkat, even though they are far removed through the RTS camera that Lead the Meerkats utilises. 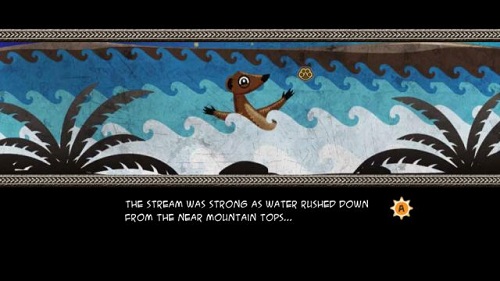 If you are wondering what Lead the Meerkats is most like, it is designed very similarly to Pikmin, you lead meerkats as a female meerkat, in a similar role to Captain Olimar. You will command them to forage for food, attack predators and perform general meerkat duties, however as soon as night falls, all the meerkats fast-track to their burrows until the sun rises the next day. The game contains four different areas, each very different in terms of their inhabitants and challenges, and the first area works very well in introducing players to the game, without threats such as predators to alienate them.

Unlike Pikmin, there is no real goal of days to achieve, you can play the game completely at your leisure, and do not need to complete a quota of burrows for the day, it is possible to play through some sections of the game with only a small amount of meerkats. However, when predators come into the picture, as well as rival meerkats, your strength in numbers becomes critical, as will your placement of meerkat look-outs that will keep an eye open for predators.

The main feature of Lead the Meerkats that I was drawn to was the concept of blending RTS elements with simulation mechanics, the simulation is fairly evident, as the game is simulating the life of meerkats, and the RTS is combined really well through the ability of commanding up to 9 meerkats to; burrow, fight, look-out and babysit, which you do by simply using the wii remote to click on certain points. 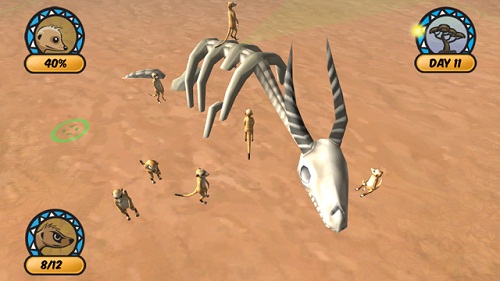 By commanding your meerkats to forage for food they will achieve this by attacking bugs and carrying them back to their burrows. This increases your vitality, which in return produces meerkat puppies, that take a couple of days to mature to adults, during this time you will need a babysitter to keep an eye on the puppies, which is especially important when predators come into the picture. It would have been nice if you could command different styles to the meerkats, such as create foragers and attackers, however like real meerkats, this is performed by taking turns.

Lead the Meerkats is infact a real fun game, although it may not be as engaging as Pikmin, it is definitely a great game, some may find it a little slow, and the controls take a little while to get used to, but with its cute graphics, and charming story, for a WiiWare title it is definitely one that I would recommend to those wanting to play something a little different.

Lead the Meerkats is available now on Nintendo WiiWare for 1000 points, we recommend it to all that are interested in Meerkats, or simply wish to check out something a little different.