It's suffice to say that Telltale Games have really been banging out a lot of titles recently, with Back to the Future and Jurassic Park coming out at the end of last year, the developers are not relenting, and have just pushed out the first three episodes of their latest franchise series; Law and Order as part of their Universal publishing deal.

Being relatively unaware of the 10 year running series, I'd little prior knowledge, however after five seconds in, it's easy to get the gist. Just like the TV show you take part in both the detective side of a particular crime, and the legislative side, similar to Telltale's previous series Jurassic Park, Law & Order is made up of short sections that rate your performance for certain actions, and each section can be reset at any time to attain a better 'score'.

The best way to describe the gameplay of Law & Order Legacies is much like a poor man's L.A. Noire, with a suspect or witness in conversation you will be able to ask them a series of questions, with your question answered you will be asked whether you think they were lying or not, and then be requested to back up your reason with evidence. 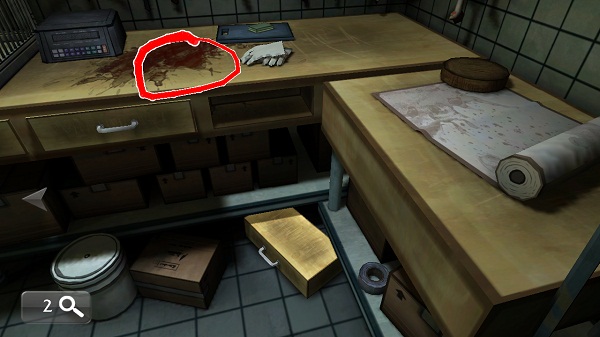 On occasion the game will give you trick questions as well as proposing very similar options for evidence to make sure you’re on your toes, rather than look to your suspect for the body language they are giving, you are concentrating on the facts of the case that you already know. If there is anything you are not sure of, the game makes a complete transcript of the episode available during particular sections where you may need it, which is particularly handy.

Alongside interviewing suspects there is the occasional call for some search work, this is on the border of seek-and-solve, and you are given a number of items to find in a space, where circling the item suggests it may be useful, to be fair the detective work is fairly straightforward, and it’s the legal side that gets very interesting.

On the other side of the bridge, the scales of justice are pivotal to being a first-rate attorney, and they will show you who the jury is swaying towards; the defendant or the people. The legal sides of the game are carried out like a true court case, and you will be required to examine witnesses and suspects, as well as cross-examine, and object to statements made by the defence. Yes you will be the one shouting objection, but this is the real deal, and not Phoenix Wright; every objection must be met by a reason, so whether the defence is badgering a witness, a suspect is using hearsay or quoting without expert knowledge, it is up to your memory and understanding to know when a character is giving a statement they should, or one that is simply being used to appease the jury. 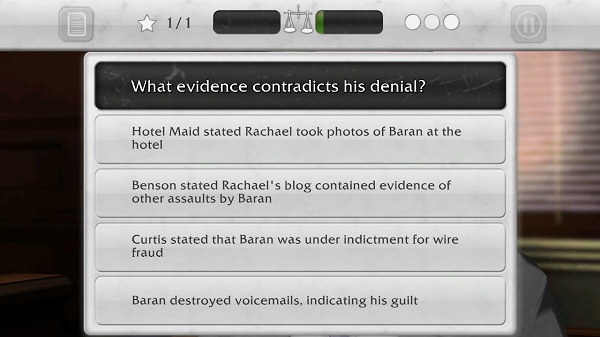 A nice touch to the game is that each episode is introduced how you would expect an episode of the series, you are treated to an intro with all of the regular characters in this episodic series; on the law side you’ve got Rey Curtis, Van Buren, Olivia Benson, as well as appearances from Lennie Briscoe and Mike Logan with characters Abbie Carmichael, Mike Cutter and Jack McCoy on the legal side, whether or not all of these characters can co-exist in the same space is beyond me, however surely fans of the series will be pleased to see some familiar faces. Contrary to pretty much all Telltale games, the series uses all fictional characters from the Law & Order series, and creates no ‘Telltale’ characters, which is quite a surprise.

You'll be graded on everything that you do in Law & Order; each interview or wrap-up has a star system where the more stars you receive the better your performance, and the better your performance, the more likely you are to increase your detective ranking, get something incorrect and you'll get a strike; it's three strikes and you're kicked back to the beginning of the section, however nothing changes, so the episodes are very easy to 'ace' by simply remembering what the correct choices are.

Yet another cue taken from the recent Jurassic Park game is the dynamic save system allowing you to stop playing at any time, and resume at your last checkpoint, so no need to remember to save, also because the series is based on your score and capability as a detective or attorney, each episode can be reset and repeated for a better performance. 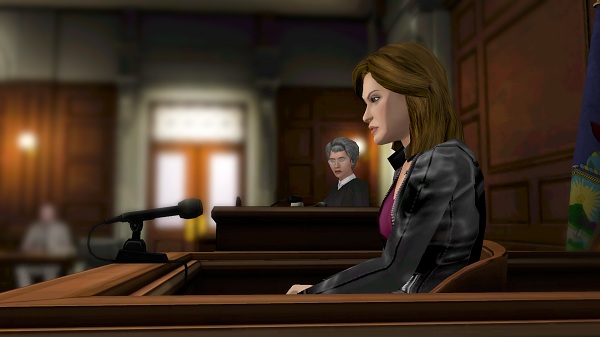 The style ofthe game is very similar to Jurassic Park, and takes away the cartoony approach that many fans will be familiar with, the caricatures of the Law & Order team are as spot on as the game can be without photo realistic representations, and the very distinct shadows on the models give an almost cell shaded appearance. It definitely looks and plays like no other Telltale game in the past, and if you are looking for a nice spin on the series don’t waste your time with the other games.

It goes without saying that Law & Order is a very simple game, the interviews and searches are in no way complex, after all if the game were so complex why would you want to play it, this does however mean at times some questions can be a little condescending to the player, whilst others work cleverly to trick you out.

Each episode runs at about 1-2 hours depending on your ability, and how much you get involved in the case, with a proposed 7 episodes you’re given an estimated 7-14 hours of gameplay, an extremely good standard for a paltry $20 game. 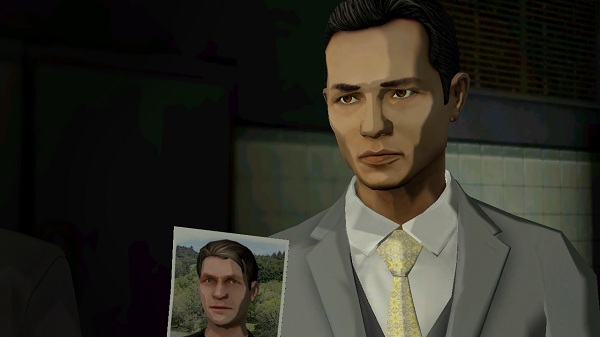 If you are fan of Law & Order then Legacies is going to be right up your alley, and if you’re looking for a new adventure game to play that puts you in the shoes of a detective AND an attorney, there is really no better a game, Law & Order is a brilliantly involving and though provoking game, and it just all works together oh so well.

Episodes 1-3 of Law & Order Legacies is available now for $20 for a full season pass fantastic value for money, and with episodes 4-7 on their way soon we cannot wait to see how a particular case ties up the whole series.