Battle Worlds: Kronos is the extremely successful Kickstarter from the developers of enchanting games like The Book of Unwritten Tales and The Raven, this time the strong adventure game visionaries have turned to the much loved turn based strategy, and surprisingly enough considering their lack of in-house games in the genre, it's really bloody good!

Battle Worlds: Kronos is a classic and simple re-imagining of the turn based strategy for the current generation, think Advance Wars or Battle Isle; everything is carried out with hexagons, you've very little micromanagement or base building, there's no need to worry about who will finish the space race first, just how you can use the strengths and weaknesses of your units to better your enemy. 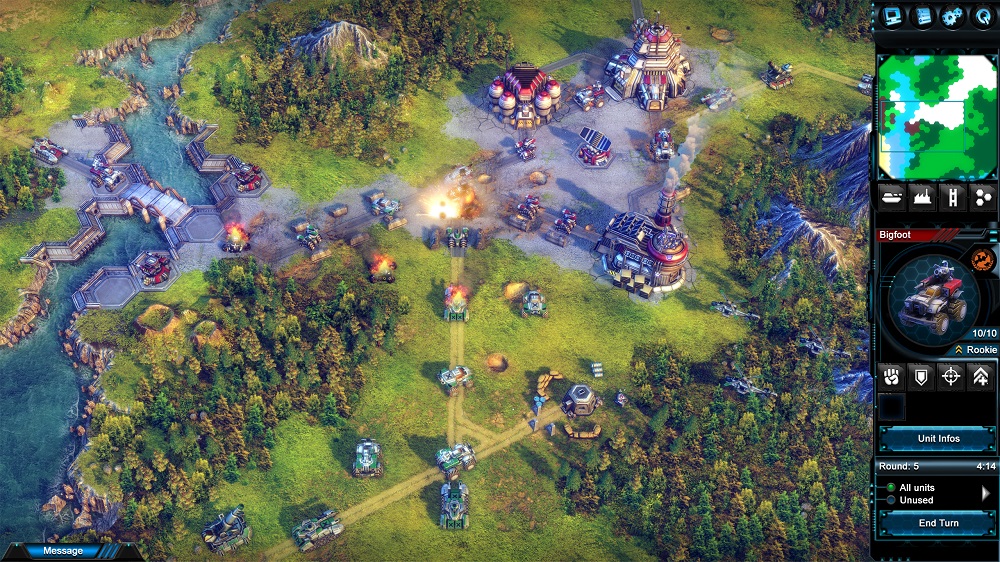 The world of Kronos is not one known for its peaceful traditions, in fact they're currently in their 120th war of succession which will determine their next leader in battle. You assume the role of Commander of the House of Telit the current leading faction, but don't let that get to your head, if you want to stay in the lead get ready to fend off a lot of competition!

We got to sample a very early version of the game across three different missions; your basic search and rescue, the age-old escort mission and an all out offensive that shows off the different sorts of scenarios that you can expect of Battle Worlds: Kronos and a good selection of the units you will be controlling. With only three missions to try out from the 30 hour campaign it's not very much to go on, however what we've seen is exemplary; the search and rescue starts off nice and easy, as you attempt to track down a lost cargo shuttle, you'll meet the odd enemy here and there but you've often the advantage, it lures you into a sense of security before you proceed to mission two where you'll find enemy reinforcements pouncing upon you from every possible angle, which is where your tactics will shine.

Units come with a possible three different actions; movement, attack and joker -allowing you to carry out either of the two aforementioned actions-, the versatility of a vehicle determines which actions it will have available as standard, some like the Bandit will allow you the use of two jokers, or others like the powerful Cerberus will be limited to one movement phase and one attack. Better yet you aren't limited to carrying out your phases in order, so if you find yourself deep in an enemy ambush at the start of your turn you can take a quick pot-shot before making your retreat to safety. 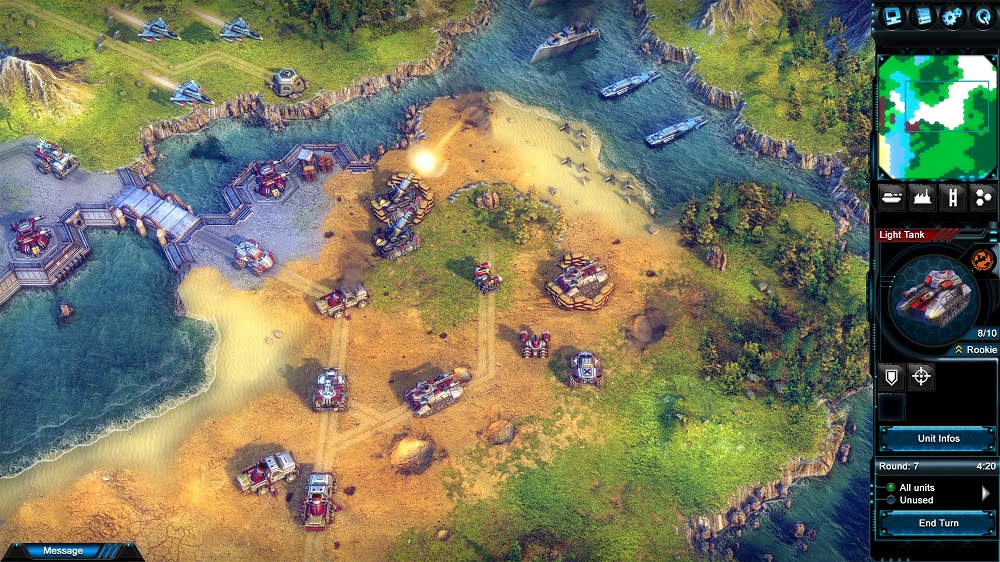 The game itself couldn't be simpler, however it is in this simplicity that a whole world of tactics and strategy emerges, the missions at our disposal contained several offensive units, all with glorious codenames such as the deadly mobile artillery unit the Hydra, the devastating light armoured tank the Cerberus or the aptly named scout unit Explorer, with these vehicles it doesn't take long to discover the strengths and weaknesses of each and the games' battle indicators allow you to judge when you should bring the big guns into a fight, or whether your lonely scout is simply a lost cause in a sea of stronger units.

To keep your battalion on the move, Battle Worlds: Kronos features an effective leveling system for your units based on their successful combat experience, which along with every decision in the game, can also be used tactically to your advantage; if there's no healing depot in sight you can surrender your skill point for an instant 50% heal, or opt for better firepower, or maneuverability. Higher level skills will give the chance to permanently switch a movement action for a joker, or give your unit unlimited counter attacks or an improved range of fire. Additionally each skill can be chosen before or after a unit performs their action, which allows you to increase your firepower and take out that enemy unit with just enough health to survive what would have been certain death at the start of their next turn, again, it's all about the tactics!

One thing that surely makes a change in Battle Worlds: Kronos is that the computer AI is extremely tactical as well; they won't simply sit back and take everything you've got, they'll duck and weave around your range of attack, go for your weakest units with their most effective ones, and wait for you to deploy your artillery before moving just out of reach, meaning that even the most experienced tacticians will get a run for their money. In Battle Worlds: Kronos it's not difficult to slip up, if you do happen to make a wrong move you will pay for it, and if you don't think out your every action you'll find your opponent picking off your forces one-by-one. 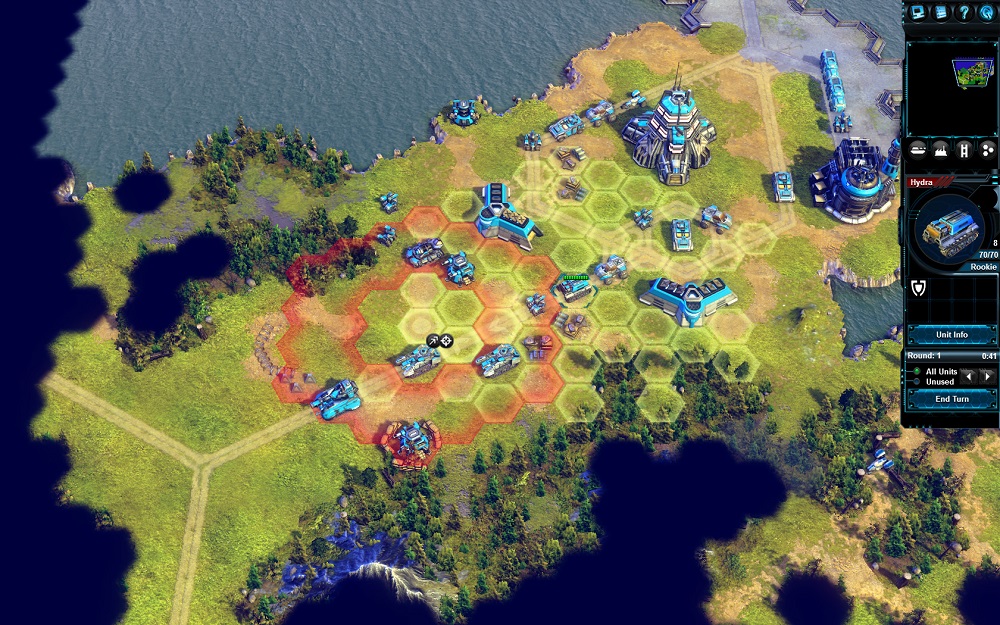 So perhaps you're not used to the classic handheld strategy Advance Wars, or you've never experienced a turn based strategy that doesn't completely rely on base building, so you might be wondering how your units will survive a long campaign, fear not, as you traverse the battle-torn world of Kronos you'll conquer many an enemy base, which will allow you to make use of depots that potentially contain vehicles for you to commandeer, alongside leveling your units you may also come across the odd repair and ammo chests that will keep your vehicles in tip-top condition.

You won't simply be battling on land in Battle Worlds: Kronos, and the game features 6 different terrains that only some vehicles in the air and sea will be able to traverse, requiring you to take to the skies and sea to better your enemies, creating an even deeper need for strategy when you're on edge of attack from all angles! It's not just the fog of war you'll have to be keeping an eye on, to make battle even more interesting; destroyed units leave wrecks behind that can easily result in your units being pinned down with nowhere to move, so whether you're fighting in large open spaces or in very tight areas you'll never get away from the need of thinking a few moves ahead.

Whilst we only got to try out three levels of the campaign, Battle Worlds: Kronos features a full dual campaign single player as well as a variety of challenge maps, however if you're looking for the challenge of another human Kronos features live or hot-seat gaming and asynchronous multiplayer giving you all the time to plan your moves, a bit like the oh-so-traditional play-by-email system.

Battle Worlds: Kronos is the turn based strategy that you always wanted to enjoy but could never really find, fans of the Battle Isle series will feel right at home in this brilliantly tactical game that truly brings a classic play style back to the genre, from what we've had the privilege of playing it is most certainly clear that KING Art games have not simply made this game for gamers, but for the fans of Advance Wars or Battle Isle, for themselves, and you can tell in every loving detail.

Battle Worlds: Kronos is scheduled for release before the New Year for Windows PC, Linux, Mac and browsers for multiplayer, what we've seen so far of the game is extremely promising, if you're waiting for a traditional turn based strategy, this is the one to look out for!