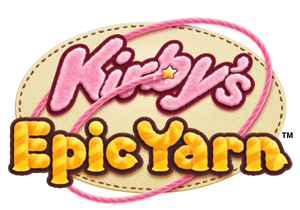 Now one game that I know a lot of people have been waiting for has finally been given a release date, and that is Kirby’s Epic Yarn. Now you may think 'Kirby? that's a kids game!' and just dismiss it but this is certainly one game that all Nintendo Wii owners should definitely consider picking up.

I luckily had the chance to play Kirby’s Epic Yarn back in July, to be fair it was pretty much the first game I rushed to but I was definitely not disappointed with what I played, as it was probably my favourite game of the whole event.

In Epic Yarn Kirby finds himself in a world entirely made of fabric called Patch Land, the evil sorcerer Yin-Yarn is behind the goings on, and Kirby now has to find all the strands of magic thread in order to sew Patch Land back to its original form, get rid of Yin-Yarn and anyone else who gets in his way.

Kirby’s Epic Yarn is one of those games that doesn’t come by that often, and can be likened to the original Kirby’s Dream Land titles mashed together with Yoshi’s Story. Luckily you don't have to wait that long as come February 25th 2011 it will be available for those in Europe on the Nintendo Wii.