The first thing that of course almost immediately comes to mind when I first played Kingdoms of Amalur: Reckoning is that I'd already just spent a large portion of time playing another open-world RPG, Skyrim. This is not necessarily a bad first impression at all, as of course Skyrim is an impressive game, but you wonder if people are ready for another massive injection of a fantastical fantasy universe. 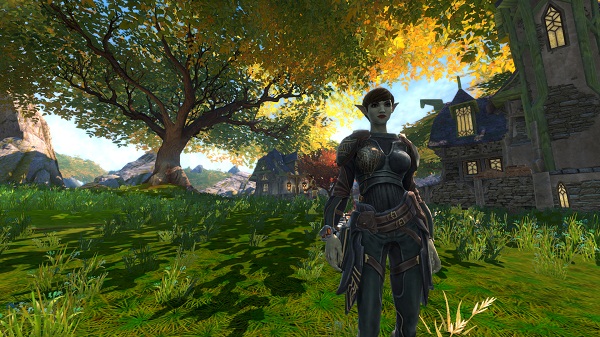 At the start of the game you are able to fully customise your character, allowing you the options to choose the gender and one of the four races from the game; Almain (noble Humans), Dokkalfar (Dark Elves), Varani (nomadic Humans) and Ljosalfar (Light Elves), each with their own specialities. While also allowing you to choose the path of one of the three classes available; Might, Finesse and Sorcery.

Although it felt very similar to Skyrim in a lot of aspects, it contains some very unique features that set it aside; one of the most enjoyable was the combat system. Instead of feeling like you're playing an RPG it has more of an Action/Fighting game feel, mixed among the overall mechanics of a role playing game. The combat helps add a fun factor where you can choose what moves comes next by the feel and timing of the fight.

To make sure the game looks great alongside the impressive combat system the animations have been closely researched with powerful poses for big weapons teemed with powerful hits, or on the other hand quick and nimble reflexes while using daggers or other small weapons.

Then as an extra addition to the action style combat system there's an elaborate combo system to go with it, you can build up from basic attacks to special attacks to finish off an enemy, and also use magic abilities which vary from simple lightning bolts to a whole meteor shower to rain down on your enemies. The combo system is so varied that you can even make up your own combinations with the weapons and magic that you have, that someone else playing the game may never see. 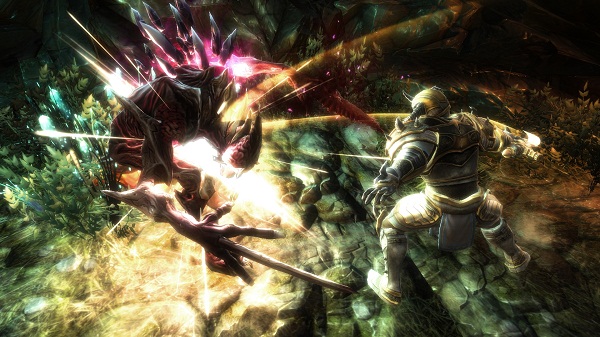 As you progress to a higher level the combat system follows the usual RPG elements, allowing you new abilities and skills to unlock, better weapons and bigger magic spells. These can be upgraded with Amalur's talent tree system which gives you individual experience depending on your preferred weapon used in combat.

The larger special attacks are carried out in a very stylish cinematic view, giving the feeling of explosive power, making you grin as you see your enemy crushed and pummelled into the ground.

There is also a Reckoning Mode which is gained from filling up your "Fate meter", this mode allows you to slow down time and perform several types of combo moves to multiple enemies making it very useful when outnumbered. As you defeat enemies their fates begin to unravel, once all enemies are unravelled you're able to perform a fateshift to finish them off in style and use up the rest of your fate energy, while gaining a little bonus xp. 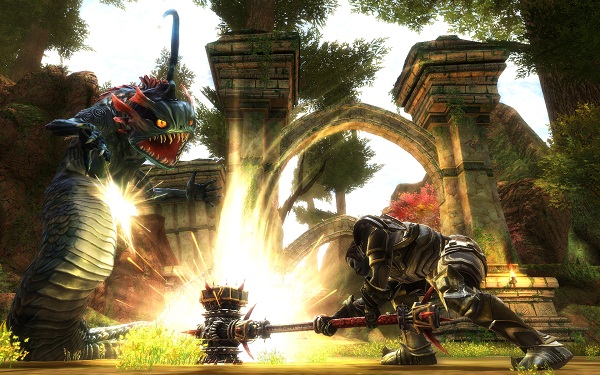 As you would expect from a fantasy game there are a large array of strange and wonderful creatures to see and slice to pieces, although not literally. As you get to harder locations in the game the enemies become more impressive and give you more of a sense of accomplishment when taking them out.

To add more meta game there are a variety of skills and crafts for you to take up, including Blacksmithing, Sagecrafting and Alchemy, giving you the upper-hand by making your own weapons and potions without having to spend your money or hope for a piece of loot. However if you don't want to spend your time picking herbs you can also build relationships with people by either charming or intimidating them to get what you want.

The World of Amalur is huge, and when I was introduced into the true open-world areas in the game the first thing that caught my eye was how vibrant it was, the detail and colour choices are akin to the brighter areas in Fable and certain locations in Enslaved. Showing less of a gritty environment like most fantasy games do at the moment. 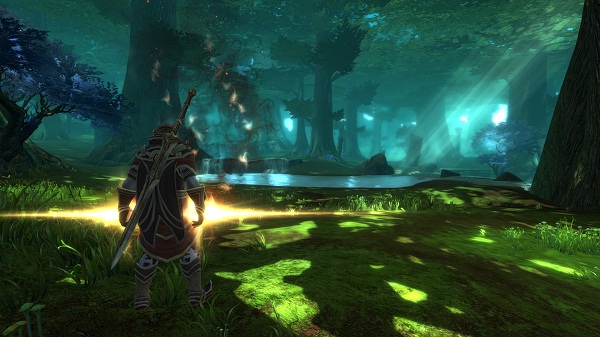 As you would expect to accompany the main story there are hundreds of side quests to give you a little more to do within the environment, unfortunately I didn’t get long enough to explore the whole world but as the start was exciting to explore, I can't imagine how amazing the rest of the world is. Dependant on if you want to complete every side quest and create every potion the game can take around 65 hours to complete, or you could just rush through it, but then it wouldn’t be the same experience.

I did notice that the loading times; similar to Skyrim are very long, however if played on PC this will be dependent on your hardware, or if on console hopefully installing it to the hard drive may speed up the loading times a little. This seemed to be the biggest flaw of the game, obviously because of the sheer scale of the environments that they’re loading in when exploring a new area. However with a world waiting to be explored and lots of enemies to smash apart, you won’t mind waiting too much as you’ll know there’s an enjoyable game just about ready to play.

I really enjoyed playing Amalur and with the development being spread across 38 Studios and Big Huge Games, the written words of R.A. Salvatore and the artistic direction of Todd McFarlane, they’ve all gotten together to create an interesting game that’s tried something different with their combat system, at least for a role-playing game.

Kingdoms of Amalur: Reckoning is available on Xbox 360, Playstation 3 and Windows on February 10th, if you can't wait that long you can always check out the demo which is available on both consoles and Origin/Steam for Windows.