Most stories’ end at the reign of King Arthur at Camelot with the Holy Grail, nestled in amongst the Knights of the Round. However this is where our tale begins, when a powerful witch reaches the Formorians; once banished by the powerful Sidhe, the future does not look so certain. After attempting a ritual, King Arthur is left for dead, the Holy Grail destroyed and the whole realm is left if chaos. With the relentless force of the Formorians using gates to enter from Samhain across Britannia, the Kingdom has fallen in just a year, as the son of King Arthur it is up to you to save Britannia in King Arthur II the Roleplaying Wargame.

For those unaware, King Arthur II is similar to the Total War series; battles are lost and won in real time skirmishes, with an overarching map where you carry out diplomatic affairs, and the adventure quests that further the tale of William. The map exercises turn based movement that revolves around the four seasons, and it is in the cold winter months that the role-playing element of the game comes into play allowing you to level up your unit’s stats and skills depending on the experience that was gained for the rest of the year. The role-playing aspect really gets you attached to your units, and you’ll curse heaven above when your archers that fire with true accuracy are taken down by a lowly group of cavalry. 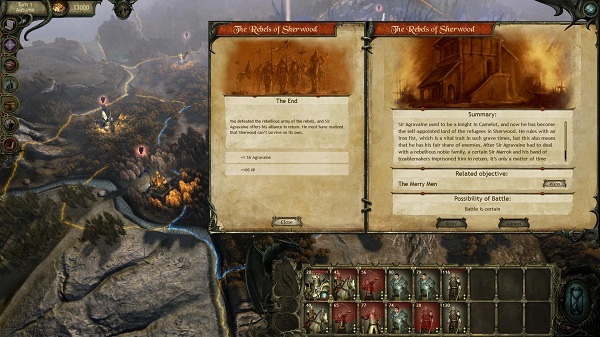 What makes King Arthur II so different to many other RTS games is that rather than be based on fact or historical reference in a very brief passing tale, it is a beyond doubt just as strongly rooted in its story as it is in fantasy; the game’s tale absorbs you to no end, and this is where the adventure quests come into play. Everyone remembers the good old Ian Livingstone Choose-your-own-adventures of the nineties, well think of the adventure quests like these but with far less death, granted, the choices that you make in the adventures are not going to change the face of Britannia, they can however spark the difference between becoming an evil tyrant of men, or a ruler of the people, and whilst on the battlefield your strength and strategies are taken into consideration, in an adventure your morality is at stake.

Although William Pendragon is the son of the legendary King Arthur, and a fearsome knight and leader, everyone has their off-days, and when you begin the game some of the first battles are graciously challenging, you’ll find your strengths, your weaknesses, and your most effective units will come out vastly stronger for it, however nothing will prepare you for your first few scraps with the unstoppable force that is the Formorians.

Despite having the whole of Britannia on your backdoor, King Arthur is a surprisingly linear experience, you’ll not be able to travel to many areas for the amount of ‘impossible’ armies that require your progression to a particular stage before they suddenly become of average strength. Of course in such a story driven game this is not surprising, however the player could have surely been given a touch more freedom. 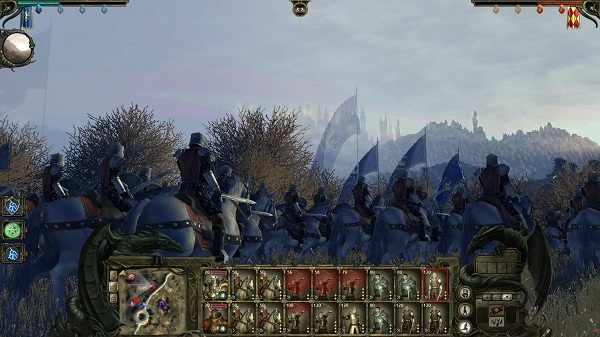 In a world of fantasy, you’ve more than your standard unit types, with wizards, druids, shape changers and the Sidhe you’ll have your hands full with the fabulous selection of fantastically deadly magics, don’t be fooled however, a sole fireball cannot win you a match, in order to balance the magics each side in a fight has a magical shield and if a spells penetration is too low it is likely to just bounce off of their shield with no effect, making magic more of a strategic option rather than simply allowing you to blast your enemies away.

However, depending on which path you take from the very beginning of the game, the road can be a little challenging at first, but the true strategists will find that it does not take too long before you will have amassed a practically unstoppable force, and very soon into the game you’ll find that gold has no real value, so much so that you’ll be throwing it at alliances, treaties and uploading your army without a care in the world taking away some of the strategy in your army management.

You can shape your quest with Research, upgrading Provinces and creating your own Artifacts, these allow you to focus on particular types of infantry, gain bonuses on a particular hero’s army and use the tools that you pick up in battle to make the most legendary pieces of armour, rings, staffs and even warbanners, essential when you are commanding more than one army. 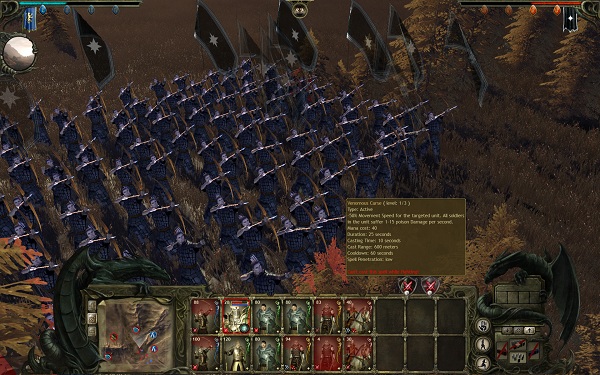 One feature of the game which we couldn’t praise highly enough in our preview of the game’s prologue; Dead Legions was the game’s narrator. He gives the title a truly lost fantasy film quality, after all, how many games have narrators these days?! As a narrator he performs his sole purpose by the book, and engages you into the story, characters and performs so many different accents it's uncanny. You just want to curl up into a corner and allow him to regale you with the tales of King Arthur and his son William, as the battles are fought without you.

That said, the game is not without its issues, whilst it is far more stable now than at its release, the load times can get rather tiresome, and loading between battles, the map and even quitting can get old fast. The same can be said for the camera which compared to similar RTS titles, feels clunky, obtuse and just difficult to use, that and without the ability to truly observe your battles from afar you are missing out on a core requirement of the RTS genre.

King Arthur II The Roleplaying Wargame is a brilliant if not flawed Total War with unicorns and dragons, well there aren’t any unicorns, but if you are looking for a challenging, enjoyable, and very much story-driven real time strategy you won’t find a better one out there. Although the load times can get a little tedious and the camera works different to many games in its competition you’ll be so engaged by its tale you won’t even notice.

King Arthur II The Roleplaying Wargame is available now from all good retailers and via most digitial distribution platforms for the SRP of £34.99.