Welcome verily to the Kingdom of King Arthur, the great King has defeated his adversaries in the South, however his control does not reach everywhere and there are strange lands beyond the Forest of Bedegraine, and it is up in the North that our fair tale takes place; in the haunted lands of Cumbria. Are you brave enough to venture into the untamed wilderness where monsters and savages dwell?

King Arthur: Fallen Champions centres around three very different characters on their own personal quests; Sir Lionel, in search of his lady who was captured by the evil Red Knight, Lady of Corrigan, a Sidhe trying to find her way home, and Drest the Chosen, a Pict Shaman driven by visions to lead his disgraced people to greatness. 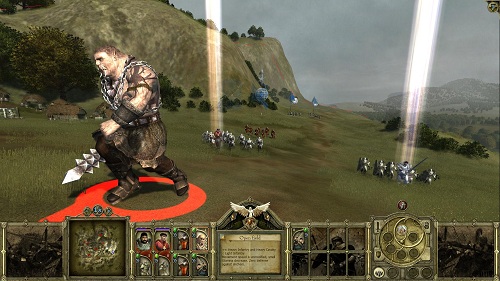 The three characters are all very different, Sir Lionel is your standard tanking warrior, allowing powerful attacks, and can be joined by healing monks. He and his band of loyal men are almost unstoppable, and he is undoubtedly the most conventional of the bunch, and gives the game a very simple RTS feel. Lady Corrigan is your standard white mage, and with her variety of healing and offensive spells she definitely has her weaknesses, but some damn strong spells. Drest the Chosen is the one champion that I personally did not expect to enjoy; he’s the Shaman, a practitioner of the dark arts, and one of the most enjoyable, unstoppable forces in King Arthur: Fallen Champions.

In fact, Drest took me so much by surprise, I need to justify the greatness of his short campaign; whilst the actual theory behind his spells and powers are laughable, the Pict shaman has the ability to raise the dead from the bones of the fallen. These ghosts will fight for you, and, mana permitting, he can summon ghost wolves for a quick and effective boost to your unit numbers. This may not sound very powerful, but combine this with the spell Draining Blast, and you have an endless supply of mana produced on the death of enemy units. It is finding little exploits in the characters that makes you realise that Fallen Champions is so short, because just as you cement your favourite character, your time with them is up.

Each character has three episodes, which does sound a little short, but the episodes are made up of two parts; adventure and battle, which is where the game becomes interesting. The adventure part is sort of a mini Choose Your Own Adventure, where your choices can mean bolstering your army ten-fold or losing your precious men, if you remember the old Scott Adams adventures, then you'll love the inventive addition to an otherwise standard RTS affair, just don't go expecting an epic Ian Livingstone novel, it's more like a few pages. 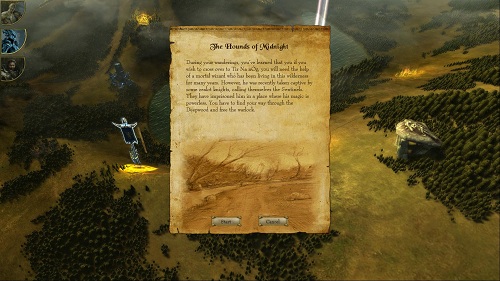 The battle section of each episode is a skirmish that occurs as a result of the adventure, and you won't find one skirmish the same; whilst some missions are linear explorations, others are standard RTS open field skirmishes. Almost every episode includes special location-centric spells, attacks and buildings that can be used to your advantage, such as the spectacular oil lakes in Drest’s campaign that serve as your only defence against a colossal army, or the Monuments of Valour that allow you to crack lightning bolts upon your enemy.

The roleplaying element of the game allows you to level your heroes’ skills, give them new abilities, and equip them with the latest items that you pick up in battle, you can access this before every encounter, which is also one of the most disappointing points in the game; you can only save at this point. Whilst some of the missions last a mere 20 minutes which everyone can finish in a simple sitting, some missions can last up to 3 hours depending on how you play them, and you’ll have no option to save half-way through a big mission.

There are almost no reasons to fault Fallen Champions, especially with the extremely reasonable price tag, however alongside the lack of saving opportunities there are an overabundance of niggles that will grate at you. The music, whilst very suiting to the game, can get repetitive at times, similarly the camera can get infuriating, and as RTS’ go, zooming into battle can be a little cumbersome if you are used to the standard top-down-zoom-in. 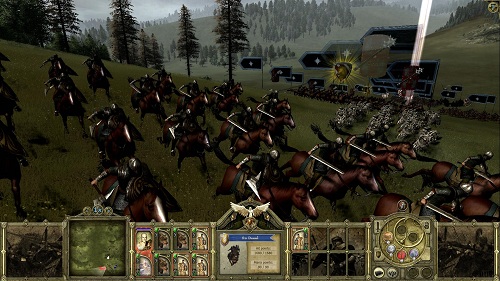 Whilst King Arthur: Fallen Champions is not the longest game, the RTS gameplay coupled with the RPG-style levelling makes it a short but refreshing venture into the fantastical world of King Arthur, if you are looking for an enjoyable strategy game that delivers a little bit of everything, you’ve no better at such a great price.

King Arthur: Fallen Champions is available now for the low price of £7.99 via most digital download portals including Steam, and Gamersgate.