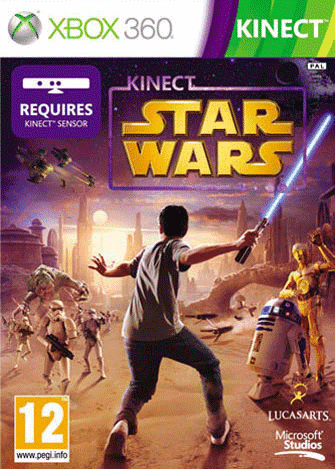 A long time ago in a galaxy far, far away, back when you used to wield anything and call it a lightsaber, your time is here, put down your controller, and clasp your hands around that lightsaber handle you've been wielding since you first saw Star Wars. Because by hell Kinect Star Wars is as close to the real thing you’re going to get, and for once in the franchise you really get to forget about everything and just have plain fun!

Set several years after The Phantom Menace some fans may be turned away from the time period, but remember this isn’t written by George Lucas, and there isn’t a midi-chlorian in sight! For the old school Star Wars fan this may not be your cup of tea, however they’ve managed to sneak some old faces into some of the game’s other modes. 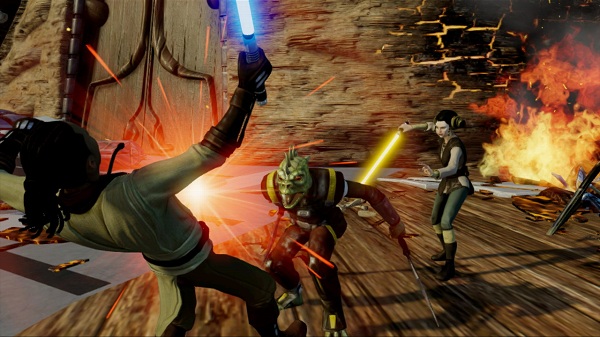 With a choice of 8 Padawans ranging from Twi'lek, Zabrak or just plain humans, heck there’s even a Bith in there! The whole game is co-operative friendly so you have the option to have a second player accompany you throughout the story with drop-in/drop-out capabilities. You literally take control of a Padawan trying to stop an invasion on Kashyyyk from the oppressive Trandoshans, which unveils a plot designed to throw the Republic into an all out war that will take players on a journey through many different locations like Felucia and Coruscant.

You’ll also get to use a variety of vehicles such as the iconic Speeder Bikes for a high-tense chase where you can steer, use your turbo and break through the woods, or battle up in space and shoot down the enemies of the Galactic Republic. The games story mode is surprisingly fun to play, like most Kinect titles it is based on rails, and to get between sections you will jump, crouch, dodge, dash and get a lot of exercise through play! 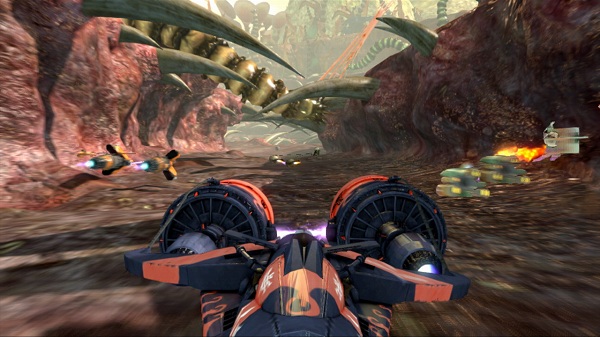 Now the Story mode is not the only thing to play about with? With another four game modes Kinect Star Wars is bursting full of content, so be glad you’ve waited so long for its release! It also boasts pod racing, the most fun spin-off the Star Wars universe has ever seen, which allows players to step into their favourite pod and race around 6 brand new tracks across 5 planets including Tatooine, Bespin and Utapau. Players are given the choice of several pod racers with the opportunity to unlock several more well known racers.

Despite them all being new, the tracks are exciting and will challenge even the hardiest of racers, players can take part in a full career mode alongside quick race mode that allows two players to quickly setup an event of their choice and get racing. Controlling the pods is exactly like the fantastic arcade machines for the original Episode 1: Pod Racer, and thrusting and turning is achieved with a slight move of your hand. 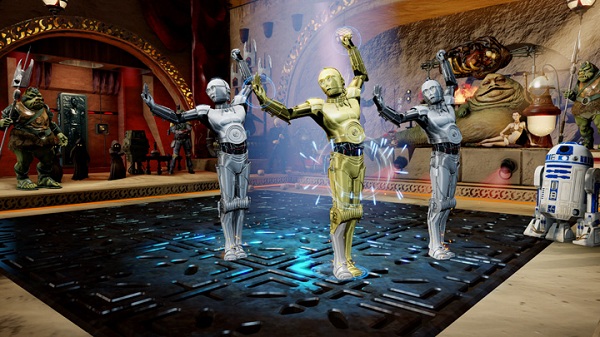 The next surprising mode is Galactic Dance Off that gives players the chance to take part in a dance off with another player and some well known faces from the Star Wars universe to songs that many people may recognise as they are songs that have been redone with a Star Wars theme. Songs such as Gwen Steffani's Holla Back Girl becomes Hologram Girl and Christina Aguilera's Genie in a Bottle becomes Princess in a Battle.

Once you get over the slightly cheesy animations, and the ridiculous situation, then this is a very enjoyable mode to play, don’t be a hater, just let go and have some fun! Once again this is more than just a few songs, and new characters, songs, and advanced and extended versions of the dance routines can be unlocked by earning stars and doing well. Though be warned, you’ve never seen Han Solo or Lando Calrissian like this before! 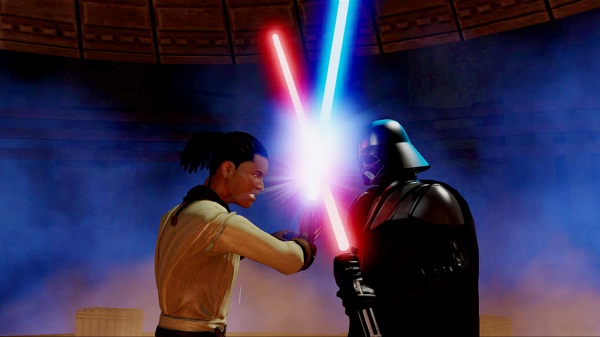 Duels of fate pits your Padawan versus one of five selectable opponents that include a Sun Guard, Count Dooku and even Darth Vader, the duels are broken down into sections to add variety, but are the lightsaber duels you’ve been waiting your whole life for! Whilst a lot of the duels consists of blocking, winning a clash and taking a turn to try and take off your opponents head, it is fun for the first few times, unfortunately the novelty does wear off a little. The duels are fairly simple, but they still allow you to wield your lightsaber against some of the Dark Sides finest.

We’ve saved the best till last! The final mode is Rancor Rampage where you take on the role of a Rancor and run around one of 4 different planets destroying everything in your path, bonuses are awarded for smashing a number of buildings, eating people or droids, and a variety of other tasks. You will unlock new planets and another Rancor by levelling up, doing what they do best and destroying as much stuff as possible in a time limit. For ultimate fun, and the best score I highly suggest running and flailing your arms, angry Rancor noises do not need to be provided, but are highly encouraged. 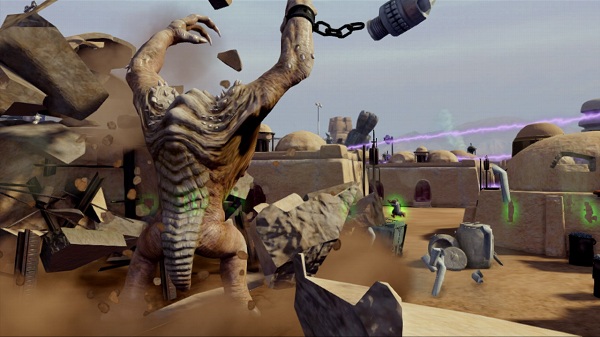 Overall Kinect Star Wars for the most part is a very enjoyable game, as a fully Kinect game there are times when the commands I was trying to execute would not happen or as was the case of pod racing the exact opposite of the gesture would occur, but I've found that this happens with even the best Kinect games, it is just a shame to see it in a game that has been in development for so long.

But, where else would you get to be a Jedi, a racer, a monster and a dancer all in one game? If you've always wanted to do all of these and as an added bonus they’re all in the Star Wars universe, you should not hesitate in picking up Kinect Star Wars on Xbox 360 Kinect! It's pratically five games in one.

Kinect Star Wars is available today in all good stores and online retailers for the SRP of £39.99, please do be aware that in order to play, you will need a Kinect Sensor, if you don’t have one already, why not pick up the Limited Edition Star Wars 360 bundle!