I absolutely love point and click games, ever since my father brought me home a copy of Manic Mansion I've been hooked. It's one genre that I have been and will forever be drawn to, so whenever I get the chance to play a new one I jump for it.

Kaptain Brawe is a completely new game from Cateia Games. It doesn't stray far from the usual point and click formula but this time it's a light hearted romp through space. By incorporating a nice mix of old style mechanics and some new ways for newcomers to experience this style of game how does it hold up?

You're placed in an alternate universe where space travel had been achieved much earlier than in our world. Thanks to this, people started colonising the far reaches of space leaving earth behind, however trouble brews up thanks to the "Kribbs" who are a form of space pirates who start pillaging the colonies. To cope with the Kribbs the rather aptly named Space Police were rallied together to fight against the evil pirates.

The game begins following the protagonist and his ensign (who isn't his biggest fan) on a routine patrol when they pick up a distress signal. Brawe being a big-headed-hero-captain decides to go in without back up and save the day. However this simple rescue mission actually develops into a quest to save the galaxy from unknown forces and stop "She" a ruthless bounty hunter. Overall the story is a light hearted space quest which spans across a few different planets. 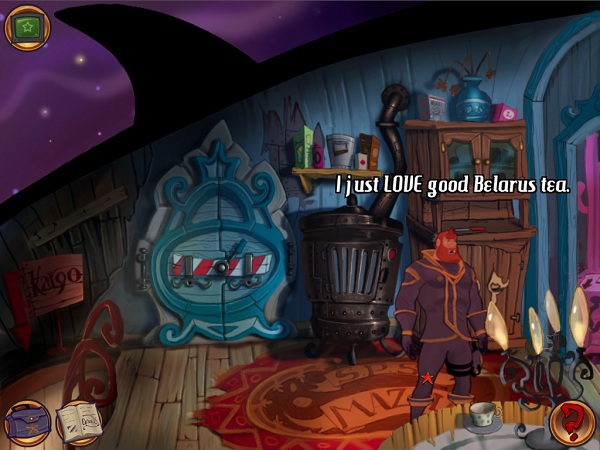 You play as the captain during the course of the game, how he has achieved captain status is a mystery as he quite a bit of an idiot. Think Zapp Brannigan of Futurama fame, mixed in with some dyslexia, less smarm and even more stupidity. To put it simply he's a great and funny character and surprisingly he isn't the main focus of the game as you'll control a woman called Agent Zero, she's there to keep an eye on Brawe's and Danny's actions. Agent Zero is sadly a largely forgettable character but Danny is more memorable and has some great lines. Both these characters are controlled exactly the same as Brawe but will need to be swapped out on occasion to accomplish certain puzzles.

Captain Brawe wouldn't be a point and click game without it being jam packed with puzzles and Brawe is completely full of them. There's a good range from classic problems, to new uses of old formulas. The amount of memorable enjoyment and time you spend with a point and click depends on its puzzles, as the game's successfulness will hang on them. Brawe is successful with its puzzles most of the time. Like a large number of point and click adventures Brawe suffers from a lack of guidance at times descending the game into a huge mess of clicking on everything until something works. Luckily you don’t have to pixel hunt all the time thanks to the games in built button to show you what in the current scene can be used, similar to that found in Telltale’s Wallace and Gromit series. Sadly even with this feature the game can still be disappointing and can occasionally slow it down to a crawl at times. Apart from these issues, most of the puzzles are fun and challenging in a good way.

Difficulty wise the game is a mixed bag, some puzzles flow quite well and don't pose that much of a problem but as mentioned above you do run into a few bad ones which fall into bad puzzle design, where logic is thrown out the window. This can at times be pinned down to poor explanation of the puzzles. Thankfully though while some puzzles pose a challenge there are only a few that make you fall into utter despair, wishing they would go away. Perhaps my brain just can't handle it any more. The game also comes with two different difficulty settings, neither of them actually change the puzzles like other games such as Monkey Island but rather streamline it. The casual setting just allows players to click on objects and the appropriate action will be used, in hardcore you must choose between observing and using objects. Casual mode also includes a hint system where players just click on an objective in their quest log to get hints, unfortunately this can also hinder the player as some hints are worded poorly. 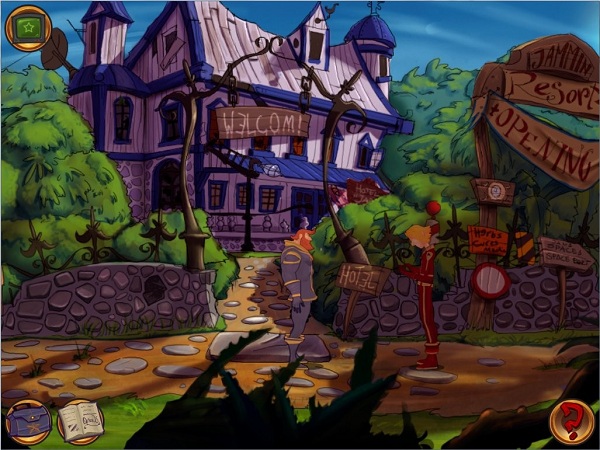 Any old school point and click fans will see what Brawe is trying to aim for, a nice deep dive back into the good old days for the genre. The game definitely gives off serious Monkey Island vibes through its art and soundtrack. The art is all 2D and appears hand drawn which all flows together nicely with the 2D characters exploring the environments. The characters aren’t as detailed as the backgrounds, however this is usually how adventure games flow together. Sadly the characters and backgrounds do clash at some points thanks to strange colour choices but this is a rare occurrence or two and doesn’t happen all the way throughout the game. The music is also pretty well done with a good mix of space age, reggae and foreboding tracks that flow together very well. The only negative is that one of the music tracks becomes annoying thanks to its overexposure in the game.

Kaptain Brawe is a good little adventure that will last the average player around 8 hours, maybe less for a seasoned point and clicker. If you want a new adventure to play in the style of some of your old favourites you can't go wrong with it. It does fall short with some of its puzzles bordering on blood boiling and its hint system isn't quite there yet. The casual play mode is also a great feature and one I hope to see in more games like this.

Kaptain Brawe: A Brawe New World is available now on PC digital download for £14.99 and is scheduled to be released on the iPhone app store in the near future.