A lot of people have an aversion to insects and all forms of creepy crawlies, whether it be from a bad experience or just not liking them because of the way they look and move. It’s a pretty common dislike among most people sadly, but believe it or not, there's a lot of people out there that keep cockroaches as pets. Put any dislike to insects aside, or bring your love of them forwards as maybe then you could consider having a look at Journey of a Roach, a game about cockroaches, very cute cockroaches.

Journey of a Roach is a tale about two cockroaches who decide to venture out from their habitat in search of something more beautiful, something living, giving them a smidge of hope that there's something better out there. Journey of a Roach has been developed by Kolbold games who are a fairly new and upcoming Swiss indie developer, it's their first large scale project for a big publisher like Daedalic Entertainment, and for a first project it’s definitely looking like a very promising point and click adventure game.

Throughout our preview we played as Jim the cockroach, who was constantly having to look out for, and save accident prone Bud. Jim and Bud live in a post-apocalyptic world under the Earth’s surface within an old defunct vault. Well the last time Bud was up on the surface he spotted a tiny flower, giving them hope that there’s somewhere better than where they currently live. The idea of living flora up on the surface gave Jim loads of optimistic ideas so they decide to go back up to the surface, however along the way they’re confronted with all sorts of dangers. Notably because you're playing as Jim everything does tend to happen to Bud, but we didn't mind helping a friend in need. 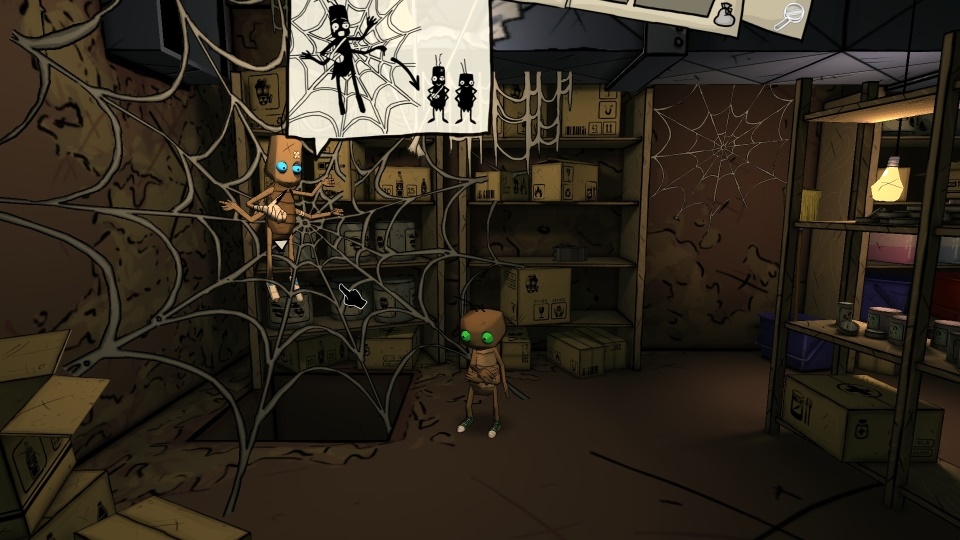 Jim and Bud are of course a more attractive variant of what people might imagine when thinking of cockroaches. They aren't overly detailed characters, but it matches the visual style of the game, while not being so simplistic that they could pass as any old beetle. By retaining their cockroach look and by giving them adorably large bulging eyes allows them to create a bit more emotion to emanate from the characters, making them seem more believable and lovable. Of course if they were overly realistic it could create a nice contrast between a cartoony environment with photo realistic cockroaches, but it would probably creep a lot of people out, similar to Joe’s Apartment.

As you’ll notice from the screenshots, the developers have chosen a cell-shaded style for the game, this means that striking bold colours work really well for the environment along with minimal detail for adding a hint of realism. Due to the location of dank sewer systems and underground rooms the first segment of the game did feel a little brown in colour, but we imagine it'll be spiced up the further you stray from their home. The cel-shaded approach also means that through characters, environments and audio that it feels a lot like a nicely balanced cartoon experience as the innocent and childlike nature of the cockroaches helps round this off. Making it a brilliant game for children to play as well as adults, or you could even have a child watch you play as they'll probably get as much fun out of it as you do.

The music itself is quite playful in nature and fits nicely with the innocent childlike portrayal of the cockroaches, you could also compare the music to the same playfulness as Banjo Kazooie. Unlike the music which suits itself perfectly with every situation we were presented, the sound effects as you may guess are a little unrealistic and more comically childlike, but this fits perfectly with the visual style. It's also potentially because players may not like to hear the hiss of a roach for communication, so it's better to create adorable characters, instead of deter players with realism. Immediately upon hearing Jim and Bud converse with each other I thought of children's television shows where they don't speak but make cute noises reflecting on what you would imagine they'd be saying.

One of the most interesting pieces of the game is the movement choices you have which are purely as a result of you being a cockroach, plus of course the developers thinking of creative ways to make the game feel different to other point and click adventure games. This means you can walk around as if you were a roach, you can climb up walls and even walk around on ceilings. Sadly this doesn't give you complete free roam, as you will come across pipes which are used as blockers to stop you from getting where you shouldn't be. But it's definitely nice to have the freedom of movement for a change, also causing you to think more about your accessible locations. Control wise you use the keyboard for movement and the mouse to interact and if you’re too far away from an object you’ll get a little pictorial speech bubble pop up explaining you need to get closer. 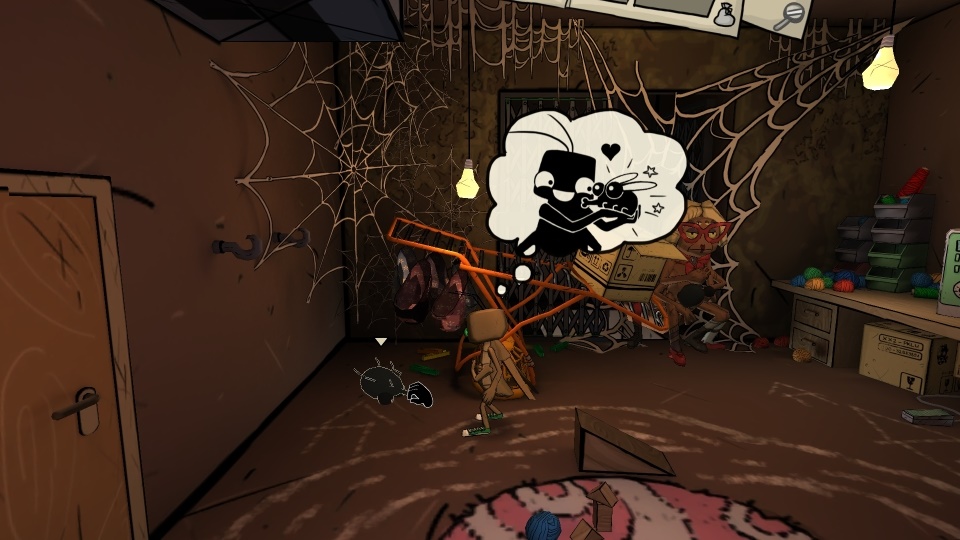 From the short segment of the game I was able to play it was actually very full of puzzles, however as an adventure game with no dialogue this is understandable. It started off early with very simple and short puzzles, leading you in to how the game plays and then finished it off with a long but rewarding dilemma. As they’ve taken an oath to only allow communication through visual means and little noises from the roaches, it does mean the developers have had a slightly harder job than the average adventure game, which can also create some possible confusion for puzzles if not explained correctly. With the section I played each puzzle easily explained the situation either through the setup of the environment or the illustrative speech bubbles, or of course a mixture of the two. Plus as all puzzles we experienced were isolated to one location it meant there was no moving around through rooms, trying to figure out what on earth to do next, like you can experience with other games.

I can't say I ever got to a point where I was stuck as all the puzzles explained themselves very well, however of course it might mean that some players could find the puzzles too easy, but as it seemed to be the start of the game you would expect a difficulty curve in the puzzles, so hopefully the full game will have even more challenging and rewarding puzzles for us to look forward to.

The story is conveyed mainly through short animated movies where once again the cockroaches express their emotions through little noises and overly cute facial expressions. Other than these scenes the environment has a large influence on telling the story and explaining what is happening, which is exactly what you want from an adventure game, if the rest of the game is similar they've nailed it. You'll also meet other characters in the game who add flavour to the game, we met a maternal spider with the cutest little fly babies that it was protecting, not eating them as you would usually expect. So we can't wait to see what other interesting and surprising characters that they have put into the journey of these little roaches to help or hinder their passage. 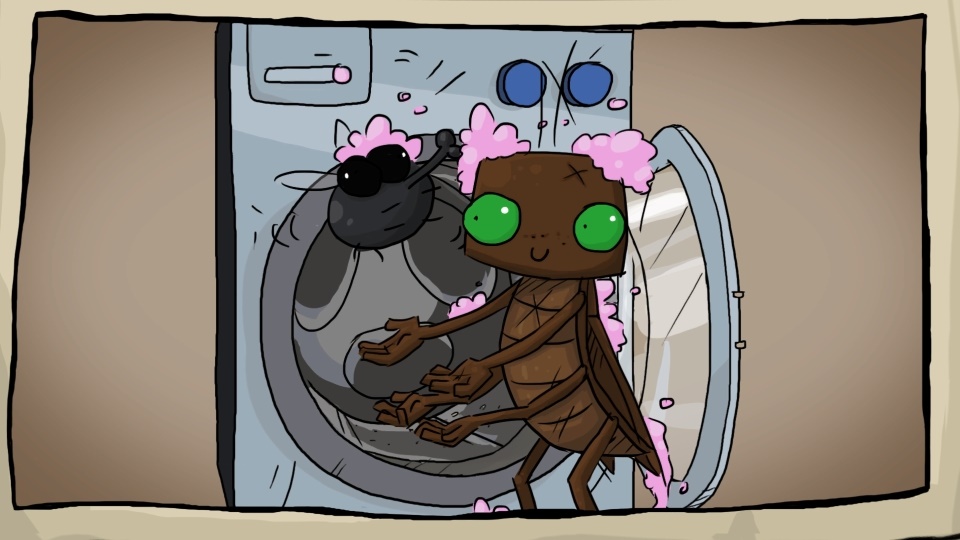 Overall Journey of a Roach has the potential to be a great adventure game with a really charming story with lovable characters, plus there's no worry of cheesy voice acting. Journey of a Roach is going to be available on November 5th on Windows and Macintosh and we can’t wait to carry on with their journey to the surface.