Yuji Naka is a name that most would associate with Sonic the Hedgehog and SEGA, well that's all in the past now because Yuji Naka is now the frontman for Prope Software a Japanese based company that Yuji Naka founded back in 2006. Well it's now 2010 and Rising Star Games have brought us Prope's latest game to the Nintendo Wii and Nintend DS, Ivy the Kiwi? 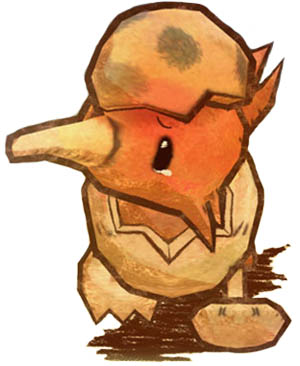 Ivy the Kiwi? Is their newest title to add to their growing collection and it is a quick reaction puzzle game that follows the journey of a very young kiwi on the search for her mother, and by travelling through puzzling stages and navigating around obstacles in the way, Ivy hopes to find her parents at the end of her adventure. The story of Ivy is shown like a children's picture book which introduces you to the story, and also the visual style of the game.

Ivy the Kiwi? is a mixture of puzzle based gameplay along with fast reaction times, so think on the verge of Sonic gameplay but you don't physically control Ivy. The controls are pretty simple as there isn't much to learn and they are taught to you throughout the game by a talking sunflower, they will take a little getting used to, especially if you haven't touched your Nintendo Wii in a while, plus you need to master the controls to get the best times and all those feathers. All you need to do is simply draw vines for Ivy to run along, these vines can either act as a simple path that can't be too steep or if you draw them the right way you can scoop her up to launch her a greater distance. As the game progresses you will get more ways to guide Ivy that includes launching her by pulling a vine while she's stood on it, this can then be used to destroy blocks or remove enemies who would otherwise try to kill Ivy. 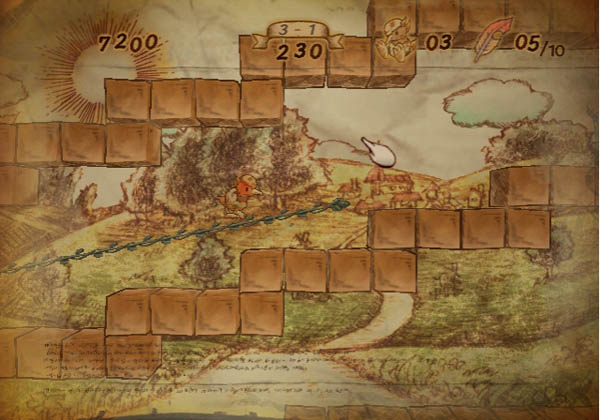 At the start of each level you're presented with the location of the goal and then a very quick glance over the level allowing you a very brief moment to breathe before the level starts. Each chapter contains five levels which take between 2-3 minutes or so to complete. Although the levels are timed so you'll want to get to the goal before the timer runs out. The goal is represented by a podium similar to the castle flags in Super Mario Bros and they work on the basis of if you land on the top of the podium you get the most points (500) and if you get Ivy to land on the other legs of the podium you then get less bonus points, rewarding you on how accurate your vine placing is.

When being weaned into the game in the early stages you'll find Ivy pretty hard to accidentally kill, however as the game progresses you will be faced with very cleverly placed spikes as well as rats, crows and droplets of water so if you don't place that vine quick enough you'll come to a sticky end, especially when Ivy is immediately killed after coming in contact with any bad entities. To make the game slightly easier though in very tough places there have been star cookies placed at key points throughout the levels, if you use one and happen to get in that sticky situation of falling on some spikes you have 10 seconds of invulnerability keeping you safe from harm's way from the instant you used it. The only other pickup in the game are red feathers which are conveniently hidden around the level as well as being placed in dangerous places, by gathering 10 of these Ivy gets an extra life. 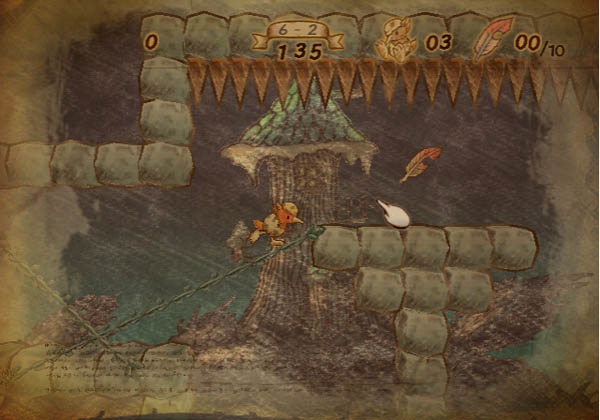 Ivy the Kiwi? also features a co-op mode, wherein if a second Wii Remote is turned on while someone is playing the main game or stage trials you can aid the player in getting Ivy to the goal, so you then have two helping hands, making the game a lot easier at times. The multiplayer mode featured in the game feels similar to that of Sonic 3's it's a race to the goal for 1-4 players, with the added difficulty of everyone's vines affecting everyone else's play. So you could do the nice thing and not block the path, or you could be really mean to your friends by putting your vines directly in their way.

As an extension on the main game those perfectionists out there have the chance to play through the levels again in Stage Trial, this will allow you to play those past stages over and over again to get the highest score possible or to hunt down all the feathers, allowing you to nail those 100 levels in the game.

Ivy the Kiwi? is a beautiful little game that I would recommend highly to those who play games regularly, and less so for a newcomer to games, or a young child as they may find it fairly hard to pick up and play. Although hard and tricky at times the game plays very well and provides a well rounded and hugely adorable experience that will keep you entertained for hours.

Ivy the Kiwi? Is available on both Nintendo Wii and Nintendo DS and has an RRP of £24.99 for both versions. It's also worth knowing that for every copy of the game sold Rising Star Games will be donating 10p to the Save the Kiwi charity, which helps raise awareness about the almost complete extinction of kiwis. It is also worth knowing that Ivy the Kiwi? Is also available on WiiWare and DSiWare however the downloadable versions only contain 50 of the levels and not the full 100.